Friday I met with Bob’s sister, Merry, to brainstorm some ideas for Bob’s Celebration of Life service: this is literally my 2nd funeral – I usually don’t even go when there is a funeral. I just can’t: I want to remember them the way they WERE and skip the way they went out. My FIL’s funeral 6-1/2 years ago, was the 1st one I ever attended with my husband and I was a mess before the day was out! I love my FIL; he was a good man: Bob was a lot like his father – kind, gentle, generous to a fault, loved his family, was devoted to his wife, a good provider, easy-going, always ready to lend a helping hand … a GOOD person to know. I am not implying that either were saints, BUT they came pretty close to sainthood as far as I am concerned ;-)

And I can’t skip Bob’s Celebration of Life gathering; ((((I)))), more than anyone else, needs to BE present.

Merry and I tossed thoughts back and forth and came up with a workable, informal, inclusive type of gathering. Rosburg Hall is booked – foods will be provided by the Hall (they have people on call that will provide a buffet of foods), and attendees that have food allergies can bring their own dishes and drop them at the Hall before proceeding to Eden Valley Cemetery to our familial plot which will have been prepared ahead of time – I will be at the cemetery way ahead of everyone because I want to be there while it is being prepared to have my final moments alone with Bob before his cremains are placed. Then the rest of the family/friends will arrive and gather to pay their respects, share Scriptures that speak to the moment if they so choose, and of course a sharing of personal memories with Bob as the focus. At the close of that gathering, there will be backtracking to the Hall to eat, catch-up chit-chat, and sharing of more memories.

Before I left Merry’s, I laughed and said, “You all thought it was pretty funny one time when Bob and I were visiting, and I said “‘I thought Bob looked like a golden god’ when we were dating” – but it is true: he was eye candy; but awesomeness with substance.” And Merry laughed and said, “Well Val, you were right though – Bob was a good-looking man!”

And he really was. 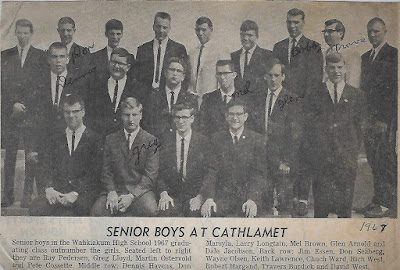 Bob’s Graduation Class picture: he is 3rd from the right, upper corner. He filled that suit out real fine ;-)

He was tall and physically fit – not muscle bound to the point of ridiculousness like some men think they need to be: Bob was always comfortable in his own skin; he didn’t feel the need to preen and strut his stuff. But people sat up and noticed him whenever he showed up because he was {all that} and more. When he spent time in the sun … and he did, constantly … he tanned beautifully to a chestnut brown skin color with a golden sheen, his hair took on golden sun-kissed streaks throughout it, and his gorgeous hazel eyes even had gold flecks in them that swam and pulsed around his iris’. And that sexy smile of his was pure gold. He was “golden”. His physique rivaled any of the paintings of ancient ‘gods’. And he was magnificent to look at when he was actively engaged in water skiing, golfing, working around the house, ect.: his form was excellent and his motions fluid. Not only was he handsome, he was beauty in action. 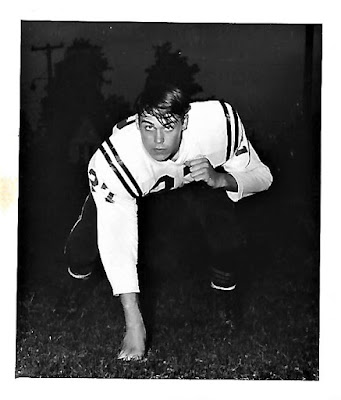 Bob’s football picture – number 27. He wisely kept this from me because he knew how much I loathe football: I do not like it at all! It is a blood sport and kids die on the field. I never gawked at the school jocks. I never went to football games. I did not watch them on TV with family; and I do not want to hear them in the background at holiday gatherings. I truly did NOT KNOW when I married him in 1974 that I was saying “I do/I will” to the LOCAL FOOTBALL STAR! He was very wise to keep THAT INFO close to his chest until the ring was on my finger.

He was altogether attractive. And I never tired of looking ;-)

In May sometime, I will be making a trip to Eden Valley Cemetery alone to time the drive, jot down directions – including landmarks, and just enjoy a day of “going home”. I have always considered that far end of Wahkiakum County “home” … looooong before I even met Bob face to face and learned his name, I spent every weekend in Graysriver: I walked there from Skamokawa and Cathlamet and it was an all-day-walkabout – I liked walking, and I had a nice set of legs because of it. LOL.

I did not know until after we were married that Bob’s mother’s family were early Washington pioneering families that had settled in and owned quite a bit of property in the Rosburg area, making the valley their final home. When I married Bob August 27th,1974, the valley really became my “home” too in a real sense: 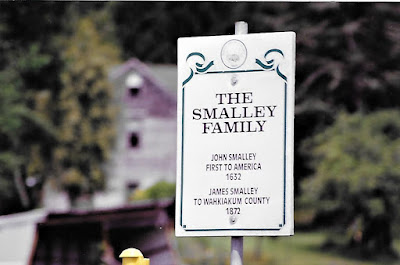 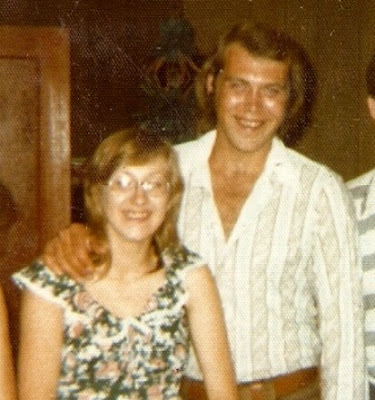 We actually looked at houses for sale there before buying here 20 months ago, but the asking prices were flat out ridiculous given what was being offered. But at any rate Bob's cremains will be going "home" in August. And I want to make sure everyone can get there without any snafus. Immediate family members and friends who have family themselves in Graysriver/Naselle area, know exactly where to go and how to get there; but children and grandchildren who left the area decades ago and rarely ever go any further than Longview if/when they come to visit, won’t remember how to get there – some grandchildren have NEVER BEEN past Rosburg Hall when Family Reunions were held there years ago, before Bob Sr. passed from this life to the next.

So it is necessary I make the solo drive next month to time the drive, and get the required information - I already know it, but I need to accurately jot it down for others who do not. It will be a difficult drive this time around because Bob won’t be with me … and the next time I make the drive, I will be ferrying his cremains to their final resting place. 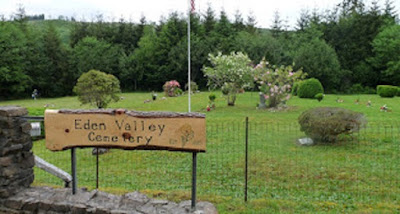 I had thought that I would ride to Eden Valley cemetery with the kids come August 30th, but thinking on it the other day I think it best that I take our car and drive solo even if I will be an emotional wreck: (1) I will be going directly to the cemetery waaay ahead of everyone else (2) It will be a highly charged emotional day – I may need to occasionally pull over into more than one of the several turnouts along the way before actually arriving in Eden Valley (3) the kids' car will already be pretty full – Alex with his 2 girls – 1 coming in from the east coast, probably with her fella; Alyna will be coming with her fiancé, Liam. I really need to take our car. And I pray I don’t jar the car in any way that will damage his headstone …