We have all been battling the Winter Bug Blues that seemed to take perverse delight in attacking each of us – one after the other – while one of us was trying to recuperate and rebound; needless to say we were all feeling punk and getting cranky. We left the house only when absolutely necessary, and then for as short a time-out-of-house as possible. The fellas basically laid around moaning and playing online games, and I got real creative with the left-overs from the skimpy meals I prepared; I cannot eat when I’m feeling punk, but the fellas don’t seem to have a problem wolfing food down, so I did my bit by preparing substantial meals without barfing while doing so … and then made it s-t-r-e-t-c-h for as long as I could get away with it before shuffling into the kitchen to pray I could stand up long enough to get another meal underway. NOT FUN!

During this hellacious time of upset tummies and migraine headaches that would have done the Inquisition Era proud, we crawled into the car and went into town to do an all-day-long-groceries-shopping ordeal 2 weeks ago and came home to a leaking kitchen sink :-( The small fry beat feet to the back of the house and settled in to watch TV drama, totally ignoring the drama happening in the frontend kitchen: LOL. Hubs manned up and did the right thing … he tore the sink apart and drove all the way back into town to get the pieces: 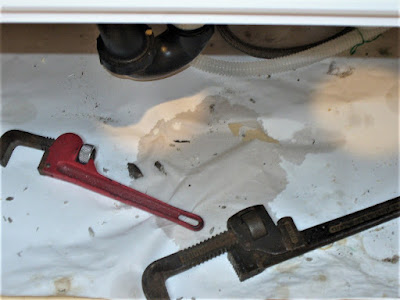 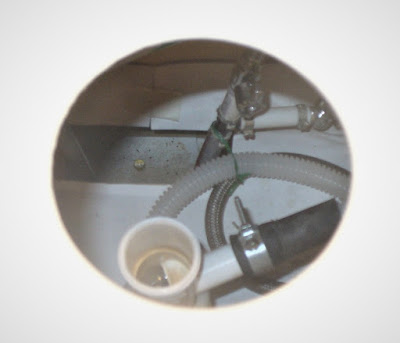 … and put the thing back together before he literally collapsed on the bed afterwards. He also bought showerheads that needed replacing too – but THAT would wait for another day ;-) 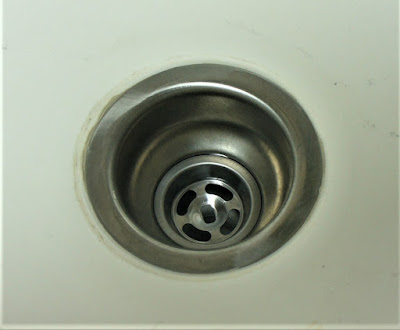 2 hours later the sink was fixed. This drain looks a lot nicer than that cheap looking plastic one. Hope it lasts longer too. This sink was  put in in June – not that long ago. 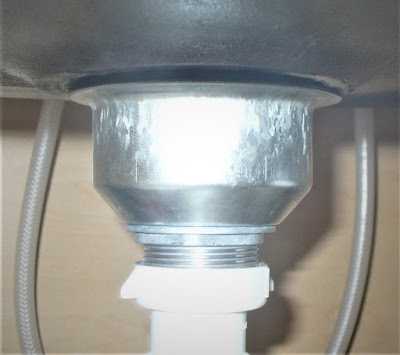 And I cleaned up, laid fresh paper under the sink, and put groceries away; falling into bed around midnight.

A few days later, Hubs switched out the bathroom showerheads too – ours had started to hemorrhage water around the base of the head … and the spare bathroom showerhead was so disgusting I refused to use it until it was replaced, taking baths only instead of showers; how the previous owner could stand it is beyond me – it really was d.i.s.g.u.s.t.i.n.g with black eewww in every spray hole! But now, it is new and spiffy clean ;-) 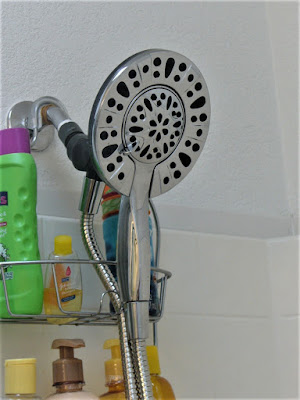 Feeling much better last week and starting to get an appetite back (which my fellas really appreciated), I got a little bold and whipped up a tasty potato salad because Hubs had mentioned earlier that it would be nice to have a change from the potato chips and french fries to go with their hot dogs I (with the furiously upset tummy) had been pointing them to when they mentioned they were hungry and didn’t feel like another ‘creative’ left-over meal. I hadn’t made this particular potato salad in years, and strangely enough, I was beginning to feel a craving for it, so I made it – and it didn’t take long before it was gone :-D 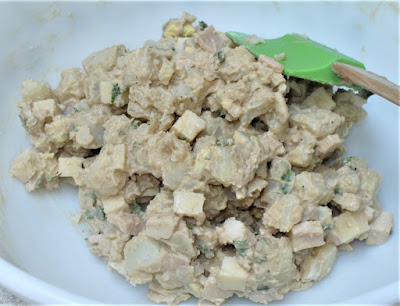 Earlier this week I whipped up 2 new MOD towel sets. A bright green knitted extra-wide Kitchen Towel/Dishrag Set earlier; and finished up a blue set last night; I like the patterned hem borders and think they should sell at the upcoming Bazaars – I am only doing 2 Bazaars this year, so I’ll be culling my cache and cutting back on new items like these: 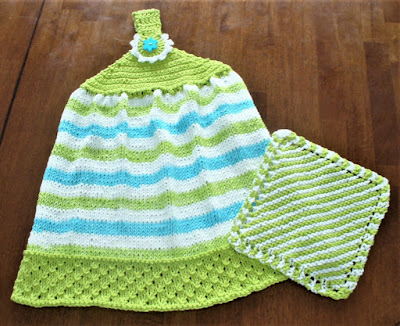 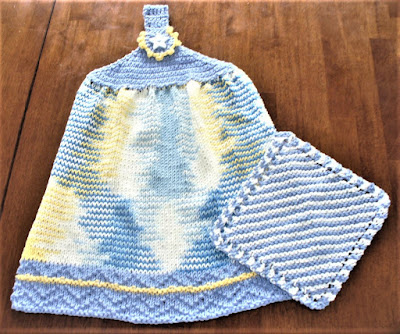 And today we all felt well enough to escape the oppressive sick house and make the annual Adna Floral Nursery run for potted garden veggies I don’t have any luck growing myself … and the local outlets only sell ‘Bonnie’s’ brand, which always dies on me and is a total waste of $$. So, feeling like we’ve chased the Grim Reaper out of our immediate neighborhood (hopefully for good this time), we hit the road, browsed at the Nursery’s roadside sale site, and came home with a pretty good selection of economical potted plants that should fare well and provide us with a bountiful harvest to take us through this year’s Winter months. I’m pretty excited to get them planted as soon as there is a long enough break in the weather to make that happen ;-) 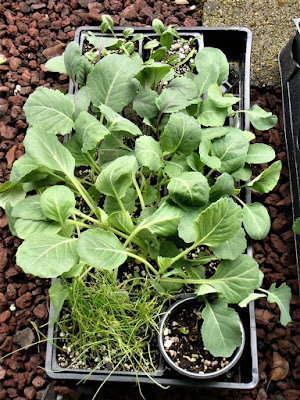 Today we drove to Adna to get potted garden veggies. All they sell locally is 'Bonnie's' Brand and I never have luck with those; THESE will grow for me, so the drive is worth it. 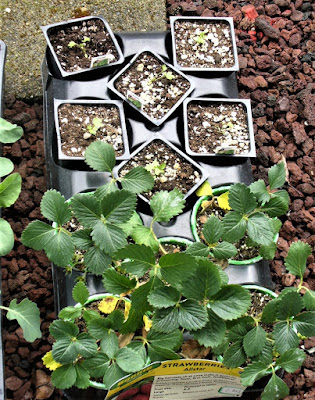 I bought the 6 Celery today - the 5 Strawberries were bought 2 weeks ago; they need to be planted in the Strawberry Jar soon ... leaves are already getting yellow - I HOPE they grow; I didn't realize that they are a 'Bonnie' plant, darn it! Maybe if I shake the dirt off them while planting them they {may} actually thrive - we'll see :-( 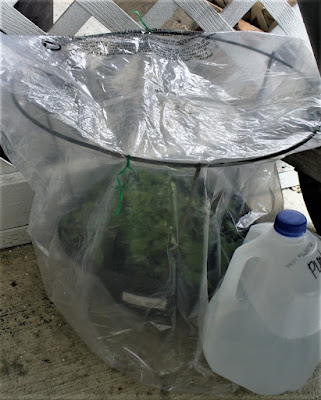 Since it still gets a bit nippy here early mornings and late nights, I rigged a mini-type of greenhouse environment for the Tomatoes until the weather warms up and I can get them in the Veggie Boxes. 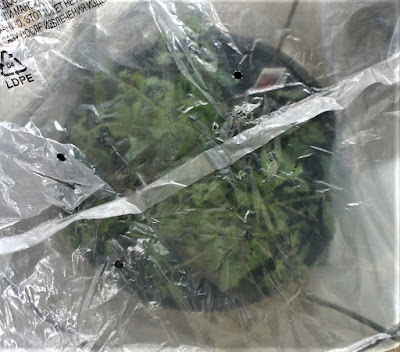 The 4 Tomatoes are a little crowded, but they should be okay for a few weeks until the weather warms up a bit more.

I also spotted a cute little $2 flower pot while scouting for my potted veggies, and that came home with us too ;-) The design changes with every turn of the pot … 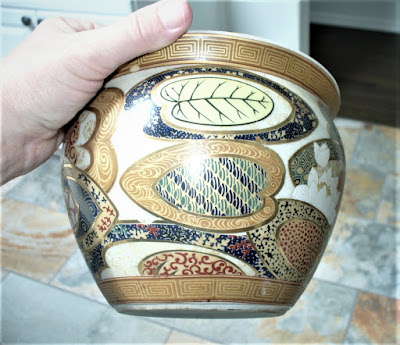 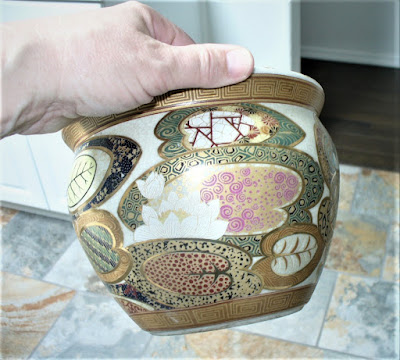 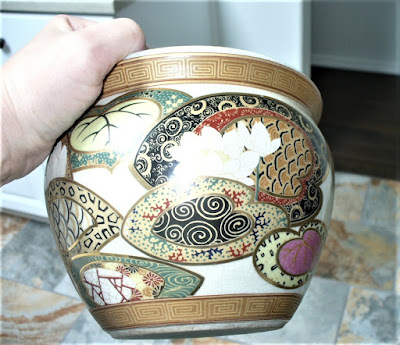 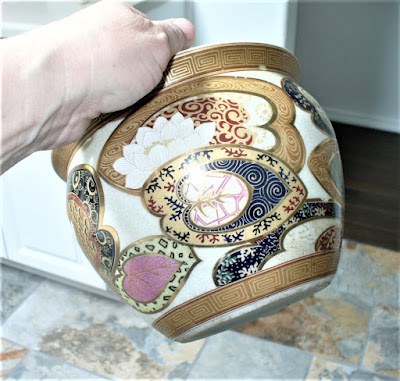 I really hope and pray we get some sunshine – soon!

I want to kiss the winter blues off; and get outside to get my hands dirty :-D