We were up before the sun yesterday, so rather than have a long boring day at home, I thought it would be fun to hop in the car and go see if there were any baby ospreys. And then we just extended the drive instead of coming back home afterwards. I kept saying Trout Dale instead of Trout Lake while taking these pictures – (obviously I was still tired and not fully awake yet); I KNOW Trout Dale is in Oregon, and I KNEW we were in the Gorge on the Washington side of the river, but dyslexia took over and it just kept coming out of my mouth wrong. LOL!

These pictures were taken IN Washington starting from Celachie, WA, where we saw an ancient volcanic cinder cone, moving along onto Cougar where we hoped to see Osprey nests … and found a mystery instead:

Still mystified and a little bummed, we decided to extend the drive and push on to Trout Lake. Along the way we pulled over at a scenic turnout a bit further down the road to view the backside of Mount Saint Helens, and continued onward to our goal via FS#30 in the Lone Butte Wildlife Area, which had us at 3,500 in elevation and in the midst of 2 thick black and red swarm; I assumed they were grasshoppers because their wings are that color too sometimes, but it was actually swarms of Cinnabar Moths: really small, but richly colored (our old alma mater colors; LOL) … 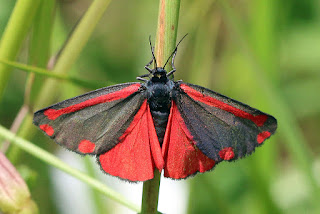 When we finally reached Trout Lake, we were 4,050 feet in elevation and spotted a pretty Tailed Copper butterfly: 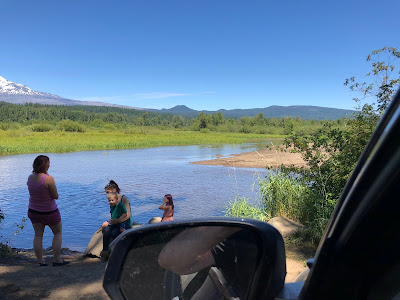 Disappearing Trout Lake being swallowed by weeds. Disappointing to say the least. There were 2 families already there with squabbling kids and racing dogs muddying the water; and parking and turning around was tricky. In another year or two this lake will cease to exist except in memories ... 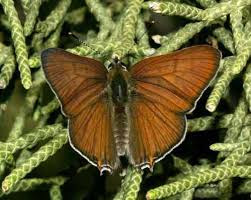 We debated whether to return home by backtracking through Cougar, but finally chose to revisit Carson because Hubs knows I love the Gorge area ;-)

So a little out of Trout Lake, we crossed a bridge and spotted 2 cool features on both sides of the bridge. Since traffic was heavy (on a gravel road in the middle of nowhere for Pete’s sake! And ALL of the license plates were Oregonian – go figure), Hubs pulled over and I walked back to the bridge to get a better look ;-)

And there were a few things we didn’t have time to visit, so we are planning on coming back this way again just to check them out. One is the Grist Mill on the south Lewis River (I want to get some honest-to-God REAL Apple Cider this Fall to make Fire Cider with); at this point in the daytrip we had already traveled 120 miles one way and it was time to head into Carson and homeward bound.

BUT when we neared Carson there was a blinking road sign that told of a wildfire near Carson … so instead of traveling the Gorge route home, we detoured across the Bridge of the Gods, crossing into Oregon to avoid the smoke and long wait, and ate Supper in Cascade Locks, and took the freeway home – where we saw a car catch fire along the freeway in Vancouver. It was a 90-degree day.

By the time we parked in our carport, it was late and we had tallied 244 more miles on the car. But WE HAD A FUN DAY :-D
Posted by Val at 8:17 PM No comments: