I had been thinking of knitting my own dish towels for some time, and as soon as Hubs started talking about possibly moving to southern California for the warmth it will afford his bones, I serious “got on it” and designed a sample towel with some odds and ends cotton yarn I had laying around ;-)

The towels I have now are getting thread bare and need to be replaced, so now is as good a time as any to whip up several new ones; and even if we don't move after all, I will still need new towels: 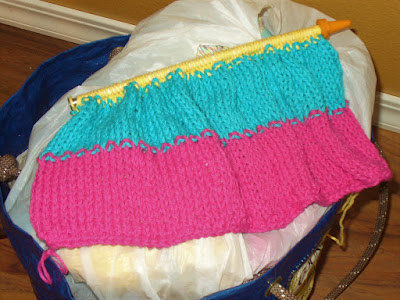 I like bright colors, and I started at the bottom and worked 3 big bold stripes that I think reflects the colors of the desert: a pink that matches a cactus flower, a blue that matches the clear blue sky, a bright yellow that reflects the brilliant sun overhead, and a blend of all the colors that brings it all together. Then I crocheted a buttonhole round to mimic the pincushion cactus and topped that with 2 pink cactus flowers and a sunny yellow button. 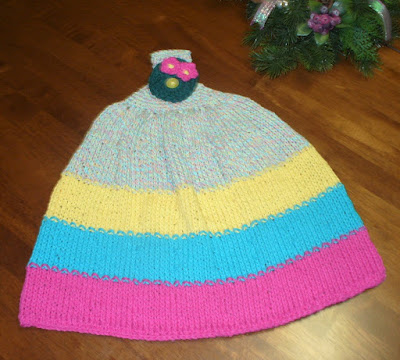 I like my towel; it’s nothing fancy, but it doesn’t need to be as I am keeping this sample towel instead of putting a sale tag on it :-D I have hung it on the oven door and will try it out tomorrow to see if will soak up water instead of allowing the water to run off its fibers and down to the floor like the store bought towels >:-(

If this towel proves satisfactory I will design more full length size kitchen towels with various patterns and leave off the topper. My husband is retired now and would appreciate a full size towel in the kitchen when he washes his paws in there instead of the half-towel I used when he worked nights. He is 6’2” with man sized hands and now that he's around all the time, I think that trumps my little tiny petite hands and little half towels. 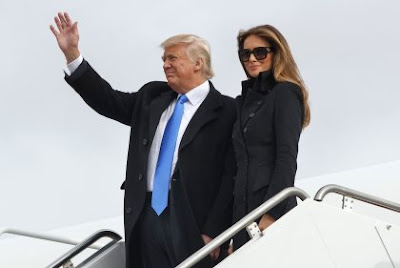 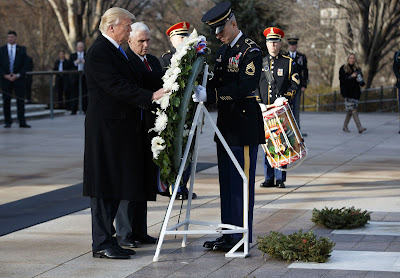 We are; and I can't wait for the obamas to vacate :-D

But the way it's playing out and dragging out, the obamas may have to be forcefully removed from the premises. I have never in my entire life - I am 60 years old - seen such poor losers that just hang on, and hang on, and h.a.n.g.o.n ... the sour-puss obamas behave like the White House is their personal property and show no signs of willfully vacating The People's House. It's bizarre behavior to say the least.

Twas the night before Inauguration, and up in the tower,
The Donald reflected on his newfound power.
The conservative masses had come out in force,
And delivered a victory that would chart a new course.
The snowflakes were shell-shocked with tears in their eyes,
The media lied to them . . . What a surprise.
They had been promised a Hillary win,
But the criminal Clinton took one on the chin.
And though from all corners celebrities flew,
They made no impression, for they hadn’t a clue.
They talked about climate, racism, and such,
And they made up good stories . . . But didn’t know much.
The fake news and ignorance came at a cost,
And they can’t understand all the reasons they lost.
They blame it on Comey and Bernie and Vlad,
But fail to acknowledge the one that was bad.
Yes, Hillary Clinton, in many ways flawed,
Was her own biggest hurdle toward getting the nod.
The campaign exposed her corruptness and greed,
And her speeches were punch-less as ten dollar weed.
So out in the streets there arose such a clatter,
It was Soros-paid protestors and Black Lives Matter.
With cities to pillage and windows to smash,
They knew not the issues, but needed the cash.
Eight years of Obama had given them cause,
To expect a replacement of their Santa Claus.
But soon the protestors will feel the pain,
When the wheels fall off of the old gravy train.
And now all the snowflakes are riddled with fear,
Upset and offended by things that they’ll hear.
The cocoa and crayons will help for a while,
But fact-based opinions will soon cramp their style.
I originally supported, and voted, for Cruz,
In the end, I would vote for whoever they choose.
He wasn’t my first choice, but soon I would cede,
The one they call Trump is the one that we need.
I saw him on TV in front of a crowd,
He spoke about veterans, it made me feel proud.
He spoke about energy, safety, and jobs,
Taking this country back from the Washington snobs.
He was dressed in Armani, all tailored and neat,
And the Brunos he wore made the outfit complete.
For a man of his vintage, he seemed rather fit,
And he looked presidential, I have to admit.
His eyes glowed like embers, his smile was the best,
And his hair was the color of my old hunting vest.
His love for this country was on full display,
And his actions spoke louder than his words could say.
He thanked all his voters, and before he was gone,
Saved thousands of jobs while Obama looked on.
The fate of this country left nothing to chance,
So, he filled out his cabinet weeks in advance.
The men he had chosen were of the same mind,
Let’s set the bar high, and not lead from behind.
He picked up his phone as he rose from his seat,
With a flick of his finger, he sent out this tweet;
“Now Mattis!, now Kelly!’ now Sessions! And Pruitt!
On Perry! On Flynn, You’re the ones who can do it.
Start lifting restrictions and building the wall,
Now dash away! Dash away! Dash away all!”;
The roar of his audience rose from the stands,
He kissed all their babies and shook all their hands.
He answered their questions and calmed all their fears,
They knew it would be a fantastic four years.
Then he jumped in his limo, and off to his jet,
A fellow that Liberals won’t soon forget.
He sent one more tweet as the evening expired;
“Happy Inauguration to all,
AND OBAMA – YOU’RE FIRED!”
Posted by Val at 3:49 PM No comments: