Woke up to a cold bedroom this morning. So I checked the temperatures gauges and saw it was 32-degrees outside; lifting the window blinds I saw that there was frost everywhere – on everything: plants, grass, rooftops … you name it, it was shiny with a silvery coating:

I noticed this cloud formation last night, and should have known that there would be frost this morning because they seemed to me to be a mild version of snow clouds, and we did get snow last year at the end of February: we rarely have snow for Christmas here in this region of the PNW – but we usually get it towards the beginning of Spring if/when we get it … 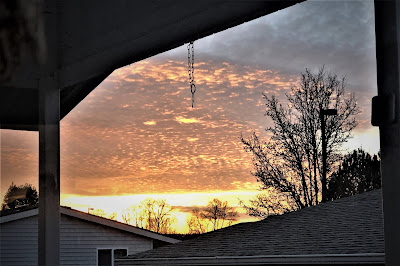 After I got my first cup of coffee, and the cobwebs across my eyes and my brain receded, I logged onto my Blog and reviewed posts from 2016 to current date; it was bittersweet as I relived times with my husband – the readings made me laugh and cry interchangeably. My husband was a good, and Christian man: I miss him, and I will always be grateful to Elohim that he was such a huge and vital part of my life here on earth.

Today’s goals are to sit in my husband’s recliner and not let it become a hindering sorrowing issue, and to pull the sympathy cards & put them away – now that I have started going to the Grief~Share meets, I do not want to be surrounded by mourning at every turn in my present life, especially in our home where I spend the predominant part of every day. Going to the meets and sharing and caring with the people there is enough grieving, and sometimes I wonder if even that is what I should be doing. Everyone says that going to the meets is a step towards getting back on track with the life I am left with, but we’ll see. Sitting around watching DVD’s of people (supposedly grief counselors, as well as grievers) STILL stuck in their grief after YEARS of losing a spouse, a child, or a parent doesn’t seem like ‘moving forward’ to me. But I have paid the $20 for the booklets – another unknown expenditure – and the people meeting together do understand what friends and family do not, so I will stick it out until May; I just am not sure it is actually “beneficially healing” in the long run: 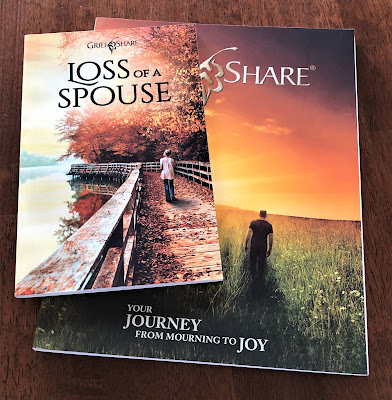 These meets may be fine and mean well, but in real times of hard times … I turn to Yeshua and lean on Him because He is really the only One that can really comfort, lift me up, and heal: http://jeastofeden.blogspot.com/2017/06/song-to-king.html

Last night, while working on another donation baby blanket for the local hospital’s beneficiary Medical Foundation, I started thinking of how many times since we started our lives together that Elohim has showered Hubs and I with great favor and mercy – there has never been a time in our lives together that Yeshua has not been with us every step of the way; including Hub’s final days at OHSU … 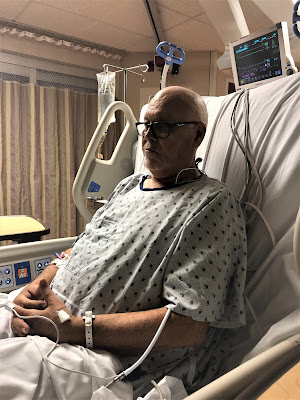 44 years later we were still living our lives together – facing life-changing decisions together: this is a picture of my husband contemplating what Drs had just told us and knowing death was a real possibility, firmly putting his life in the hands of Elohei; no matter what the outcome. A little less hair as he aged, but bigger faith as he matured. Though his stomach was bloated, he had by the time this pic was taken, lost 65 pounds. 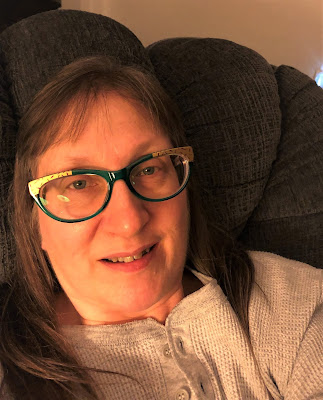 Taking selfies wearing one of Hub’s thermal shirts and trying to figure out his smart phone – still under contract, so I figure I may as well get use out of it;  so I am trying to learn all the device features. This feature is one of them - LOL I figured out the video making feature last summer before all Ron and Candy's ridiculous hell broke loose and destroyed our lives ... I have lost 25 pounds. I asked Elohim to help me lose weight - I never thought my husband's death would be the way it would happen. 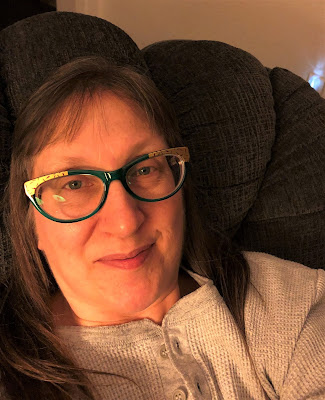 Looking at the pictures of us shown above, it may be hard for some to imagine that we are the same people because our appearances have changed as we aged over the past 44 years; but in our eyes, when we looked at each other, we always saw the young carefree couple in the wedding picture. And I chuckle every time I see myself wearing these glasses. Hubs saw these cat-eye glasses on a display rack last time we were in the eyeglasses place, and jokingly asked what I thought of them and if I would wear them; I LIKED them as soon as I saw them, so I said, “You bet!” And bought them ;-) They fit my creative and imaginative artsy-fartsy personality (http://jeastofeden.blogspot.com/2017/09/bazarr-season.html). And I think he knew that too :-D Still not a lot of gray in my hair … but Hubs did comment before he passed that he was seeing more and more gray showing in my hair after the hospital ordeals began.

As it is so nippy outside, I figured I needed to eat something a bit more fortifying than a hasty bowl of dry cereal/milk, so I cooked up a small portion of basmati rice (tastes so good! And smells good too) and mixed it with the 5-Bean Soup I made the other day: 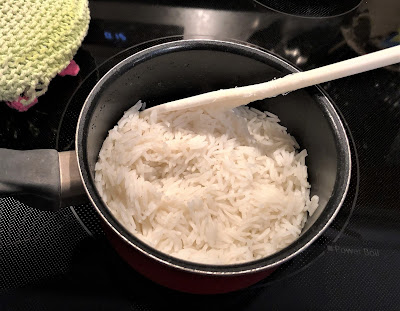 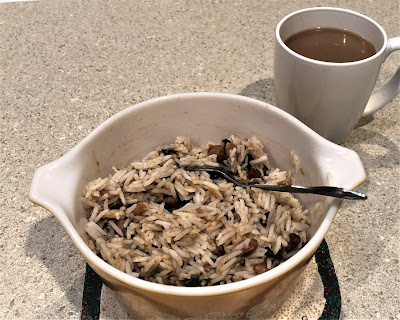 Well, fed and sitting in “the recliner”, I suppose it is time to get back to work on the baby blanket. Hopefully it will be finished in a few days … 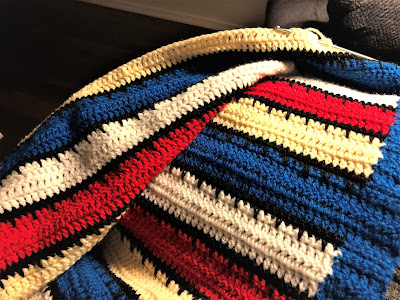