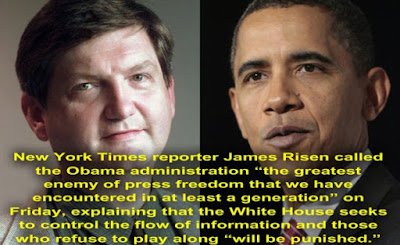 The libtards and demogods are waging yet a.n.o.t.h.e.r biased and hypocritical critique.

barak hussain obama has a history of having reporters FIRED for speaking the truth and “making him look bad”. That skunk also mocks and belittles reporters he disagrees with.

Now his obamanites are bitching and moaning about President Trump refusing to give a story to troublemakers who only print garbage?

This latest ridiculousness from obama’s administration is bitterly biased and hypocritical critique that means absolutely nothing.

barak hussain obama’s ‘legacy’ with be that he was a miserable racist and a shallow human being.

Email ThisBlogThis!Share to TwitterShare to FacebookShare to Pinterest
Labels: libtard and demogod ridiculousness, obamanite hypocrisy, truth about how obama treated the press corps

Phantom in the Snow

And it happened in our back yard. I woke up and poured a mug of coffee and went into the back livingroom to watch the birds flocking to the bird feeder. While looking at all the glistening white snow blanketing the back yard, I noticed that something had knocked my metal bird-bath stand over on its side; when I mentioned it to Hubs, he said it was probably the cat that sneaks through the bottom of the fence that borders our back yard and the neighbors. I was thinking probably and more likely one of the squirrels that run the top of the fenceline and jumps into the open bird feeder to filch sunflower seeds. But then I noticed 2 parallel lines of tracks messing up the pristine beauty of the snow blanket covering the back yard: one set of tracks was obviously cat tracks and I know who the perpetrator is; the other set of tracks was a mystery animal that hopped or jumped across the yard from the overturned bird-bath stand to the base of our bedroom window.

So I pulled my boots on, grabbed the camera, and went out to investigate: 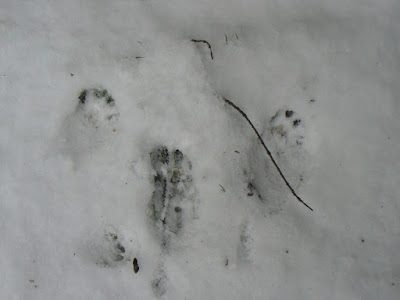 No mystery here ... these are cat tracks along the ground edging the side of the deck. 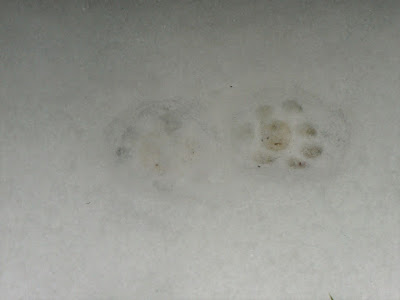 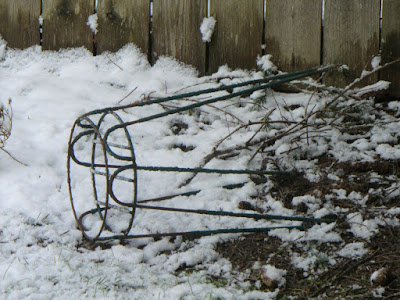 Here is where the mystery tracks begin - something knocked my birdbath stand over: it could have been a cat or a squirrel, BUT the 'mystery tracks' begin here and lead to our bedroom, where they promptly disappear! The tracks simply come out of nowhere and go (((POOF!))) into thin air: where did ‘it’ go, and most importantly … WHAT was/IS it? 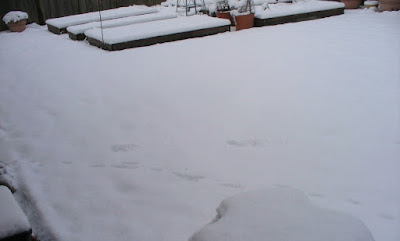 There are 2 lines of tracks - one line is obviously a cat; the other line a mystery animal that hops or jumps very long strides.

At this point I am very curious. What small to medium sized animal could hop or jump in such a long stride? So I go into the garage to get my metal tape measure that I use when laying out my veggie garden … 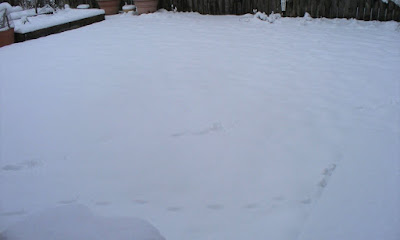 The cat tracks skirt the deck ... the mystery animal hops or jumps are 5 feet apart; that length is how tall I am. I measured the distance between tracks very carefully. And you can see the cat tracks running alongside the deck ... 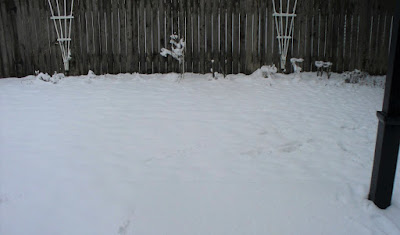 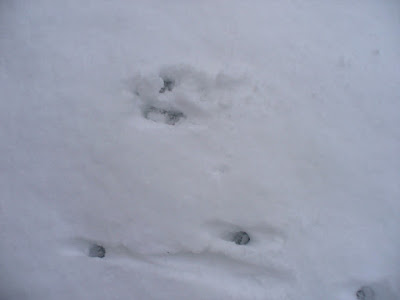 Up-close pic of the parallel tracks: the forefront tracks are cat ... the tracks behind the cat tracks remain a mystery. 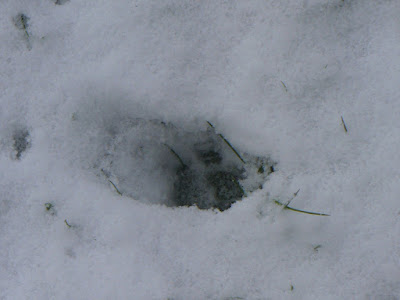 Up-close picture of the forefront tracks are definitely cat tracks. 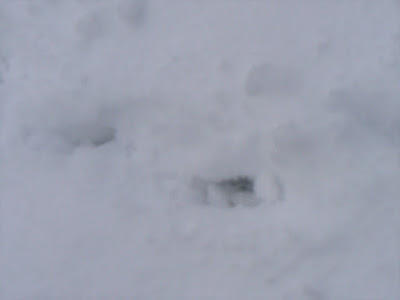 The forefront cat tracks are spread apart in stride as a cat naturally would be. 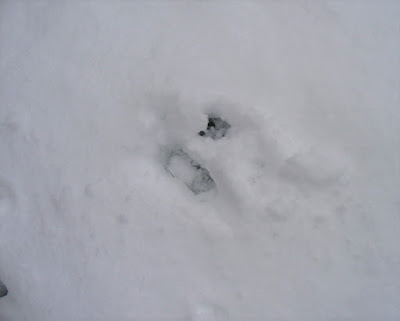 The background parallel mystery tracks are just plain strange and hard to discern. They don't match any animal we can think of that would travel through our back yard such as raccoon (that animal is too large and too fat to hop or jump; it would waddle. LOL), a rabbit would hop or jump, BUT it would not be able to climb or hurdle the fence; and we are familiar with cat tracks … 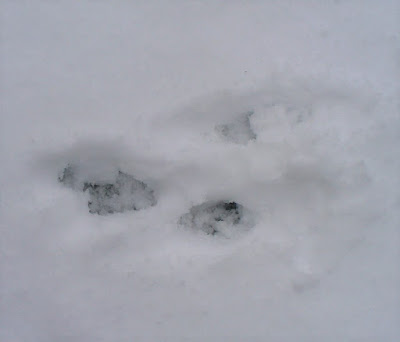 What snow phantom made these mystery tracks that start at the overturned bird-bath and end at our bedroom window? Where did it come from, and WHERE did it go?

It’s weird, folks. It came out of nowhere and simply disappeared into thin air. 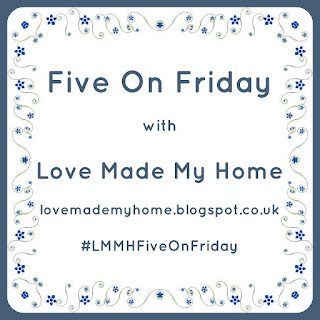