As we were leaving our driveway yesterday morning, ice was mingled in with the rain. It started snowing in earnest about an hour later, around 9:30 a.m., as we were on the road to visit with friends. By the time we reached our destination at 10 p.m., there was several inches on the ground. We visited for about 2 hours and then headed back home because the snowflakes we could see through the window were getting bigger (some the size of a quarter) and we needed to make a stop in town to purchase a printer before making home.

Back in town, which was wet from the rain – but not snowy – we decided to stop at our favorite Thai restaurant and get a bite to eat. While there the snow started in to fall in town and the owner, who we had watched grow up before our eyes when his father owned the place in the mid-1980’s, remarked that “this is the 4th time this year we’ve had snow … isn’t that like some kind of a record?” And we said yes, it is a record. Here in the PNW where we live, we get the rainforest effect which is torrents of pavement pounding rainfall and snowfall is a novelty. Some years we don’t even get a hint of snow – and some years we get overnight snow that melts almost as quickly as it showed up. During really weird winters we get freak snowfall of anywhere from 4” to 18” that may last a whole week, as we experienced earlier this winter:
(http://jeastofeden.blogspot.com/2017/01/snow-day.html); but FOUR SIGNIFICANT snowfalls is certainly a record in these parts.

After eating, we stopped at Office Depot and bought a new printer to replace the one that died … 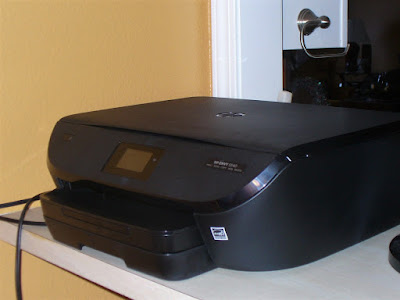 Now we can get our Tax Filing done.

And of course while we were in town, I had to stop at Jo-Anne’s and buy some more yarn “because it’s still on sale and I have some ideas I want to design”. I bought several MORE colorful skeins of Red Heart yarn: 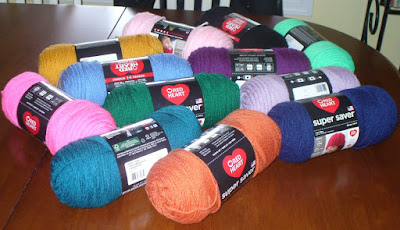 When we got back to the pickup, Hub’s made a remark that “we are yarn poor” … and I thought he was teasing me about being a yarn whore and quipped, “Yes, I am: I can’t help it; when I walk the yarn isles the yarn seduces me and I succumb”. And then we laughed about the misunderstanding. But it IS true that I AM a yarn whore. And I can’t apologize because we both know that the same thing will happen again. And again … and again no matter how much I swear I will control myself ;-)

Finally making it home and hauling our newly purchased possessions inside, we were amazed at how quickly the snow began to accumulate … 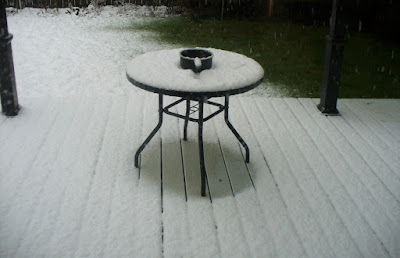 2” snow on the back deck by 2 PM; I had put the saucepan on the table to collect rainwater for my houseplants

Even the squirrel that has commandeered the largest birdhouse Hubs made, poked its head out and chattered, “What the heck?” before quickly darted back inside and staying there nice and cozily warm … Just yesterday it was Spring-like weather (so much so that I even put my greenhouse up near my veggie beds area a day ago and bought potting soil to start cabbages, kale, and lettuces to slip in the beds for an early head start), and then suddenly the fickle weather turned on a dime and dumped snow on us. How rude >:-(

And the snowflakes got larger and fluffier and steadily fell and slowly accumulated: 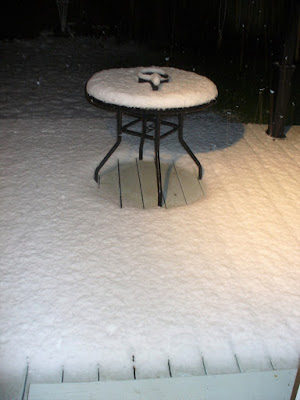 3-1/2 inches of snow by 8 PM. Not a lot of snow like other parts if the USA … but unusual and significant for our part. 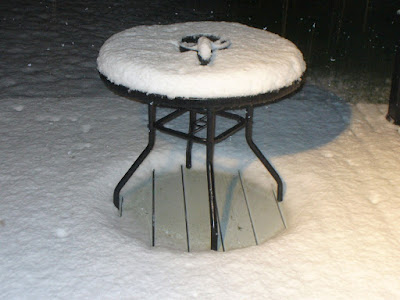 By 10 PM, 4-in. snow had piled up, and was glittering which meant the icy rain had begun and the snow would begin to melt come morning.

And it is melting even as I type. I can see the rain has ice in it, but the snow is melting. The temperature outside is 36-degrees and everything is dripping. The snow probably won’t last the day.

And that’s okay with me! This snowbaby is aging and isn’t as enthralled with snow anymore – I admit that my eyes do still light up when I see it falling, but my old bones groan. Overnight snow works for me at this stage of the game LOL :-D :-D
Posted by Val at 8:58 AM No comments: 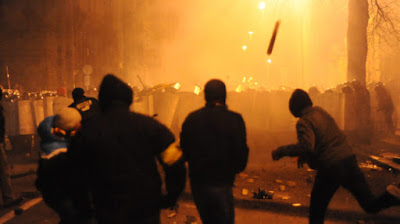 This is not the America I know – this is Amerikka post-obama. The scene shown depicts a 3rd world country in full throttle anarchy … especially muslim countries.

But it most reminds me of what the so-called-palestinian-thugs do to Israelis. THIS is obama’s “legacy”.

These are the types of people libtards and demoncrats wnt to flood America with ... these are the types of people American obamanite governors are suing the government to allow in. This is death-becomes-her steeps's, hollywood hag streisand's, traitor madrona's, media whore assy judd's, stand-by-her-man hellery's, cry baby chuckie's, and dementia poster child nancy plasticface's dream for America: that she goes up in flames.

God give our President, Mr. Trump, the courage to buck the assassination threats leveled against him TO DO what NEEDS TO BE done and end this insanity.

Call the National Guard in. This has gone beyond the pale and needs to be seriously dealt with.
Posted by Val at 8:00 AM No comments: 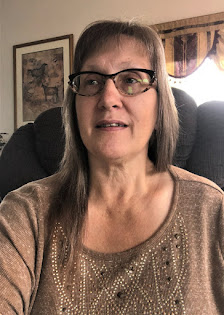