The first week of January I decided to brave the world and get out to meet people and make friends, even if just casual friends (https://jeastofeden.blogspot.com/2019/01/the-prize.html): I am by nature a lobo – a loner; Hubs was my best friend and my entire world aside from 1 or 2 lifelong friends, who also passed years ago, and my children/grandchildren – but he is not here now, and there must be at least a few friends in my life until I eventually and inevitably join him. Our children and grandchildren live hours and several States away; if I get sick or fall and can’t get up, I would be comforted to know that there is at least 1 or possibly 2 friends who will be stopping by or calling me weekly to see if I am okay; a woman – especially a woman in her Senior years – on her own, needs all the help she can get. And I am going to be on my own from here on out. I did hear from Hub’s niece, Tiffany, this morning that she will be checking in and dropping by; I am thankful and appreciative as she does has nursing knowledge and medical skills if needed. You all know how I feel about nursing homes, and THAT is where doctors and hospitals send Seniors when they end up in their offices of hospitals for anything from a lingering flu onset or a prolonged illness: I do not want that. So Tiffany’s offer to help in that regard eases my mind considerably. Elohim will bless her for her considerations. I am not helpless, but life does happen; and always expectantly.

And I decided also to switch things out and rearranged the various rooms in our home. Hub’s son came up from Salem, Oregon to help me transfer the recliner from the TV Room Alcove down the hall to the livingroom; Hubs disconnected the TV service in October 2018 and I stopped watching TV years ago, so the point of that room is pointless now – time to switch things out. The hallway was tight, so we turned the recliner on its side and dragged it into place: 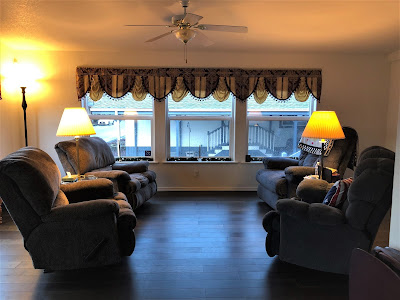 We are not couch/sofa people. And everyone we know prefers recliners also. I have had couches and sofas … even a sectional sofa … but they were always passed by when a recliner was in the room too. So this time around, we just bought recliners; and it suits 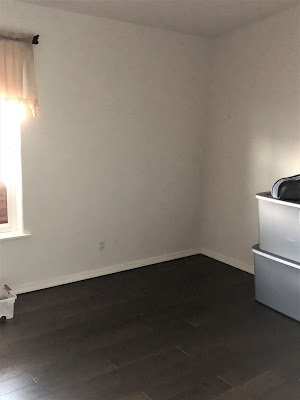 The room that used to be the TV Room Alcove; it is now just another spare room. For the time being, bins are stacked and stored there while I continue switching things out, but eventually this room will be used as another spare bedroom for overnight guests, or a drying room for herbs and certain veggies after harvest. You can take a girl out of the country, but you can’t take country out of the girl ;-)

The sad thing is that we still have stuff in boxes that has yet to be unpacked because 95% of the time we spent in this house since buying it a year ago, was ate up with remodeling it and making it the home we desired inside and outside to fit the life we lived – we had unpacked only what we needed as we worked at creating our living space thinking everything would be in its place and ready for the final unpacking/placement inside this past Winter once the planter boxes and rain barrels were in place outside: we had no idea what lay ahead of us. I have been procrastinating with the unpacking of those boxes and bins since Hubs graduated to a better and higher realm of living: but I really need to get to it, and just get it done.

This morning, as soon as the dawn broke, I went for a walk around the Park – about a mile from our driveway and back – then I pulled the coffee table too from the TV Room Alcove down the hall; and I’ll start my veggie/flower seeds here in the sunny window to be transferred to the planter box beds come Spring gardening season … 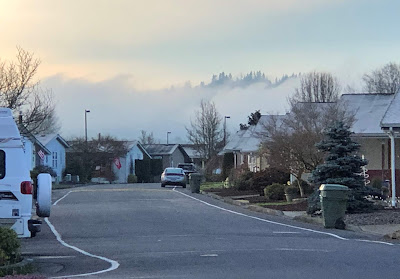 River fog looks really close, but it is actually a mile or so away on the river beyond the back highway. 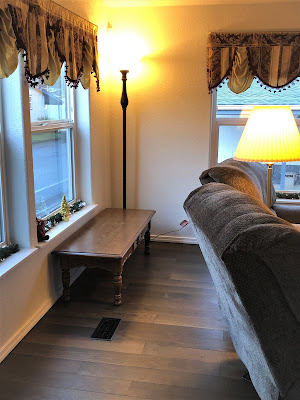 It is drizzling now with faint sunshine at 38-degrees outside, and I am working on crochet lapghans to be donated to the local hospital cancer ward – it’s the least I could do since the hospital paid all of Hub’s medical bills. From where I sit, in my recliner, our home looks very cozy and inviting … 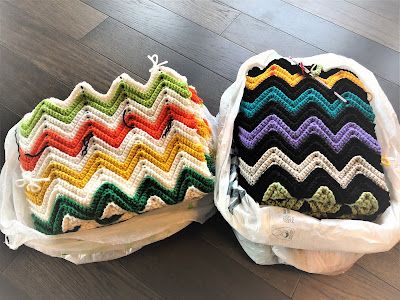 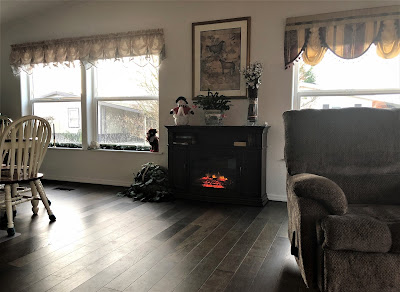 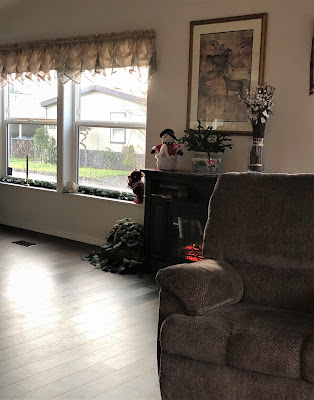 Hubs would have liked this view of the warm & inviting fireplace, from his recliner too. I am sure he is now smiling as he looks down from Heaven and sees the cozy changes: knowing that I will continue with the life we planned as if he were still with me ;-)

And now I have to get busy and get the Christmas stuff pulled and stored; I didn't get much put out this year because I wasn't feeling very festive, but now it really has to be taken down ... even the 12 days of Christmas has come to an official end. LOL