It started out with a plan, but the plans fell flat the closer we got to the goal which was *Layser Cave near Randall (info at bottom of post)*. But I wanted to go in the back way through Cougar, so we stopped at the Ranger Station to see if the road we wanted was open … the woman working the desk said it was not. BUMMER! She said there had been a washout and the forestry service has decided not to fix it – ever. Double bummer :-(

While there we spotted this Sasquatch ‘orphan’ that needed ‘rescued’, so I bought it: we, here in the Pacific Northwest, must do our part in helping to keep this beloved elusive creature safe ;-) 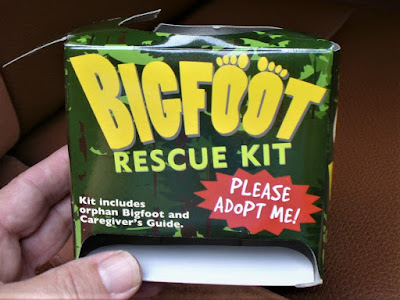 So … our plan spoiled, we decided to try for Ape Cave and Lava Valley: we’d come all that way, so we might as well go home with some recorded memories imprinted in the gray matter data bank, right? 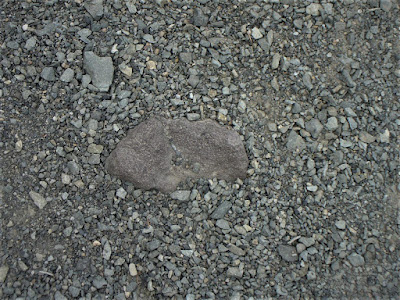 Lava Valley. Cougar, WA: I have a rock fetish, what can I say? LOL. Seriously though, I do like to study rocks, and this white mineraloid rock is interesting with the bright green spots of lichen on it. Lichen takes a long time to grow – mere millimeters or less a year; and they are the oldest living things on earth. Lichens that are 3 inches wide are estimated to be about 600 years old; I estimated this lichen to be the size of a pencil top eraser, so it probably began its life on this particular rock after the Mt. St. Helens eruption in 1980 … making this lichen about 37 years old. 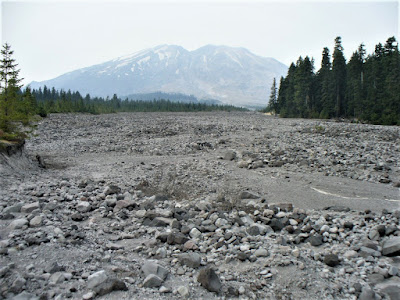 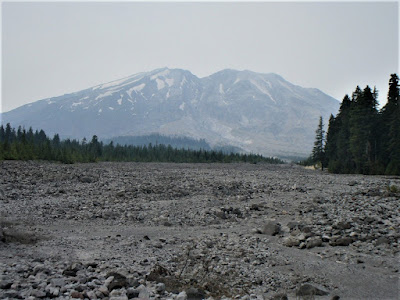 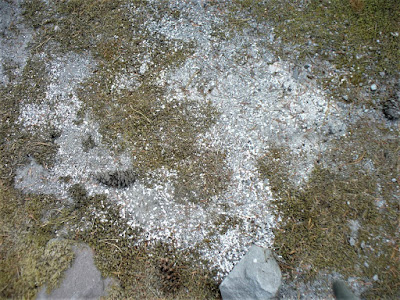 The 4x sufficiently dusted out and our awe-inspired juices flowing, we back-tracked to Ape Cave and milled around with the other visiting gawkers. We happily tramped up the trail and oohed and awed over the volcanic lahar tunnel, but we did not go into the Cave because our old legs simply could not stand the steep stairs necessary for the descent into the murky, musty bowels of the earth – and with baby boy prone to asthma attacks when moldy dust is stirred up, we just stood around the yawning mouth of the underground tunnel cave and watched everyone else ascending and descending. Apparently there is some sort of fungal disease that the Cave bats have been infected with and the visiting humans can carry it out with them; if they do not clean their shoes with the shoe brushes provided, humans can carry the fungus and spread it to infect other bats which will wipe out the entire colony. 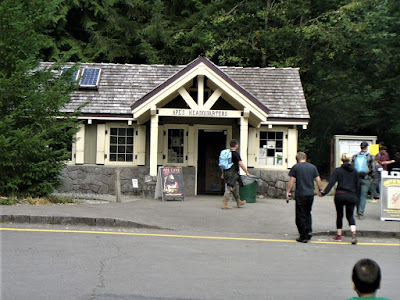 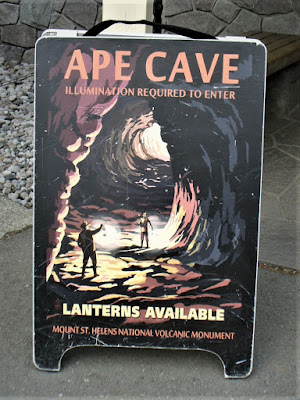 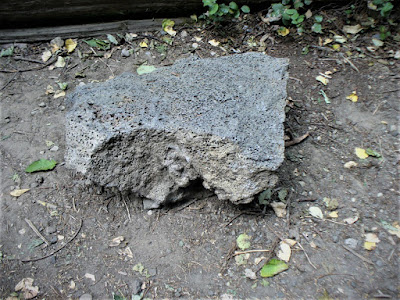 Huge piece of volcanic pumice rock from Mt. St. Helen's eruption. No way of knowing whether it was ancient (200+) or recent (1980). 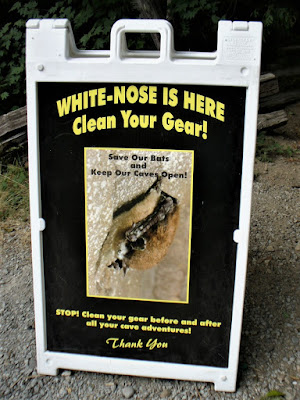 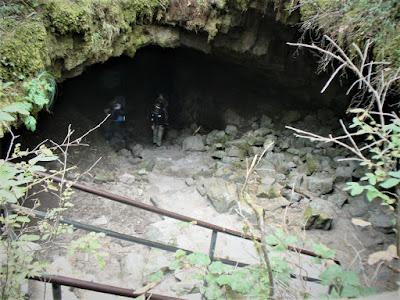 Entrance to Ape Cave. Dark & mysterious ... and not for old duffers. Cougar, WA 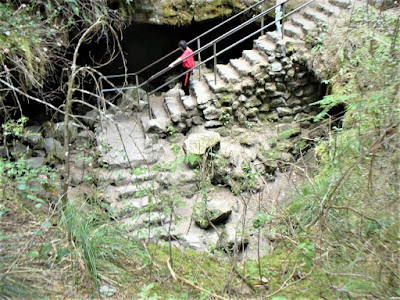 Look at ALL those STEEP stairs.  We passed on exploring the depths pf Ape cave. Cougar, WA 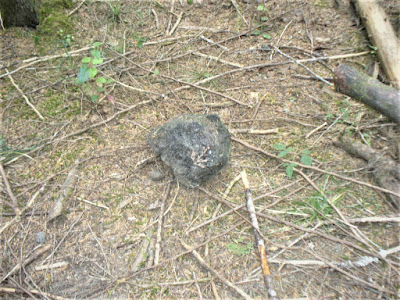 Pumice rock chunks litter the ground around Ape Cave, which is just a GIGANTIC lava tube.

By then, we were getting hungry; so back into Cougar we drove. We immediately saw a restaurant that appealed to us … and ordered food that would have made our elusive hairy Legend proud. I ordered a ‘Bigfoot BBQ Bacon Burger’ made with a ground baby back ribs/brisket patty which was DELISH! (eating like this every night until our home is finished has made me REGAIN the weight I lost PLUS – and I am certain more will be gained before this is all finished), and Hubs had a ‘Crazy Ape Burger’ liberally sprinkled with chunky slices of jalapeno peppers; we are going to be rolling home ... literally. I have already warned Hubs that as soon as we are back home we are exclusively eating Weight Watcher’s recipes; every single WW recipe book I own will be employed and we are not deviating until we lose at least 1/3 of what the scales say we weigh. Restaurant food can be delicious for adventurous eaters, but it is also very fattening. 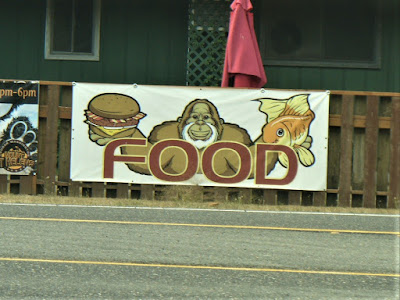 Lone Fir Restaurant in Cougar, WA. Of course we had to stop after spotting Sasquatch advertising the food ;-) 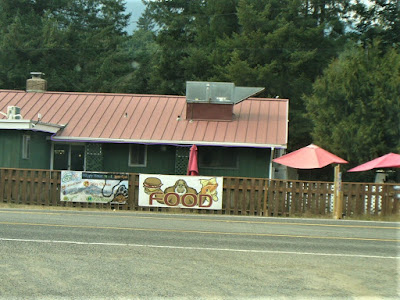 The food here was DELISH – and you get your $$ worth. Definitely worth a return.

Staggering out to the pickup loaded down with the load we put on at the Lone Fir restaurant, we turned the 4x towards home and had a ‘gotcha!’ moment when I spotted what looked like 2 big elk in a field. I excitedly called out: ‘2 elk!’ and asked Hubs to make a u-turn so I could get a better look at them, saying, ‘they’re a lighter color than normal – aren’t they supposed to be a dark brown with a buff colored rump? These 2 are just plain buff ...’ and then we started laughing because when we got a closer look at them, they were spendy cardboard imitations of the real deal; cleverly done … 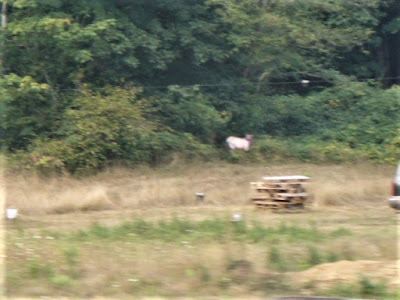 GOTCHA! Fake cardboard elk faked me out. Cougar, WA. We have seen albino elk, but these were not real.

And for once there were no vehicles behind us and Hubs was able to pull over at Eli’s place so I could get a picture of his flashy tepee. Eli is Kerry’s (my BIL) friend & carving buddy; he is also Native American and has a novelty shop on his premises where he sells Native American flutes, artistically carved woodwork, and other tribal doodads. But I like the spacious and colorfully painted tepee ;-) 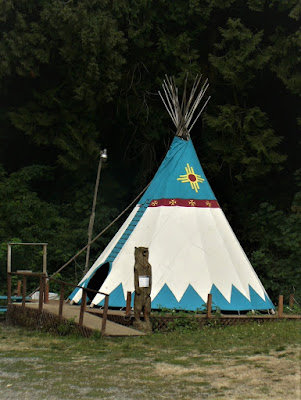 Eli's tepee. 'Eli's Creations' in Ariel - this side of Cougar, WA. Near the Tribal Lodge.

It was a great way to bring a close to the Shabbat menuchah (rest).

*However, once we got back to the Hotel, I did a search online for the Layser Cave and found that the road leading to Layser Cave was OPEN from the RANDALL SIDE and going to Layser Cave by way of Randall would have gotten us there. Maybe next time we have buddy with us we’ll go the Randall route. We first stumbled upon this cave when our granddaughter Alyna, was about 5 years old, and the cave was pure then (17 years ago)… we have been back there many times since, but we understand that it has now been turned into a tourist trap and that vandals have defaced it with graffiti and wood-smoke stains from illegal fires. But I would still like our little prince to see it because it is a cool cave … small compared to other caves, but still pretty cool to experience. It looks claustrophobic glancing at the entrance opening, but when you get inside, it’s a rather open area; and there is comfortable standing space before it slopes at a backward angle. 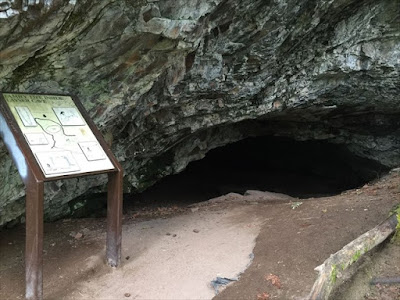 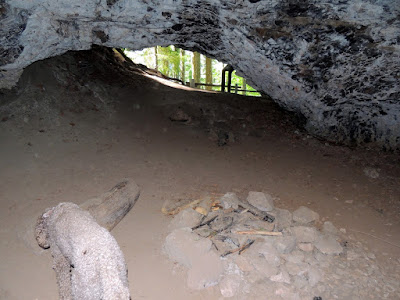 Continue to follow Forest Road 23 for about 7 miles to spur road 083. Turn left on Forest Road 083. The hard to find trailhead is on a sharp turn that goes up and left.