Yesterday while women all over the nation were making plans to dress up in fancy duds and eat at fancy restaurants by candlelight, I was plying my 2 pliers – regular and needle-nose – and tearing 1 hummingbird feeder apart to re-rig it.

I unwound and unknotted the rubber coated wire that had been threaded through the lid by a previous owner when we bought it at an estate sale a few years ago. I always thought it looked dorky, but never had the time to switch it out. Now all I have is time on my hands - so I put that time to use: 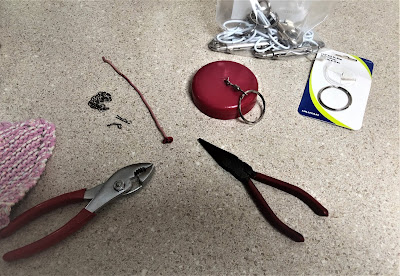 I used my needle-nosed pliers to manipulate and securely attach a small S hook on the underside of the twist-top-lid; the process actually took both pliers as well as a dishcloth because my hands got sweaty. The 2nd pair of pliers to get a firm grasp on the thing while I twisted it securely with the needle-nose pliers, and the dishcloth to keep my fingers from slipping.

It was a little more convoluted than it would have been had Bob or Kerry done it, but I am not Bob or Kerry, and I don't have the strength either … 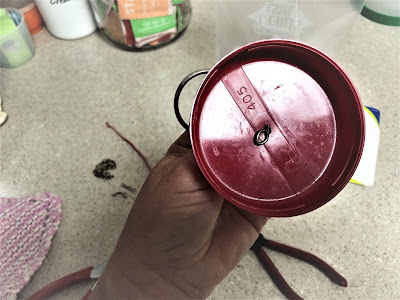 … and I threaded the other end of the S hook through the top of the lid and securely bent it too after adding a little doohickey I found while rummaging around in my husband’s tackle box. I added a huge key ring to that and voila! 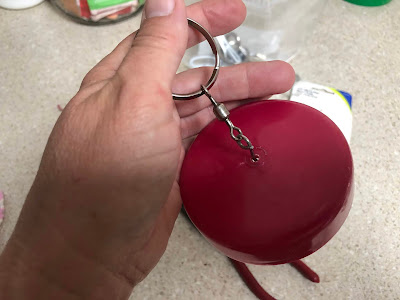 It looks less 'hillbillish' now, and a lot nicer. The other feeder had already been re-rigged on the 3rd, with a simple large key ring.

Ready to dangle from the chains I put together the other day ;-) (https://jeastofeden.blogspot.com/2019/05/love-family-laughter.html)

Bob’s brother, Kerry, came by a little after noon to hang the chains for me along the front deck railing: he barely had to reach his arm up to snap the clip bolts to the deck roof rafters … 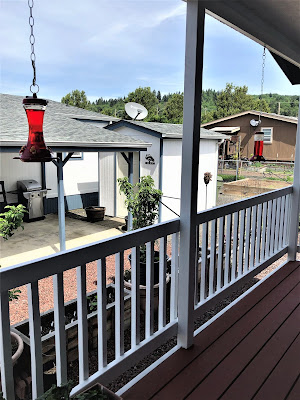 That looks so nice! And now I can hang the feeders without anyone else's help; and without getting up on a ladder :-D

And we sat on the Coho bench he carved 6 years ago and visited for a few minutes while little bobby (Kerry’s 4-month-old red lab pup; and Bob’s namesake) sniffed around and rubbed our legs for a pat and a pet now and then. I joked that little bobby is going to be a big boy – 50 pounds already and still growing! And he has big feet just like all the Hargand males. LOL

Later on, I finished up my day with a Thai dinner of fried won-tons, crab-fried rice, and combo chow mien. Bob and I would have eaten at the restaurant, but I got take-out to enjoy at home this year: 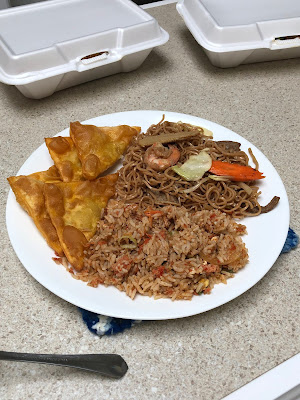 Bob was with me in spirit.

I love you, Babe.

Email ThisBlogThis!Share to TwitterShare to FacebookShare to Pinterest
Labels: learning to do on my own, widow reflections, widowhood
Newer Posts Older Posts Home
Subscribe to: Posts (Atom)