Got some very welcome news in the mail Wednesday afternoon … the Social Security Administration Office has decided to give my husband’s December benefits after all. ((((THANK YOU ELOHIM!)))) This is a direct answer to my morning prayers; Elohim has heard and He has answered: 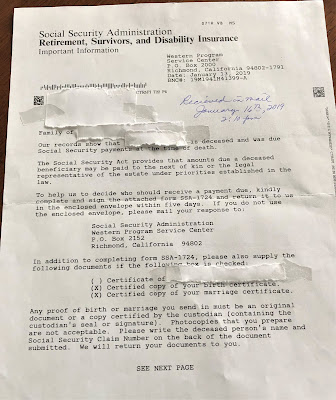 Of course the withheld benefits being returned to me won’t come until sometime around March – but at least is will be coming :-D

Wednesday afternoon I called the Tumwater Office to find out how to get the documents the government wants (do they have nothing better to do with their time????), and was told that they can get a certified copy of our Marriage License to me overnight for $50 (!!!!), or I can drive up to Tumwater and pick it up in the office there for a $20 fee … on top of topping off the tank of gas to make the trip; another $20. My Birth Certificate I would need to request from Illinois for another $50 certification/mailing fee; I was born in the Naval Hospital there, and WA State doesn’t handle out-of-State documents: well, shoot, had I known I would be living in the PNW at the time of need, I would have demanded it as soon as the attending doctor spanked my tiny little fanny 62 years ago ‘just in case’. Then I calmed myself down and remembered that when we got our enhanced drivers licenses 2 years ago so we could cross the Canadian Border without hassle, my Birth Certificate had been accepted for that – so I went and dug it out, and sure enough it was a certified copy ;-)

But would it be acceptable to the government harridan at the local office here? I put it in my purse anyway and braced myself for tomorrow’s battle.

Thursday I was at the local Social Security Office downtown bright and early … praying the entire time that Elohim would grace me to bypass the troublesome woman I usually have to deal with and give me someone who would actually be helpful, and perhaps a little kind. He did; the woman who assisted me was polite and kind, and very helpful: my Birth Certificate was acceptable, but I still had to get a certified copy of our Marriage License: my husband’s son said he would drive up from Salem, OR to make the drive to Tumwater with me – he knows I hate freeway driving and it is a long freeway drive from here to there. He also wanted to look at the ceiling crack in the TV room, and see what can be done with that.

Leaving the local office, I decided that before going home, I would check out the Courthouse and see if I can’t get a certified copy of our Marriage License there – I really did not want to drive to Tumwater because I wasn’t sure I would have enough time to get back home before the Grief Support Meet started later that evening. So I went to the Cowlitz County Courthouse and was told I would have to go to the Kelso Courthouse. When I got to the Kelso Courthouse, I was told that I had to go to the Wahkiakum County Courthouse because that was the county where we got married: a total waste of gas, and a LOT of governmental BS if you ask me … but no one was asking. So. I drove back home and decided to call ahead before hitting the road again because last time we were in Cathlamet on August 3rd, 2018, the hillside at Stella had come down and blocked the road, narrowing the roadway to a 1-way-only passage … 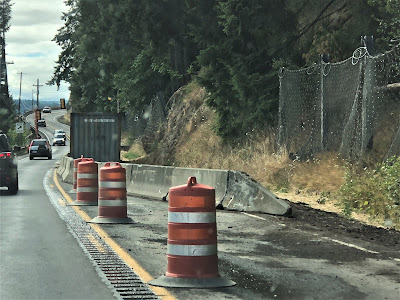 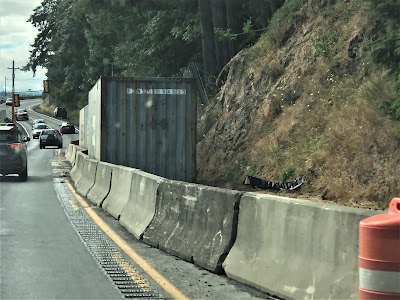 … and I wanted to make sure that it had not been further compromised between then and now. It was open to traffic both ways, so the trip to Tumwater was scraped, but Alex came up anyway and we drove to Cathlamet together; Cathlamet was home for my husband for many years, and that is where we started our marriage and family. The road had been repaired to its full passage and it was a pleasant drive – I always liked that drive along the river. And I always liked living in Cathlamet too; I lived 20 years there – 17 years of those 20 living with my husband and daughter – with Alex staying with us weekends and summers before we sold and left in 1994. 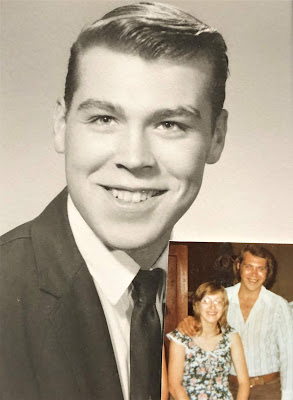 I got the certified copy of our Marriage License at the Wahkiakum Courthouse for $6. And gave a shout out to Elohim ;-) And I was able to get back here and downtown to get everything copied, filled out, and sent off to the inquiring administration before the local office closed at 4 p.m. Another long day with a lot of running around, but at least it is d.o.n.e. and the budget, though still tight, won’t be a hair-pulling-stress. Once the $$$$ actually starts coming in. While in town, I ran into Roger who worked with my husband – they were friends – and informed him of my husband’s passing. He was shocked as expected because when we had all visited with each other the first part of August, before the insanity at the Park caught fire and did irreparable damage to our lives, my husband was the picture of health for seniors our age: his death is as surprising to others as it was an unwelcome surprise to us. Roger asked how I was doing, and I said I was doing as well as can be expected: 44 years is a long time to be with someone, yet too short a time to say goodbye to someone you love.

Alex checked the ceilings and said that while the major cracking in the TV room is unsightly (http://jeastofeden.blogspot.com/2019/01/when-it-rains-here-it-pours.html), it is fixable; and he can do that for me. But we did find a few more cracks:

These cracks had to have happened when I was doing death-watch at OHSU in December 2018 because they weren’t present before then.

Again, he said that they are nothing too significant or worrisome – even along the main center beam – and he can fix them for me. His father would be happy to know that he is being so helpful. And I found some paint cans in the shed too, in all the shades the house was painted with, and it feels like there is enough in each can for the touch-ups required as soon as time and weather allows: the ceiling work first, then the porch steps. Another concern laid to rest; and more praises going up to Elohim :-D

Jehovah-Jira. My Provider Who provides for ALL my needs. I will, as always, be depending on His provision for all my needs. Now more than ever before … and I can trust that He will never let me down. I am a daughter of the Most High God, highly favored, and His grace is sufficient for me.
Posted by Val at 11:50 AM No comments: