This morning Merry came by to help me reopen Bob’s Cremains Box and retrieve 2 teaspoons of cremains to put in my little Urn; so now when I kiss it goodnight, his essence is actually IN it, and I am comforted. I was very upset 2 days ago when when I opened my little Urn and saw that there was no ash in it: (https://jeastofeden.blogspot.com/2019/02/i-dont-know-how-much-more-i-can-stand.html).

Then Alex came up from Salem around noon today to fix the leaking master bathroom toilet – it started acting up since January and BIL Kerry did come and then (http://jeastofeden.blogspot.com/2019/01/it-comes-in-threes.html): but that was only half the issue, because of course, nothing in this house ever makes itself completely known all at once - it kind of drags things out and keeps the frustration boiling; the master toilet has been kicking on and off throughout the day and night, leaking water and being a noisy nuisance; so Alex came up to help alleviate this half of the ongoing master toilet issue. But the darn thing dominate the entire day and again the problem was not able to be fixed completely; we drove into town to get the pieces needed to fix the problem and spent 4 hours after we got back home trying to locate the water shut off valve, which we never did find. We searched all the exterior under-house access panels to no avail: there are 3 of them … one under the front porch – I pulled all wintered-over-geraniums out so he could crawl in there and take a good look: 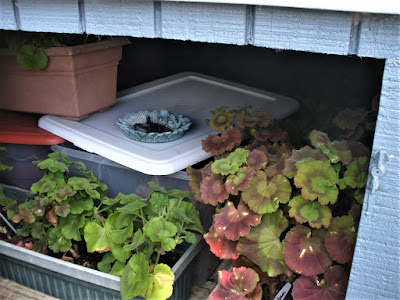 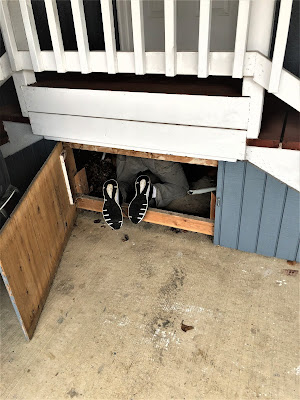 Alex crawled into them all with his Spotlight flashlight and could not see the water shut off valve anywhere, so we are assuming it is somewhere in the middle under the house which would be a pretty stupid place to have it because they are supposed to be fairly close for easy access in case of a burst waterline situation. But for whatever reason, this one is hiding. Back inside the house, Alex did fix the noisy leaking issue, but the shut off application knob on the waterline that comes up through the floor and feeds into the toilet tank has a 20+ plastic knob on it, and it is stripped and starting to leak water – not good for the floor or the baseboard. Very frustrating because we can't stop the leaking onto the floor until someone can crawl under the house to locate that stupid water shut off valve. So I am going to have to call a plumber and get one out here to crawl under the house and find the shut off valve it so we can shut the water off to fix the leaking. Not looking forward to that expense :-(

I am way past ready for things to start settling down around here.

After Alex packed up his tools and left, I ate dinner and finished up the double crochet ripple afghan I started Thursday afternoon. I had some skeins of Bernat Dippity Dot yarn, so I decided to use that to make a fun, colorful little afghan for the hospital donation foundation. It turned out real nice. I will post the pattern later on, after I type it up: 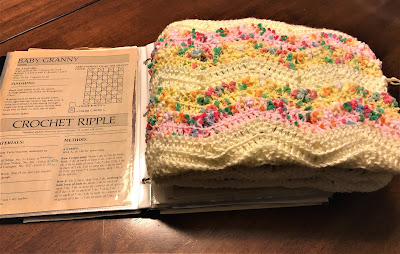 And around 8 p.m. this evening, I started work on a stretchy rib baby hospital hat also destined for the local hospital donation foundation when it is finished. It has been a while since I knitted in the round but I think it will turn out pretty well. I should have it done tomorrow … 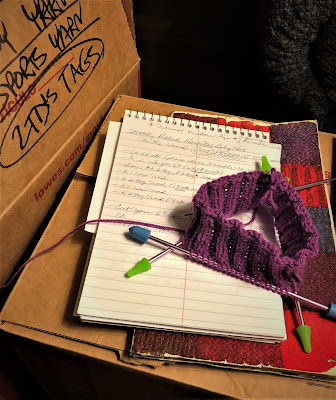