The obama’s are building A WALL 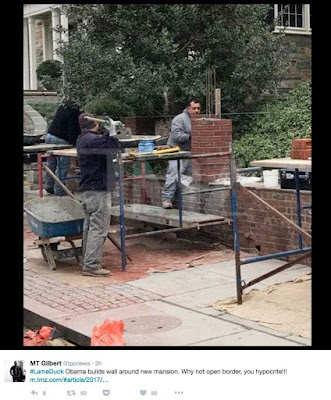 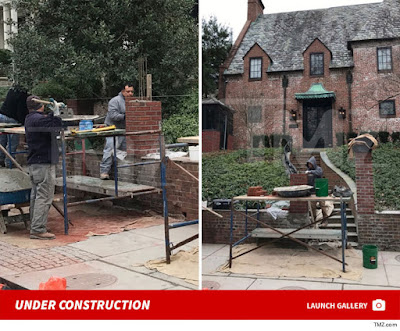 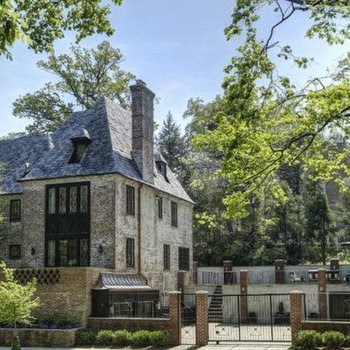 According to TMA … the “we don’t need or want a wall in America” obamas ARE BUILDING A WALL AROUND are their Washington, D.C. castle to KEEP UNWANTED ‘guests’ (dare I say: illegals, undocumented, terrorist muslims, ect; basically the VERY people barak hussain and michael obama say we should throw the welcome mat out for) off their property for when they leave office. Add to that hypocrisy that the new digs came at a cost of $7 Million ... so much for the 'equality between the elite and the little man' that the elite-minded-muslim snake screamed for 8 years - and took wealthy people to task on.

The obamas have got to be the most arrogant and brainless dweebs ever. I wish they’d drop off the face of the earth and spare American any more of their double-standard antics. barak hussain obama and his brainless minions have constantly and consistently over the past looooooooooooooooong 8 years of their political tyranny berated, mocked, chastised, and harassed Americans who say we need a wall along the border to keep our country safe; the obama’s and their pc lapdogs say a wall is racist and goes against what America stands for.

Yet, these 2 queens build a wall around their castle to protect what they deny to Americans – safety of property, home, family, and business. Quite possibly he’s beginning to realize the serious consequence of his THOUSANDS+ muslims he ignorantly and arrogantly imported into America AGAINST THE PEOPLES’S WILL and it is finally penetrating the marijuana haze that wreaths his brainless head.

Hypocrisy at its height from from a questionable couple who praise themselves and award themselves with nobel prizes and metals for absolutely nothing except skin color and unsurpassed arrogance.

Email ThisBlogThis!Share to TwitterShare to FacebookShare to Pinterest
Labels: hypocrite, lying obamas, muslim snake, obama is building a wall around his DC castle

It is refreshing - after 8 looooooooong years of miserable murderous insanity reigning unchecked and being applauded under the obama years -  to see a patriotic and moral man take decisive and unapologetic action to stand firm for American values and American idealism. Our police and law enforcement officials are to be thanked for doing a job that is almost impossible to do in the midst of tranny obamas’ evil and perverted antiAmerican pressure that gave a green light to the fringe element of society to terrorize, maim, and outright murder police and law officials … the VERY BRANCH of civil servants THEY RUN TO when THEY want protection: it’s insanity run amuk … most notably heralded by the black panther party and the black lives matter organization; that both the obama’s openly support and applaud.

THANK GOD that things are going to change in DC and in America in a few short days!

http://dailycaller.com/2017/01/06/rep-hunter-removes-painting-depicting-cops-as-pigs-from-capitol-wall/
Posted by Val at 5:10 PM No comments: 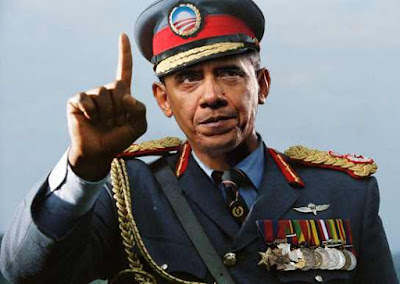 barak hussain obama will go down in history as the most self-serving and delusional moron alive. Narcissistic to the bone. That he had to "award himself" clarifies that he is a total failure and that the only one that believes in his [public service] is himself. From start to finish barak hussain obama’s political coup has been a complete mimicking of fidel castro’s political coup in 1959.

From coming out of nowhere and whipping desperate and uneducated minorities into a racial fervor that garnered him an 8 year tyrannical tranny polical coup and MORE racial division EVER experienced in America since the founding of America, and setting himself up as a tyrannical king to passing into effect “laws” that bypassed American’s Congressional safeguards that would render his destructive and divisional “laws” Unlawful and UNConstitional, to seriously and dangerously eroding America’s social, spiritual, financial, and moral foundations, barak hussain obama has done his damnest to make America a 3rd world country – we aren’t even a nation anymore since barak hussain obama handed over our hard won sovereignty to the u.n. No wonder barak hussain obama hailed fidel castro as a great man: they are both insane morons, catered to only by those they make special allowances for. No one else can stand them.

barak hussain obama is a total failure, on very level - no medal can distract from that fact ...

http://www.breitbart.com/big-government/2017/01/04/president-obama-awards-himself-distinguished-public-service-medal/?utm_source=facebook&utm_medium=social
Posted by Val at 4:43 PM No comments: