This morning, I went blueberry picking with Cheryl & Mike – we had been talking about it for a few months; Cheryl called yesterday afternoon, but I was making homemade pizzas, so I couldn’t do it yesterday (https://jeastofeden.blogspot.com/2019/08/homemade-traditional-pepperoni-pizza.html): but this morning was a good time.

They had told me the bushes were huge … and that there were tunnels through them, BUT I WAS UNPREPARED for what I saw when we arrived – the “bushes” were giant TREES: 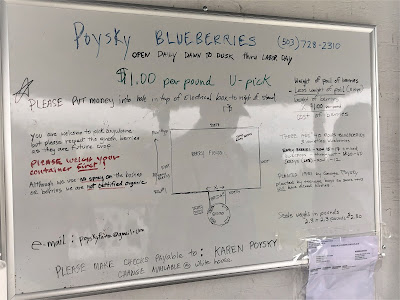 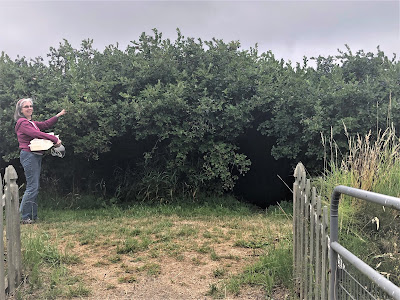 WOW! These bushes are TREES! Cheryl is a fairly tall woman, and you can see how the “bushes” dwarf her …

And those trees were LOADED with berries – I have never seen anything like this! 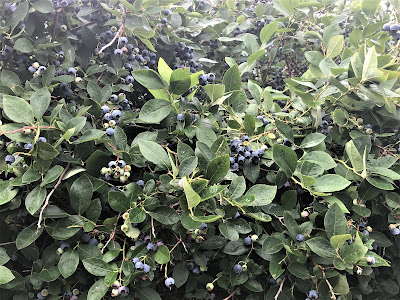 As we walked to the outer limits of the berry patch, where they always go to pick when they come to the Farm; the tunneling burrows were clear to see. The burrowing tunnels are actually the original pathways plotted 50 years ago, that the towering bushes arch over, and intertwine through the patch: 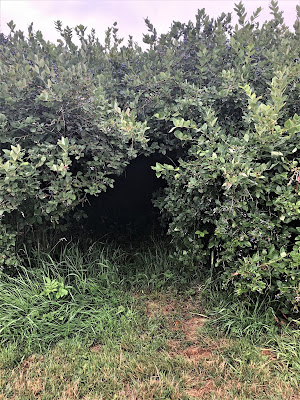 Dark, sun-deprived tunnels stood out among the towering berry trees. The “bushes” had outgrown the bush description decades ago. 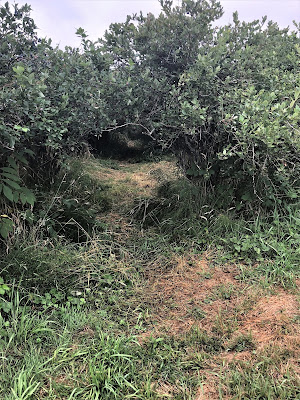 Pathways intertwined among the overgrowth.

Mike joked that because I am so short, it would be easy for me to fit under the arching limbs to pick berries – whereas he and Cheryl are taller than I am, and would feel the squeeze of the spreading limbs while they picked: and it was true. LOL

Even so, at 5’2”, it was a stretch for me to pick overhead berries too far up (that’s how TALL these “bushes” are: they literally towered overhead) – and I was occasionally run out of the burrowing tunnels by territorial wasps: so, I left that area, and moved on down the line. Being stung would lead to certain death, so I didn’t fight them for the berries – there were PLENTY more elsewhere … 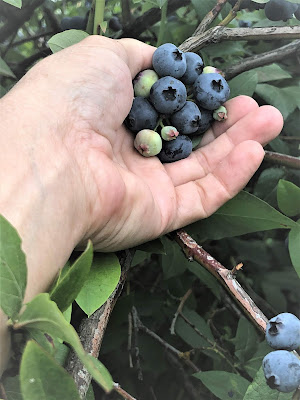 To me, the berry clusters resemble grape clusters, in their fullness of berries. 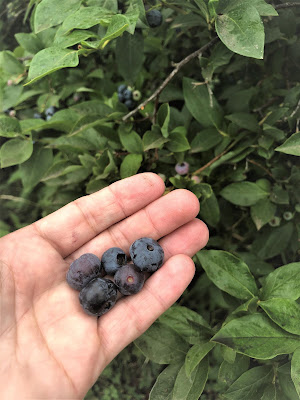 Most of the berries were HUGE. And tasty, too.

I had my container filled quickly – I gathered 9 pounds of berries; so I helped them fill their containers, too: 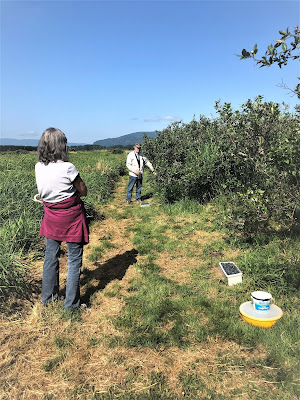 Cheryl & Mike picking along the outer edge of the berry patch.

When we got back to our own State, and they dropped me off at home, I drove to Industrial Way to have my car washed at the curbside car wash I noticed going on at Les Schwab’s Tire Center, when we passed it …. 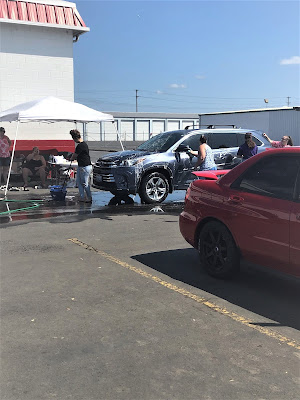 My car was SO filthy with road grime & gravel road dust, that it was ridiculous: now it shines ;-)

Then, I came back home; washed my berries and divided them among 3 large Gallon sized freezer baggies before popping them in the freezer. Those little tidbits of Summer goodness, are gonna be mighty welcome – and tasty – in muffins and cobblers this Winter ;-)

And I am thankful for good and faithful friends; I am blessed to have Cheryl & Mike in my life. Cheryl was my SIL for 12 years before Bob’s brother Ralph went off the rails; and she divorced him – later, marrying Mike. We always loved Cheryl, and felt she got a raw deal from {the family} who rallied around Ralph, who should have been kicked to the curb for what he did to her. Bob came to like Mike; and we often spent time together: we had actually been to their home to visit with them, just weeks before Bob went into ER in August 2018. When Mike & Cheryl found out about that, they immediately came alongside us during those difficult and hard months … and they never left me alone since … even though I had requested to be left alone following his physical death - it was unbearable for me to be around living people - listening to their prattle; and having to host them in some regard: but, they knew I would eventually need them.

And to be honest; Bob's sister, Bonnie, immediately stepped in to help me pull Bob's funeral arrangements together. And his sister, Merry - and his brother Kerry, DID help me in those first months of severe grieving. BUT, I always felt like they were awkward around me. And they NEVER, at any time in 44 years, initiated reaching out: if I didn't contact them ... I did not hear from them. Even now. They never call to see how I am doing, or ask if I need help with anything. They never unconditionally loved me before Bob left for heaven - and they don't unconditionally love me now.

Bob's family never thought of me: they don't think of me now. After August, I will be persona non grata, as far as they are concerned.

Cheryl called every day - and most of those calls was her just letting me know she was there for me: even if all I did during those calls, was cry. Endlessly.

Mike helped in doing ... and helping me to understand ... what needed to be done when "man stuff" {need to know} went right over my head.

I was pretty needy for months.

And they still call - and INCLUDE ME IN THEIR LIFE.

They are STILL sticking.

Not only did he give me friends – He gave me BEST FRIENDS. I am blessed beyond measure.

I pray I am worthy of such friendship; and that I can be/am such a friend to them. 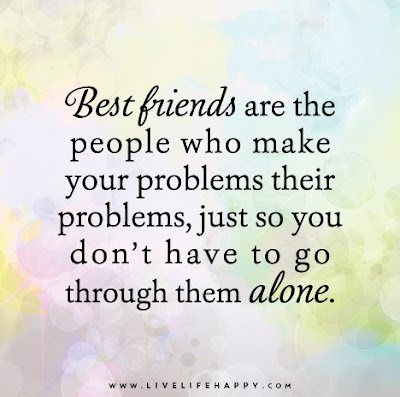 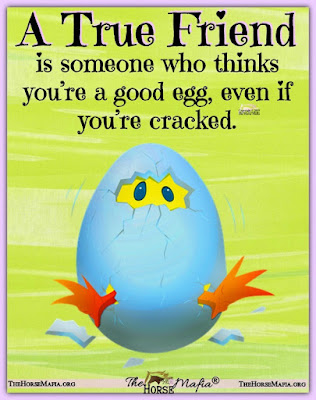