Everly Brothers-All I Have To Do Is Dream (Live) HQ

I, personally do not believe anything a muslim says; their religion FORBIDS FRIENDSHIP WITH Jews and Christians, so anyone who claims to be a peace-loving muslim that embraces Jews and Christians is either a liar ... or practicing their deceptive and destructive religion as they are instructed to do (both lying and being deceptive is considered holy activity with muslims): deceive and then kill with a swift action. There is NOTHING in islam that encourages peace. Nada.
Posted by Val at 4:53 PM No comments: 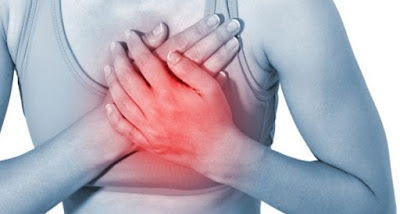 Most of you already know how I feel about doctors – I avoid them unless absolutely necessary. My husband was also of the same mindset – and many of the doctors we were forced to deal with before he left this earth, respected our decision and choices. So, knowing that I have chronic angina and environmental asthma, and knowing that I will not be making monthly check-up appointments to be retold what I already know … this morning I was lying abed and reading on how to live productively when living with angina. Now that I will be living out my life alone, I need to pay more careful attention to taking care of myself because there is no one in my home to be my backup man; that man is in Heaven now. While doing research on angina, I learned that drinking Olive Oil is beneficial. So I tried that this morning: 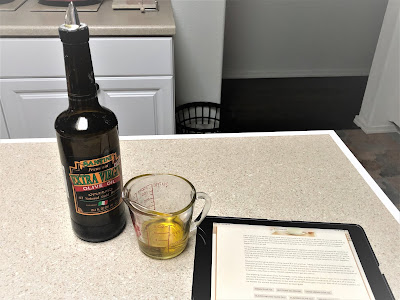 It tasted thick, slick, and a little weird … so I followed up the swallow of oil with a tasty Oatmeal Brownie (https://jeastofeden.blogspot.com/2019/01/oatmeal-brownies.html), and a hot cup of Green Tea ;-)

Angina pain is a discomforting chest pain that feels dull, heavy, tight … feels like a squeezing of the chest; some feel a stabbing pain. Sometimes it spreads to the left arm, across the neck, along the jawline, and sometimes there is back pain. Sometimes there is shortness of breath and or anxiety. Some people will sweat. Some people experience abdominal pain. Sometimes people will vomit. There is dizziness or fainting spells: I have experienced all of these symptoms at one time or another throughout the years – usually after a particularly stressful time, or while doing excessive physical activity: sometimes while sleeping and I was jolted awake; at one time I thought I had had a heart attack. So I have learned to pace myself, to pay attention to my body's signals, and eliminate stressful periods when I can – this can mean cutting people from my life that cause unnecessary stresses; some of those people are family members. When I can’t avoid stressful situations, or get rid of stressful people that make life difficult (like when I have to deal with Candy and Ron, or go to the Social Security Office downtown), I pray for the peace of God to get me through; and tuff out the painful onslaught until it abates. Just making moderate changes in your life and diet can help prevent heart disease, but it won’t be enough to reverse the damage already done.

I have always been short of breath and needed to rest after physical activities … I loved sports, but could never participate fully, so being on a team – track, baseball, basketball; sports I loved and still love – was not an option for me. When I was a young bride and moved into my husband’s house where we lived in Cathlamet, just making it to the top of the 2nd story floor once a week to clean the rooms up there, I would have to sit for a bit on the top of the stairs to catch my breath: 14 steps is a LOT of steps when every breath counts and your chest is being squeezed. Once the demand for extra oxygen to the blood abates, so do the painful symptoms.

The “4 E’s” of angina that need careful attention are eating, emotional stress, exercise, and exposure to cold. Watch what you eat; RESEARCH! Avoid unhealthy fats and eat beneficial foods: eat plenty of fruits, vegetables, and whole grains (my body does not digest a lot of fruit or whole grains well, so I cut back on those and only eat them when my body craves them. And I pay for it later on with internal flare-ups. Skinless chicken, fish, and beans. Non-fat/low fat dairy products; again, my body has trouble digesting these things, so I only eat them sparingly. Avoid high levels of sodium). Avoid emotional stress when possible. Exercise wisely – without excessive physical stress to the body. Bundle up when outside and keep the temperature inside of your home at a heathy level – between 68 and 75 degrees: I feel comfortable at about 70 degrees, but will bump it up when a cold snaps hits. If you have outdoor chores to do, like shoveling the driveway, clearing gutter debris, prepping garden areas … anything that requires excess physical activity needs to be monitored or outsourced, which means wise budgeting that will allow the funds needed for outside help.

Though there is no cure for angina, there are ways to reduce an angina attack and live a long and healthy life. Some of those ways are …

Baby aspirin – reduces the risk of blood clots that will cause a heart attack * Cut caffeine. Decaffeinated drinks/foods hold no danger * Cut down on alcohol * Stop smoking if you smoke * Lose weight if you are overweight – not easy to do during menopausal years; but I have lost 20 pounds since my husband’s death in December because my diet has changed * Exercise regularly – gentle exercises are usually safe; be wise in duration * Stop, rest & relax. Lie down if possible * Call 911 if pain lasts more than 5 minutes * An angina attack can be triggered by stress and exposure to cold – I have had a LOT of stress lately!

Here are 10 of the best foods to eat to free your arteries of build-up:

Asparagus is one of the top best foods to cleanse your arteries – good thing I love asparagus :-D * Avocado – ditto for avocado * Broccoli – I like broccoli, so eating it is no hardship for me ;-) * Fatty fish – I do not like salmon at all! It stinks no matter how it is prepared, and the taste is not at all appealing to me. Vitamins and Fish Oil supplements are also tricky for my digestive system, so eating healthy is not an easy or enjoyable undertaking for me … it is always a tight-rope-walk * Nuts – I like nuts and know that they are a brain power food, but my body does not digest them well, so I avoid them in their whole state and try to break them down to a powdery or pasty state before using them. Even then I only eat them sparingly … or pay for it with stomach pain and colon inflammation for weeks * Olive Oil – use it in and on everything; now I have taken to drinking it! * Watermelon – I like watermelon, but again, it is one of the foods that cause havoc with my digestive system. I eat it sparingly * Turmeric – I use this spice freely; never have enough of it on hand ;-)

This is the research I did this morning before leaving our bed. I generally do not stay in bed long now that my husband has stepped off this planet because our bed can quickly become “the danger zone” if I lay in it too long and allow depressing thoughts to steal into my mind: my husband would not want that to happen to me, and our faith does not make allowances for crippling depression to become a way of life. But I woke up thinking about being alone in this house now with physical limitations such as angina and asthma, so I did a quick research on angina to refresh my memory of what I was told by doctors 30+ years ago so I can make the necessary adjustments to my life and live a fulfilling life in my widowhood years. I could always depend on and rely on my husband to help before … but now he is not here, and I find myself in a period of adjustment on every level of my life. We have done what could be done to stave off an asthma attack when we moved in here – pulled the carpets, laid wood/stone flooring, minimal window coverings, and sparse furniture/nick knacks. I keep the house fairly clean without overtaxing my heart, and have to be careful when stirring up the dust bunnies – when I have the $$$ put aside, I call a housecleaning service to do a thorough in-depth cleaning: it helps them, and it helps me.

And I have a ‘check-up’ schedule in place with the kids and niece once a week. I think, all things considered, I’ll be okay. I have done all I can humanly possible think of, to make sure I am safe and can live a reasonably healthy life here on my own. The rest is up to Elohei and I confidently leave that in His hands - he has given us 1 life with a limited lifespan set specifically for each of us as individuals: as you have heard if you listened to the video above, doctors play God and interfere with that lifespan ... one of the many reasons we have avoided doctors as much as possible: we did not want to interfere with Elohei's plan for our lives, and I will not do so now. When He calls I will be ready to step off this earth too, I am desiring to meet Him face to face and be with my beloved husband again; but in the meantime Elohim expects me to live wisely and I will be taking measures to make the life He graciously grants me profitable and enjoyable.

I posted this video to inform others of what Angina is: not to promote the medical field.
Posted by Val at 12:35 PM No comments:

Had a craving for brownies tonight, so thought I’d whip up a batch of these Oatmeal Brownies ;-) 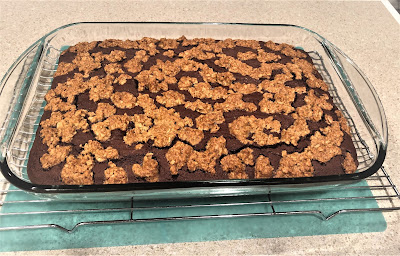 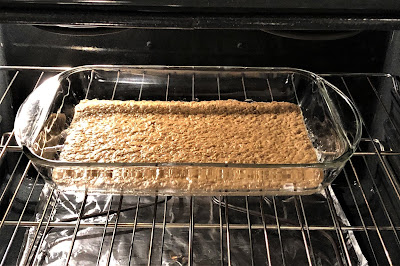 Prepare the Brownie mixture as follows: Heat chocolate and shortening in a 3-quart saucepan over low heat until melted (or use a double-boiler pan); remove from heat. Stir in sugar, eggs, and vanilla. Mix in remaining ingredients. Spread mixture over baked oatmeal mixture in pan: 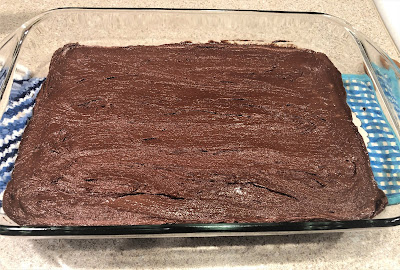 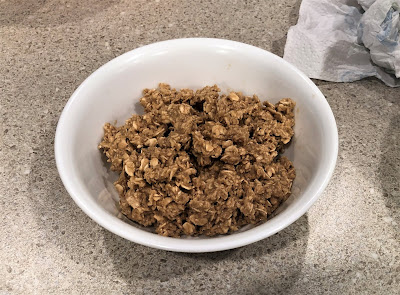 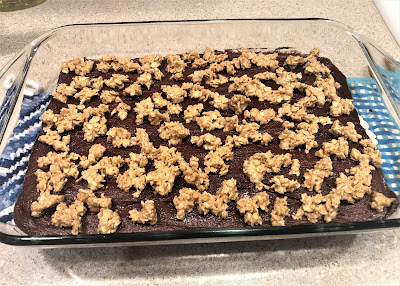 Bake until brownies begin to pull away from sides of pan – about 30 minutes. Do not overbake … I don’t like doughy foods, so I ‘overbaked’ by about 10 extra minutes ;-) Cool; cut into 1-1/2-inch squares.