Apparently, the money was shifted to the correct account last week: so, the bill has been paid. The AT/T rep said that she didn't know why I haven't had any service since Monday 12'noon, but it is straightened out now - thinking it was a software glitch. And, I had to CHANGE MY PASSWORD A.G.A.I.N. I let her know that I am getting tired of doing that too; it's stupid when she is talking to ME, and it has been CONFIRMED THAT I AM ME. I am running out of things to think of to make those morons happy with their stupid "laws" - both at AT/T & Red Canoe. I did get feisty and {saluted} them both before I came back home: Bob always hated me doing that, but ... sometimes you gotta fly the eagle when every other expression fails to get your point across.

Then it was over to UPS; where, again I got feisty.

All I wanted to do was mail 2 pairs of knit & crochet slippers to my granddaughter to keep her toes toasty now that it is Fall ... and UPS wanted to upset the whole thing and charge me $20! According to the girl who waited on me, UPS has new rules which make it {unsafe} to use your own boxes and brown mailing paper to send your packages through UPS. So, she wanted to charge me $7 for the meager weight (homemade knitted or crocheted slippers weight little more than airy fluff) - and on top of that, she told me she could tear off the brown mailing paper with the address on it and ship the shoe box the with the slippers in it WITHOUT WRAPPING with a UPS Mailing Sticker on it. Is she for real??? I told her that was not acceptable - it would look tacky and not stand up under the travel from here to there (I have SEEN how the drivers treat their entrusted packages! They just chuck them into the back of their trucks: it would get destroyed enroute). So, she said, "Well I can transfer your box into one of our boxes ... but that will cost you and extra $10, plus mailing fee." I JUST LOOKED AT HER LIKE SHE WAS AN ALIEN FROM MARS. I said, "Are you telling me that the way my package is wrapped is 'unsafe' ... but if your hands make it 'safe' by simply touching it, lifting it, and moving it into a UPS box, THAT will run $10? THAT is insanity to the nth." And she said, "Well, that's what it will cost. And it will cost about the same at the P.O." So, I shook my head, picked up my package, did the flying eagle thing, and came back home.

At that point, I didn't much care if Bob would have been embarrassed or not with all the finger play happening this morning. I was pissed. 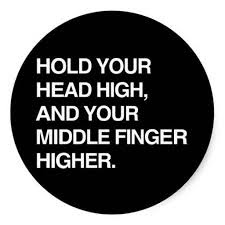 At least I am not cooling my heels in jail for slamming heads together ;-)

But, I sure kept my Guardian Angels on their toes this morning ... 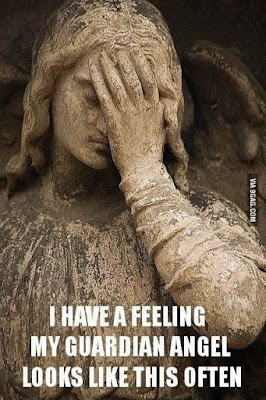 I COULD LEARN TO HATE CLEANING HOUSE ...

Today Bob's dresser drawers and hanging closet organizer was cleared.
His underwear went into the trash can - I had hung onto them, even though my eyes would dart around the room when that top drawer was opened if I needed to retrieve something - like a password the kids were asking for and I thought maybe Bob had secreted it away in that drawer. His private drawer. I kept the underwear and socks because they were the most intimate things that had last touched his body - and I needed to KNOW there was STILL a tangible substance that held a semblance of his essence. They were of no value to anyone but him. And me. But, into the trash can they went this morning. I kept the socks - those I can use ... and though they are several sizes too big for my feet, I will MAKE THEM FIT my feet: and in this way I will feel that in this small way, Bob is still present with me: 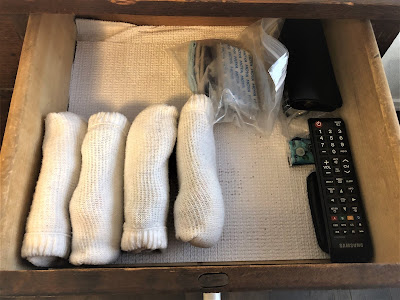 Then I moved 1 drawer down and removed his jeans ... 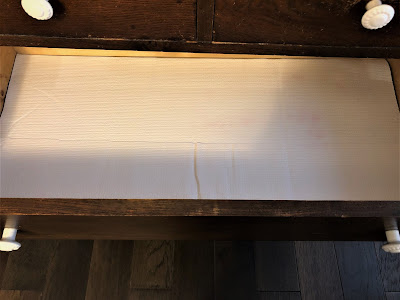 This was the hardest thing for me to do. I don't know why; but it was. Perhaps it was because in my mind's eye I could still see the way he walked ... and I liked watching the way the jeans moved when he walked. Bob was of Finn & Asian background, so he didn't have much of an ass; but what little he had, looked pretty fine to me. And I LIKED watching those jeans flex and move when he moved. But, this morning, I gathered them up in a bunch and put them in the trash. Without a tear. I was afraid to cry - crying might be my undoing: and I had things to do.
Like completely cleaning out the dresser; and what little was still in the closet.
In December, following Bob's graduation, I had cleared the closet immediately of Bob's shirts, jackets, and coats - even the shoes - because I knew if I didn't, I would have died a thousand deaths every time I opened the closet doors that first week of Widowhood. Bob's youngest brother and his son came when I called them, and took everything that was hanging on hangers; or on the floor, out of Bob's side of our closet. BLESS THEM!
But, we forgot about the hanging clothes organizer.
That still needed clearing.
I grabbed the brand-new jeans that hadn't even had a chance to get washed or worn yet before our world was tilted last August and shattered beyond repair September through December 14th, 2018. But they didn't fit any of the guys in the family ... and organizations that have their hands out for everything else, didn’t want them either. They didn't {fit} anywhere anymore. So, into the trash can they went. Brand new. And no longer a needful thing. And Bob's #27 football shirt from his High School days went into the trash can too - it really needed to go; it was literally disintegrating: it was, after all, 55 years old - and had been used hard. Again, I kept the extra socks he kept in the hanging organizer. 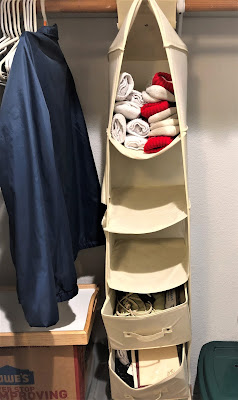 Mitts and gloves I knitted for him were also grabbed and tossed - at this point my mind had been shifted into neutral: I wasn't thinking. I didn't want to think. I was acting on instinct, and I NEEDED to keep moving. In neutral.
I am keeping his Lemmon's Trucking baseball cap. It still SMELLS like him ... I haven't sniffed all of his personal manly odor out of it yet; I have been frugal with my sniffing. I know how weird that sounds, but I am a weirdo. I am not ashamed to claim my weirdness in this my new life - my widowhood. My weirdness is what keeps me sane in my currant upside down life. That baseball hat and the odor associated with it vibrates with Bob's essence. I am keeping it until it, like his football shirt, finally disintegrates.
This morning I cleaned house.
I think I could learn to hate cleaning house ...
Posted by Val at 12:04 AM No comments: