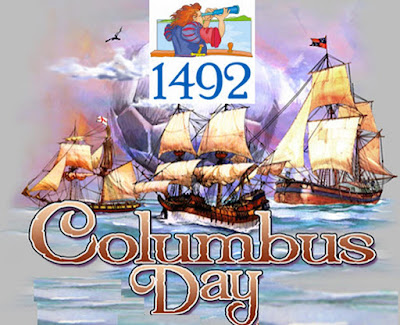 We celebrate Columbus Day in our family. Why? Because it is important and because it is valid.

I understand that this is a problem with pseudo Americans today: TOO BAD!

Native Americans – like any other ethnic group – have had their black spots on History also … but that is no REASON TO TRY TO ERASE HISTORY OR REWRITE IT.

Columbus Day celebrates the SPIRIT OF EXPLORATION: Native Americans should understand that concept.

The entire argument made by rabble-rousing Native American tribes is at best ridiculous, and at worse … H.Y.P.O.C.R.I.T.I.C.AL.

There are so many holes in the argument that they are losing ground before they can find firm footing.

So is the argument that Native Americans are the only people in North America that are allowed to gain land by conquest and war tactics acceptable? RIDICULOUS AND NEANDERTHAL THINKING!

Get over it; get over yourselves: learn to live together people.
Posted by Val at 5:09 PM No comments: