I started this set way back in July, and I finally finished it up :-D

It took a while to finish because I got bored with it, and working on it kinda dragged along until I tied the last knot. I like to complete a project within a week’s time … if it takes longer than that, I get bored and put it off when I move onto something else. That is what happened with this set – I DO LIKE the way it turned out, but the designing of it and the working of it up took more time that I anticipated.

When I started the set, I didn’t know what I would design: I just knew I wanted a fall themed towel set. I wanted to knit it myself because the towels to buy in the stores seem made out of plastic materials that do not wick up moistures at all; they just smear water on surfaces (including hands), without actually doing what a towel is supposed to do. So, I thought I would design my own kitchen towel sets that WILL wick up wetness.

I browsed Pinterest for some Fall themed graphs; and finally found one I liked, and think will work with the variegated cotton yarn I would be using for the background – then I drew it out scaled, on paper I had ‘graphed’: 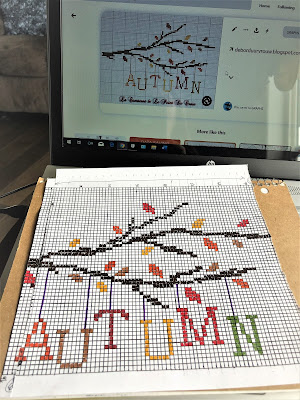 Then, I thumbed through my pattern books ‘til I was happy a detailed hemline pattern I thought would fit with the towel …

I used a size 9 needle & cotton yarn: 1 skien MC, scraps for leaves, and a skien for contrast hemline and crochet topper.

I worked my towel to graph demensions; it is larger than a regular kitchen towel ... and that is what I want.

And it started coming together as I knitted along ;-) 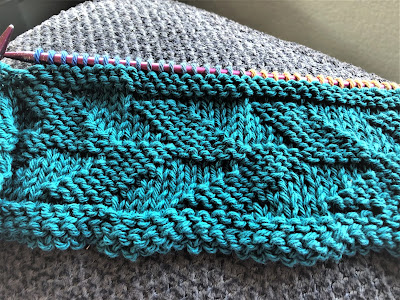 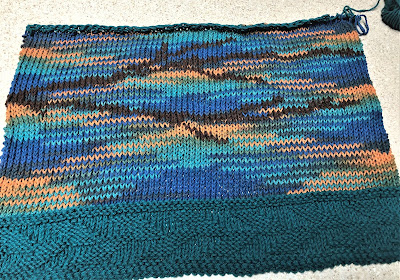 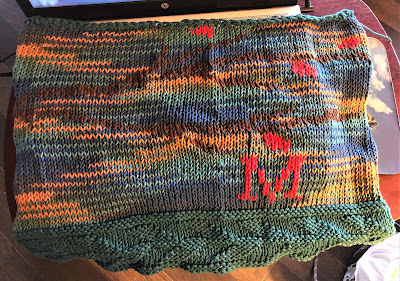 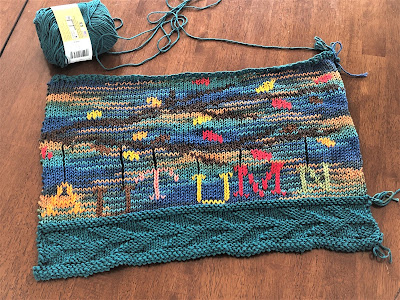 Ready for the crochet topper to be added.

ALL THAT was done a while ago – but I was picky about the button to use: I wanted something “woodsy” to go with the pattern. One day, last week, I was cleaning my crafting area … AND FOUND IT! To be honestly truthful, I had forgotten I even had the button I stumbled across. LOL

But as soon as I saw it, I KNEW it was THE button for my completed towel ;-)

And I made a dishcloth to match: 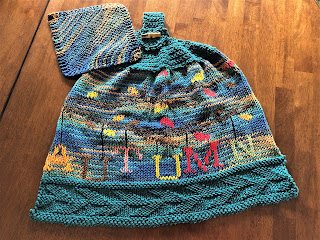 Finished! I am happy with the way it turned out.

On laundry day, when the towels are washed and dried, I will put the summer towels in storage until next summer – and bring the Fall towels sets out for use this year; I made several new kitchen towel sets last fall while Bob was in the hospital (I knitted them up while he slept) – and now I have 2 new ones to add to those this year.

When I worked on last year's patterned towels, I was hoping Bob would be coming home, and I couldn't wait to show them to him: he always liked my designs. But, Bob didn't come back to our home - instead, he was called Home.

One year ago, today, I posted this to my FB Page: Bob, had, at that point in time, been in the local hospital for 5 days.

It showed up in my “FB Memories” reminders today – and tears threatened.

BUT, I KNOW where Bob IS today: and Elohim is STILL on His throne.

And Bob is walking the streets of gold – up yonder, where there is no more pain, no more tears, and he is enjoying a brand-new body & life. I am happy for him. 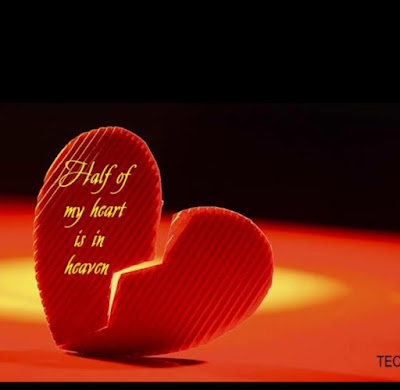 Just had a hair-graying moment!
While talking with Shay around 2 p.m., Bob's doctor called me and said he had been moved to ICU with heart failure and difficulty breathing ... so I rushed to the hospital as legally as possible to make sure I was there with him IF he decided to walk the streets of gold; and his sister Merry called all his siblings and mother - I would have preferred Rose NOT be called because she is 80-something - downside of 80 - and I didn't want to send her into heart attack mode.
The skinny is this: he is critical and being kept in ICU overnight, BUT I talked to the doctor outside Bob's room and she assured me that while she "can not 100% guarantee that he is not dying; he is not dying right now". Relief time. So SIL called everyone back and told them to cancel plane tickets and take their shoes back off.
If he behaves in ICU and his body relaxes, he will be bumped back upstairs tomorrow. MORE days in the hospital. He is in SO MUCH pain and discomfort as 1 by 1 his organs go into shock and searing pain. Doc says the gall bladder still has to eventually go and that the liver, pancreas, and kidneys are "doing much better", but that the heart and lungs are struggling because the water they filled him with to rehydrate him sent THOSE organs into water-logged shock; and his lungs are filling up too (because he has been bed-ridden for 6 days).
HOWEVER, before I prepared to come back home because he was wanting to keep talking to me through the face mask and he isn't supposed to be talking or fidgeting, he asked me what I thought he should do. I said, "Please don't ask me that; I love you Babe. We have already talked about this (years of talking about this) and naturally I want 20 more years with you. But not in constant searing pain if you want to go meet Jesus. Don't worry about us - we'll be fine." And we will be: I KNOW where he is going. And I want him to leave, IF he wants to, with peace of mind and assurance that he won't be leaving any of us in a lurch IF THAT IS his CHOICE.
This has been the hardest day of my entire life.
But I know that Elohei has it ALL under control.
And I know that WHATEVER the outcome will be ... HE is still ON the Throne and Yeshua is on the Mercy Seat.
Help me Yeshua as I walk through the valley of death with my loved one ... comfort us as we face the unknown, and hold us up when confusion and uncertainty threaten to undo us. Amen.
Posted by Val at 9:45 AM No comments: