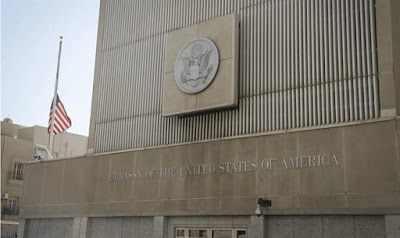 Despite the arab anger and terror threats, this IS a GOOD THING for Israel and for America.

It is the RIGHT THING to do.

And it is long OVERDUE.

The arabs are born angry and they die angry; anger is in their DNA and will not change NO MATTER WHAT happens and no matter who tries to placate them: they are miserable people. And they are already creating terror everywhere their feet tread – trying to placate them is an act of futility, and goes nowhere.

Moving the USA Embassy to Jerusalem IS a GOOD THING for Israel and for America.
Posted by Val at 11:42 PM No comments:


We weren’t home yesterday, so we missed the fireworks in regards to the big news that broke yesterday afternoon: barak hussain obama’s wiretapping of the Trump Towers – which was, and IS, a private residence – during the final weeks of Donald Trump Presidential Campaign in October of 2016 … and there was the welcome news of Trey Gowdy becoming part of the trump Presidency as the White House Intel Committee.

To the 1st big news: I am not at all surprised that that muslim snake barak hussain obummer is employing communist tactics to undermine a presidential campaign to promote his personal pick, hellery clinton – after all, that was ‘the deal’ when she stepped aside during her clear win in 2008 so he could be placed in the White House: it was obvious to anyone who had eyes to see as they watched that campaign. hellery was the clear winner, but she was under party pressure to concede to obama … which she did, understanding that she would be placed as President after his reign of terror had run it’s time limit. So caught up were they in pulling the wool over their deadhead and racist minions’ eyes, undermining The LEGAL People of America, and doing their damnest to erase America’s Christian foundation … that NEITHER WERE PREPARED TO LOSE to Donald Trump. ((((SURPRISE!)))) So when it becomes obvious that he and hellery are losing and The People are going to elect a President from the private sector who is not on the political dole, what does obama do? he employs communists tactics he learned from his weather underground pals, his black liberation muslim pals, his cuban castro pals, and his demoncrat libtard pals to try to destroy the opposition on every level. And now he’s been caught in the web he spun. I AM GLAD … and I hope he gets arrested and ends up sitting in prison for the rest of his miserable life. barak hussain obama has been, is, and always will be a shameful blight on American History.

I don't like obama ... I never have. he has always been a proficient liar, sneaky, and mean-spirited; a typical muslim.

To the 2nd big new: I AM GLAD Trey Gowdy is part of the Trump Team – I LIKE Gowdy and I think he’ll curb the BS going on in DC. That is GOOD “big news” :-D


http://usherald.com/trey-gowdys-new-role-trumps-white-house-obama-pissed-off/
Posted by Val at 2:46 AM No comments: