The daytrip through the Gorge actually took place a week ago today, but I didn’t have time to get the pictures posted until now.

It has been a strange week ending with 2 deaths and a near death: the near death was mine last night when I had an allergy fueled full-fledged-asthma attack around 9 p.m. The other 2 deaths were a 2nd cousin who passed from this life in hospice, and a cutting-of-the-ties spiritual death of a man I knew and loved very much; but is now anathema … dead to me.

Hubs was dealing with the heartbreaking death of his Aunt’s son earlier in the month; and after learning about Charlie’s shocking double life, I was immediately sick to my stomach and needed to get away and clear my head while reeling from the effects of deceptive betrayal – and the Gorge seemed like the perfect place to do that. So off we went … 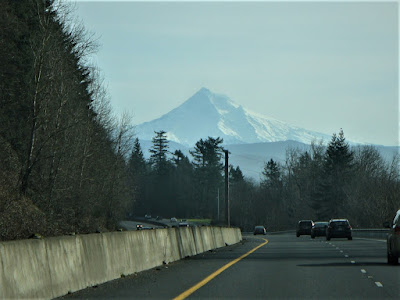 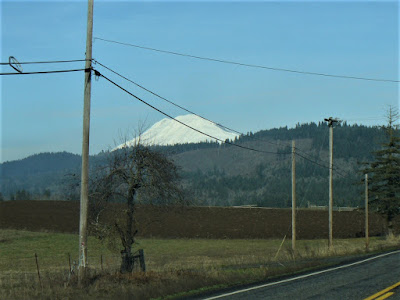 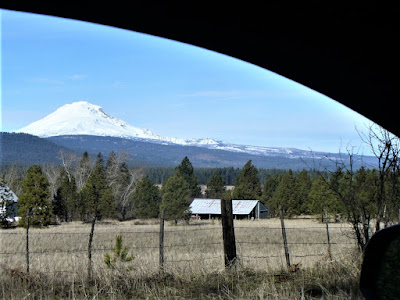 Much better view the closer we get to the Glenwood turnoff. 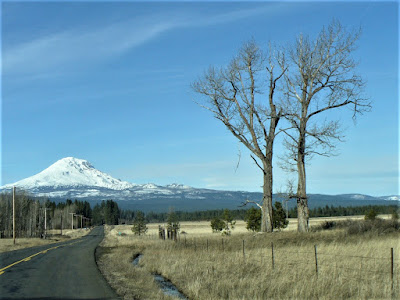 Beautiful. There used to be open access roads for a closer view from Troutdale, and we went that way many times with our granddaughter when she was the same age as our little prince is now, but 7 or 8 years ago a major landslide stopped that. And the State doesn't seem to be too inclined to open that backroad back up. Darn. 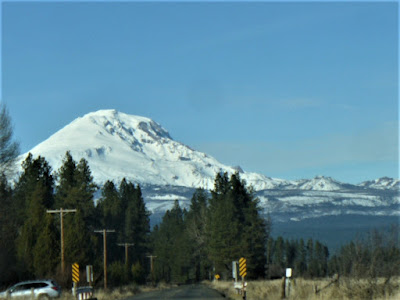 Mount Adams is on Reservation land, so permits are required to visit it.  All access roads are blocked. 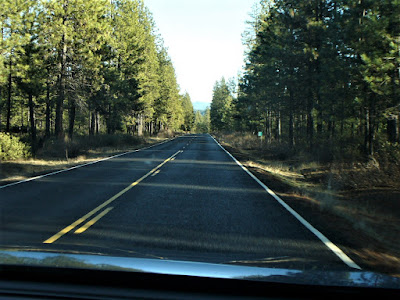 I like the pine trees here in the Gorge - so tall and fluffy with long, thin needles used to make woven watertight Indian Baskets. 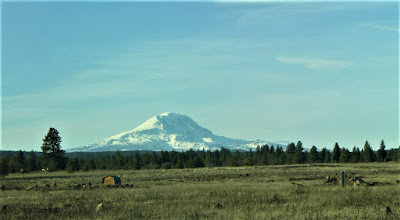 Heading back towards home via Goldendale-Klickitat Junction. We took Klickitat because it's 2 hours quicker and the temperature is starting to dip. Mount Adams is one of 4 major volcanic monuments in our State. 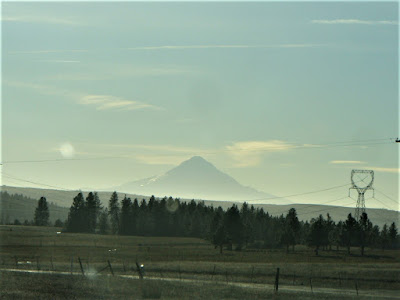 Mount Hood across the gorge over in Oregon. Sun is fading in the Washington Gorge. Steel 'Martian' standing sentinel in the field. LOL

Little John’s ‘celebration of life’ was Saturday afternoon and Hubs went. When Hubs got back home and walked through the door, I started sneezing nonstop and wheezing a little, but it didn’t appear to be alarming because I’d had a runny nose for 2 days so sneezing didn’t seem out of the ordinary, and I’ve wheezed a little every day of my life. Nothing raised a red flag. The evening was pretty much uneventful other that Hubs telling me about the family/friends celebration of life gathering at Rosburg Hall. The alarm happened at bedtime  while kissing Hubs goodnight – a simple kiss was nearly the end of this granny! Hubs must have brought a piggy-backing-allergen home with him from the gathering that set my system into a full blown near-death scenario: and it wasn’t apparent until I got close enough to him for it to affect me. I kissed his head, he hugged me … I went into a coughing fit that left me gasping for breath as my throat swelled and I could feel my body catapulting me into an anaphylaxis situation. The coughing led to serious wheezing. The strenuous wheezing increased and I struggled for breath and fought back panic when I felt my chest beginning to ache while my throat swelled and my heart rate increased. It was bedroom dark so Hubs couldn’t see the desperation in my eyes while I pushed against his embrace and stumbled towards the bathroom where I hoped I could spit the drool (I could not swallow at this point because my throat was closed with the swelling). The whole time I am gasping and wheezing loudly – and grabbing at my throat … and I am stumbling towards the bathroom with spontaneous tears and uncontrollable drool rolling down my face: I am glad the light was off!

I finally made the bathroom and realized I had a following when Hubs switched the light on and dug around for my emergency inhaler. Of course it was useless at this point because I could draw NO air into my lungs until the swelling in my throat went down. It was scary, I won’t play that down. But I learned with the bee sting a few years back where the same thing happened (I had no idea I was allergic to bee stings until I found that I was severely allergic to a bee sting when stung), that if I calm down and erase all thoughts from my mind that eventually my body will respond in kind and the swelling will abate enough to draw a breath - even if only a shallow one. So I closed my eyes so I couldn’t see Hub’s concerned eyes … or my red face with pop-eyes and facial strain marks from the exertion of the coughing and wheezing … and finally I could take 2 shallow puffs from the inhaler. The allergy-induced-steel bands around my chest fell off and my heart stopped pounding so fiercely. But the tears continued – I wasn’t crying, but my body had gone into overdrive in the bedroom; and I spit out some gunk that came up when the swelling in my throat eased. It was blood, and that concerned Hubs who said that maybe he shouldn’t go to sleep after all; to which I said, “go to sleep; it’s over now. The blood is nothing. Really. My throat tore a little when it swelled and I was coughing. I’m fine; go to bed.”

But it was a scary episode.

And one I don’t care to repeat. My throat and chest is very tender today and I ache from my neck to my sternum; and I am still having some breathing issues, but unlike last night, I don’t feel like the grim reaper is standing at my elbow ready to strike, at the moment.

I am thankful for the emergency inhaler on hand, BUT I do NOT want to live at the mercy of an available steroid – I don’t do drugs of any type, and it irritates me that I have an inhaler in my home now. Moving again sounds good to me because I truly do believe that the toxic atmosphere of our current locale has so weakened my lungs that anything “ify” will make them seize up. We’ll have to see in the next few months how that thought plays out. All I know is that until we moved into the city I did not have an asthma attack at any time in the past 20 years. And I did a Bazaar at Rosburg Hall in the Fall and suffered no ill effects at all. That alone tells me that it’s the current locale that is the main culprit behind last night’s episode; and the one in November which had baby boy and me in ER.

And when this body dies I do not want to be as aware of it as I was last night. Just sayin …