My day was going splendidly, UNTIL I opened my FB Page and saw Ravelry political nonsense come on on my news feed: 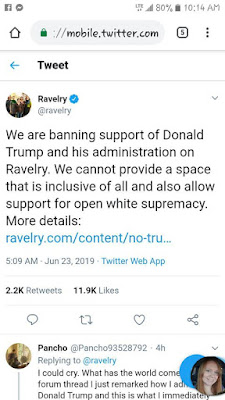 Ravelry is a handcrafting group for Pete's sake; and I have been a member since it started.
But, NO MORE!
I do not hand craft to take a political stand; and when some hand crafters like certain Revelry members decide to use their group as a forum for racial hatred and political divisiveness ... I am outta there >:-P
I also sent a message to the morons on their soap box: {{REMOVE ME FROM RAVELRY. And Ravelry can be assured that I will be banning Ravelry for racism, inclusiveness, intolerance, anarchy, slander, and outright hatred towards a race they abhor based on nothing more than a racist political bias, as well as pandering to a specific political party that is known to be Anti-American on every level.}}
I had no idea Ravelry had a hate towards "white" people.
Don't those moronic snow-blinded lemmings KNOW that 'white' is NOT an actual skin color ... and that attempting to slander/ban someone based on a non-issue is the height of a supremacist mindset?