I woke up this morning thinking I would call Steele’s Chapel funeral home to find out if Hub’s cremation remains were ready to pick up; but while I was downing a 2nd cup of coffee and working up the nerve to reach for the phone, they called me and informed me that the cremains, the Death Certificate, and the kids’ memory remains (to later be slipped into their own personal Urn Vials) were ready for pickup. So I called SIL and asked her to go with me. When we got there, the receptionist bagged up the container and said, “He had big bones … lots of density there.” I thought that was kinda insensitive, but yeah, he did have big bones: Hubs was 6’2” tall and built husky – solid as a rock. He did have big bones, He also had a big heart. 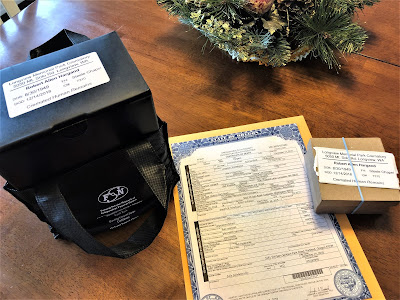 Later I had to go down to the Social Security Office to show the Death Certificate and Marriage License. ((((SURPRISE!)))) Hub’s benefits were cut 25%! I was NOT expecting THAT. The fella doing the subtraction was trying his best to be kind while doing an unkind activity (I actually felt sorry for him). He did what he could to give me every financial break allowed, including a pitiful widow’s portion (aka; “surviving spouse’s beneficiary), which allowed me a pitiable $25.80 addition to a drastically reduced income. And to add injury to insult, I was informed that I won’t receive a stipend from Social Security until the middle of February 2019 because I won’t turn 62 until December 29th, 2018 … and “the office is backed up for the next 42 days” in which my claim will be reviewed and handled. This wonderful bit of bureaucratic news should tickle January’s bill collector’s funny bones :-(

I came home and refigured the family budget and I think I should be able to manage the bills and steer clear of the cat food isle if I am very, very frugal – I AM very, very frugal: every lose penny around our place already screams when I pinch it; now I will have to pinch until they are black and blue ;-) The kids are concerned and are being as helpful as they can be, but I really NEED to work this out on my own. I have to KNOW that I CAN DO this on my own. Hub’s always had confidence in me, so now ((((I)))) have to have confidence in me. I did take pictures of the ‘fridge, the freezer, and the cupboards … and sent them off to the kids and grandkids so they can see for themselves that I am eating healthy and there is not a can of cat food in ANY pictures.

And I have to lean on Elohei a little more: He is ALWAYS available to lend an ear, to listen to my cries, to put up my tears in a bottle, and to support me when I am too weak to stand. He won’t rage at me out of helpless frustration, treat me like I am dense, or make me feel like an imposition. People are human; and humans will behave like humans.

I can’t help the timing of Hub’s death (holiday season); it was and IS “inconvenient” – neither one of us saw August coming down the pike; we certainly did not expect him to die at Christmas time and throw an unwelcome warp into everyone’s lives. Inconvenient things happen at inconvenient times … THAT is what MAKES them inconvenient. I, like everyone else dealing with this death, has BEEN inconvenienced. I do NOT want to be another inconvenience: I don’t know what I will do, but I do KNOW that I WILL DO what needs to be done; and Yeshua will help me figure that out.

Merry Christmas and Happy Birthday ... not.
Posted by Val at 10:54 PM No comments: