Shane’s crew showed up around 7:30 a.m. to get the LED Lights touched-up and back in place; and they look real nice now ;-)

After they left around 8:30 a.m., I decided to go outside and start putting stuff back where it belongs now that the house has been painted (https://jeastofeden.blogspot.com/2019/05/exterior-house-painting-day-3.html), because Mike was supposed to be coming by this weekend to show me how to set up the rain barrels and I don’t want the back yard looking like a garage sale site, or have anyone tripping over anything (https://jeastofeden.blogspot.com/2019/04/under-pressure.html).

The 1st thing I did was to set the rain barrel stands up like Bob had them last Spring and Summer; I used Bob’s level to make sure that the barrels would not be sitting cockeyed.

Bob build these stands pretty solidly to hold up under the water weight, so they were a little heavy to lift, carry, and shift; but I did it because it needed doing and there is only me now to do the doing. They weren’t overly heavy, but they were manageably heavy & bulky… they will not have to be moved again for another 10 years – houses in the Park have to be painted every 10 years:

Placing the Rain Barrel stand behind the shed building. 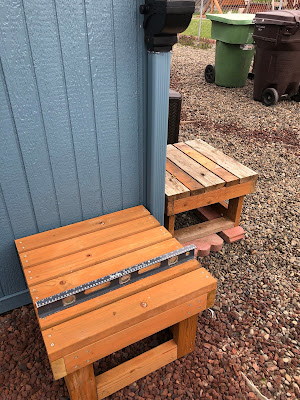 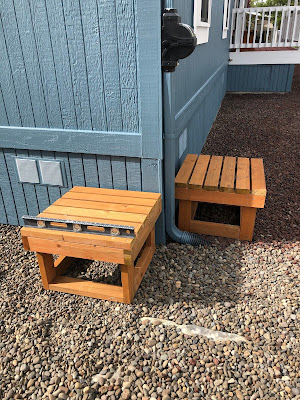 Final 2 put in place opposite end corner of house.

The barrels themselves are very light – almost as light as a box of Styrofoam chips, so it was easy to lift and carry them.

An unexpected discovery made me angry, but nothing can be done about it at this late date, so I will just have to make the best of it the best way I can … 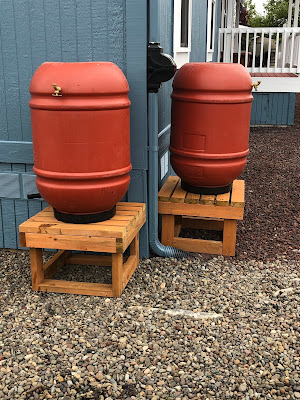 Barrels waiting to be hooked up to rain gutter. They are so lightweight empty that I found myself praying the river winds would not send them into the neighboring yard. They are upturned in case it rains - I don't want the recessed lids to fill with water.
Sliced barrel - NOT happy about this discovery >:-P

After the barrels were set to wait for their weekend placements, I decided to set my potted Geraniums along the porch railing and down the stairs:

Then I got busy with curbside stuff while I waited for Bob’s youngest brother, Kerry, to come get the saws out of the shed so I can keep the carport areas neat and tidy like Candy Scott is brow-beating everyone to comply with: and I flat out refuse to rent a storage building with a hefty monthly rate on top of the jacked-up Space Rent escalations.

By rights, the saws should go to Bob’s son, but Alex is in no position to take them off my hands, so as the saws are my personal property given the fact that I am Bob's legal wife and joint-owner of his private property, I had to make an executive decision and ask Kerry if he’d like to have them: he would, and he and his son Casey, will be putting them to use this weekend; I am glad they are going to a good home and will be used. Bob would like Kerry to have them.

I moved the Variegated Iris’s back in their original position out front of the house, set the Yellow Mini-Rose bush Bob gave me about 18 Mother’s Day’s ago out too – as well as the Teddy Bear Cactus, and Chrysanthemum trio which is showing good healthy new growth …

Kerry showed up around 11 a.m. and loaded the Table saw & Chop Saw into his pickup – and I sent a few other things home with him too that I will never use; there is more that needs to be weeded too, but that will have to wait for another day as this one was already busy enough.

While Kerry was here, he helped me move the patio table back into the carport and set it in place, and he helped me hook up the rain barrels to the rain gutters! I watched and saw that it is easy peasy – so easy that even I can do it on my own from now on ;-)

So I called Mike and told him that he did not have to make a special trip into town this weekend to help me because Kerry had already taken care of that needful request:

Pardon the messy shed interior, but Bob never got around to tidying his space up because we have been busy since buying this place remodeling the interior to suit us … and he spent last Spring & Summer – before he died – building and placing my garden boxes. So, the interior of the shed still looks like it did after the moving truck unloaded his stuff.

The older red chimes are at least 23 years old, and have been restrung numerous times when the river winds have ripped them down and torn them apart. Bob liked hearing them – they are soothing.

I HATE getting up on ladders – especially at my age – but there was no other way to hang them, so up I went and prayed the ladder would hold steady while I teetered on it trying to stretch my short arms into a reach that I really needed Bob’s long arms for.

But they are up now and they sound good … 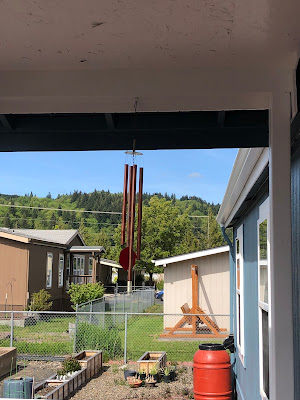 Front porch wind chimes. I HATE ladders ... but Bob is not here now, so I have to use them. And I am freaked out until my feet are back on solid ground. 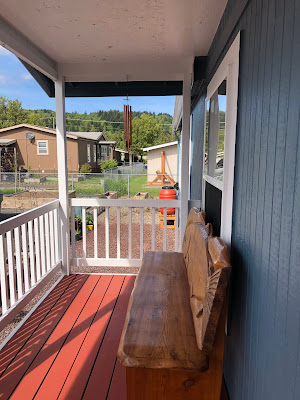 It will be so peaceful to sit out here ...

When I called it a day and sat down for a much-needed coffee break, I noticed that the digital Indoor/Outdoor Thermometer/Humidity monitor was not reading at all – totally blank face. What the heck? I picked it up and fiddled with it for a few minutes trying to figure it out before it a dawned on me that it needed new batteries.

I really wish I would have paid more attention to what Bob was doing with stuff. I could’ve saved myself a lot of frustrations now: 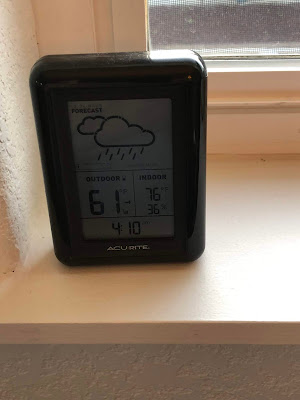 But regardless of frustrating moments, a LOT was accomplished today :-D
Posted by Val at 11:43 PM No comments:

Email ThisBlogThis!Share to TwitterShare to FacebookShare to Pinterest
Labels: learning to do on my own, widowhood, widowhood learning curve
Newer Posts Older Posts Home
Subscribe to: Posts (Atom)