Not for the magazine spread, but underway nonetheless ;-)

Alex came up this weekend to help me transfer documents from my dying laptop to Bob’s laptop – these are things I do not want to lose if my computer absolutely refuses to boot up one of these days. While he was here, I asked him to help me move the Coho bench my BIL carved with his chain saw a few years ago; I paid a pretty penny for it, but it is worth every cent. Moving it into the foyer will make it easier to place back on the porch later on: 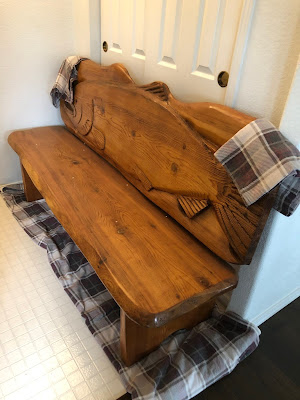 Coho bench brought inside - will be moved back out onto the front porch again when the porch is painted and dried.

And Monday I did seed my transplant pots … https://jeastofeden.blogspot.com/2019/04/whirlwind-daysabbath-break.html

I felt pretty accomplished even if I also felt pretty old nursing my aching back afterwards. LOL 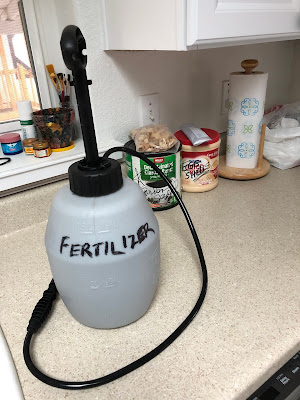 I used this rinsed fertilizer sprayer to water my seedlings with a misting spray so I didn’t dislodge the shallow rooted seeds. No fertilizer used this time, but eventually the starts will be fertilized with a weak fish emulsion. 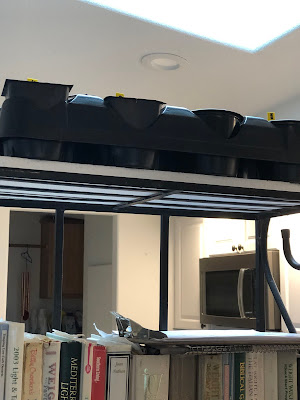 Seedlings set atop the baker's rack under skylight in kitchen. 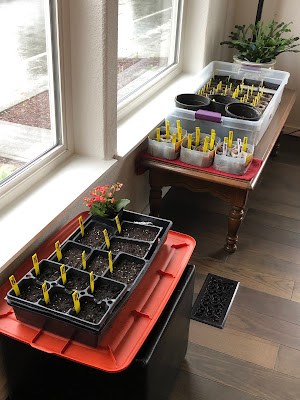 Seedlings set in front of LVRM window.
Watching all that free water falling from heaven and knowing I cannot set up my rain barrels yet to catch it had me groaning with the howling winds blowing in off the river.

Tonight on a FB gardening Page there was a heated argument about Miracle Grow of all things – 2 canadians were hysterically posting “it is a toxic product” claiming, “right on the outside of the bag it says Must Wear Gloves to Handle, or something along those lines” & … which is ridiculous! There are NO SUCH WARNINGS! 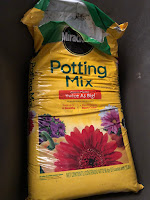 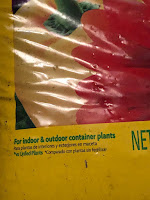 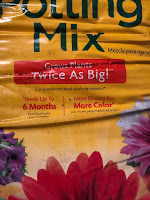 Miracle Grow Potting Soil ...  I took pictures of the bag from every conceivable angle: NO WARNINGS against handling with bare hands. 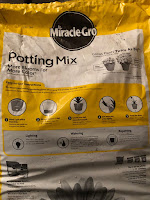 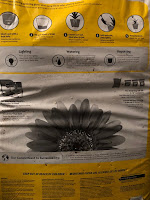 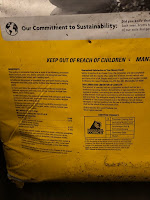 Nothing about needing to wear gloves before handling the soil ... 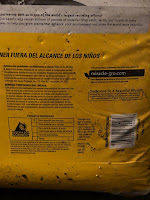 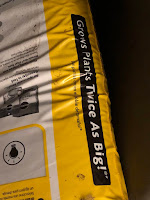 The same with the fertilizer powder ... 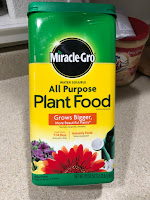 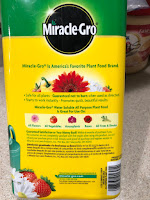 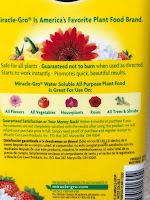 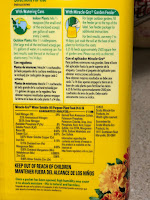 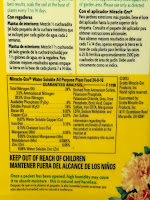 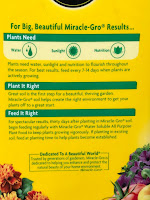 The ONLY warning on either of the products shown above, are warnings against letting a child swallow either the fertilizer or the soil – and THAT warning is basically because deadhead {parents} do not monitor their children without the government needing to needle them to do so.

There are NO scientific studies recorded on the direct long-term or even on adverse reactions related to human consumption of foods treated with/grown with Miracle Grow products. Nada. There are, however, political leaning websites that say, “however, some of the key ingredients in Miracle Grow have serious effects on the environment and possibly on human health.” Hmmm.

“Serious effects on the environment” such as? Arsenic and heavy metals leeching into the soil. Let’s break this line of insane reasoning down: (1) possibilities based on nothing more than eco-freak o.p.i.n.i.o.n.s. are NOT ‘facts’ (2) do eco-freaks not pay attention in science class? Probably not – it is hard to be in class and at the same time scream and shouting in an unimportant lame-brained protest somewhere equally unimportant. FACTS: a normal unexposed human being has arsenic in their hair and nail – arsenic is an organic element. Also, their ‘organic’ diet is rife with inorganic arsenic via red meats, poultry, fish, shellfish, dairy products, grains, and cereals. Fish and shellfish have the highest concentrations of arsenic; maybe these hysterical political lemmings could lower their feared arsenic levels if they ditched their ‘healthful organic’ diets and dined on Miracle Grow instead (3) Cadmium – a potent contender of other heavy metals such as Copper, Lead, Iron, and Zinc are all naturally occurring elemental minerals widely distributed in the earth’s crust. They cannot be escaped and being poisoned by any of them doesn’t happen overnight: they must be ingested in significant amounts over a consistent period of time. ALL FOODS NATURALLY CONTAIN a low level of these elements – even organically grown foods: leafy vegetables, grains, legumes, and kidney meat have the highest levels of cadmium – eating balanced diet reduces the risk of toxicity. Unless one is gardening on a toxic waste dump site, the risks of “being poisoned” by “toxic elements” in the soil is seriously low (4) the ‘NO CHEMICALS!’ purists preach their version of the holy trinity by promoting leaf mold (nitrogen), wood ash (potassium), and TOXIC bone meal (phosphorous) … which pretty much legitimizes the usage of Miracle Grow, which is the SAME CHEMICAL ELEMENTS they preach for AND preach against. A double minded person is unstable in all their ways – avoid them and their propaganda agendas.

Bottom line is this … educate yourself. Anything used to excess is toxic – including false information given out in fake news pogroms with a particular political swagger.

As with everything, common sense should rule: be reasonable with application and you will be fine :-D
Posted by Val at 12:16 AM

Email ThisBlogThis!Share to TwitterShare to FacebookShare to Pinterest
Labels: MIracle Grow and toxicity