Trump and the Coexistence Doctrine

Issues I have with Trump’s world view …

==Trump said, and I quote: “Saudi Arabia is home to the holiest sites in one of the world’s great faiths”

Firstly, whatever saudi arabia is {home} to, it is NOT {holy}. And secondly, islam is NOT a great {faith} – islam is a CHOSEN MANMADE and wholly WORLDLY lifestyle; and a hellish one at that.

There is only one Holy Site, as directed by Almighty God Himself … and that is Israel’s Capitol, Jerusalem. Anyone claiming otherwise is blatant liar severely deceived.

==Trump also said, and I quote: “…after concluding my visit in Riyadh, I will travel to Jerusalem and Bethlehem, and then to the Vatican – visiting many of the holiest places in the three Abrahamic Faiths. If these three faiths can join together in cooperation, then peace in this world is possible …”

And anyone seeking the catholic pope’s opinion on anything loses my respect and support. From what I have been seeing and reading in regards to Trump’s political agenda, I am NOT liking that he is backtracking far too fast in appeasement towards those who deserve no appeasement. Trump, it appears, like so many American {leaders} become very political once they embroil themselves in the DC hoopla; and they become more concerned about their political life, personal advancement, and Historical legacy than they are about the plight of the American Citizens and/or true Christians. In short, they lose sight or realities and start sounding like their wayward predecessors.

There may very well be cooperation between worldly religions such as the religion of orthodox judaism (which is not true Hebrew Faith), islam (which is a worldly relglion based purely on sexual perversion, sexism, war and terrorism), and the catholic religion (which is based on sexual perversion, sexism, crusade wars, paganism and idolatry – NOT CHRISTIAN AT ALL, yet constantly promoted as such). It is IMPOSSIBLE for true Christians to “coexist” with Trump’s worldview of what peace constitutes - to do so, one must abandon God and His Faith as He put it forth to Abraham ... and to Christians through His Son, Yeshua.

In short, Trump has done nothing or said anything to make true Christians rejoice in his decisions. Trump is a world President focused on worldly solutions and applause. Trump is ignorant of what Christianity is despite his “surrounding” himself with heralded Christians: IF they WERE indeed “Christian”, they would NOT be in politics. Politics in anathema to Christian standards and lifestyle.

==Trump further added: “This is a battle between Good and Evil.”

And Trump has immersed himself in the religion of politics and is blind to the dangers of the raging battle.

A double-minded man is unstable in ALL his ways. Trump is a worldly-minded man showing himself to be fully immersed in being a politician. And THAT is never beneficial to Christians – the mindset behind the coexistence doctrine fully embraces humanism and is decidedly AGAINST true Christianity. 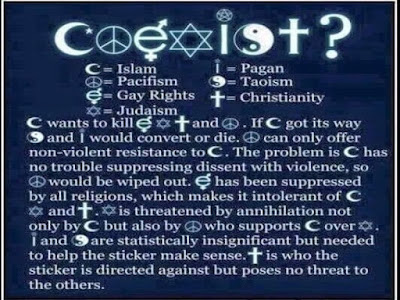 Yeshua is THE ONLY WAY by which man, woman or child CAN BE SAVED.

There is NO alternative way.

And NONE of the three {MAN MADE faiths … orthodox judaism, islam, or catholic ‘religions’} that Trump mentioned above in his speech, recognize Yeshua. All three OPENLY MOCK Yeshua and persecute true Christians.
Posted by Val at 5:07 AM