It’s About the Cross


We heard this song today. It’s the first time either of us have ever heard it; and it was hauntingly beautiful and brought home the realities of what this Season really means.

Yes, I know this is the Christmas Season.

But the trip to Calvary began with the Virgin Birth; the stable in Bethlehem was a stepping stone …

We found a place to fellowship this afternoon. I am picky about where we fellowship. As Christians, we have to be careful about what our ears hear, what our eyes see, what our hands do, what our heart feels, and what our mind is filled with; that’s why I am picky.

We know, that as Christians, we are “not to forsake the gathering together as some are” when they get fed up and pull away from fellowship all together, but we also knew that given the churches in our immediate area, finding true-blue died-in-the-wool-Christians to assemble with was looking like a losing battle: with the enemy of our souls winning at every turn as more and more pastors sold their souls for bigger, packed, 'churches' and preached a different gospel to appeal to the rebellious who did not want to walk the straight and narrow; and endangered their flock while regaling the wolf, thinking to placate and subdue it. FOOLISH hirelings thinking themselves to be wise and witty shepherds! If a snake-charmer plays with a cobra long enough they will eventually get bit – that’s a given.

We have been scouting for a fellowship that had clear gender identities based on the only TWO genders God created … not on the 150+ barak hussain obama and his tranny ‘wife’ michael robinson created during their disastrous 8 year coup where they nearly destroyed America and did all they could to demonize Christianity. We were scouting for a fellowship that taught the pure Gospel … not the whacky-tobacky-anything-goes-entertainment style passed off as  bible-led teaching’ in the majority of {churches} today, devoid of any semblance of true Gospel. We were scouting for a fellowship that honored women and children, yet did not place them above either the elders or the  congregation as a whole … like the NAR and Vineyard infected churches do: women are “helpmates” to their men, not lord over them, and there is a GOOD REASON children are not given leadership positions until they become adults.

I believe we may have finally found such a fellowship ;-)

It’s outside of the city in a country setting (which suits us), where the people are not concerned about political correctness, and stick to the Scriptures as written without twisting it to a personal agenda. And the pastor read from the Book of Revelations! Do you know HOW RARE that is today? Nearly every local pastor avoids it like the plague because (1) they do not understand it, meaning they are spiritually inept (2) they are afraid if it, meaning they are not born again (3) they are mere hirelings and do not want to be labeled as ‘those people’: ALL excuses are lame and show a definite disrespect for The Faith and for the Word of God. Not to mention that they are deliberately starving the flock with no fear at all of Almighty God – Who the flock belongs to.

We liked what we saw and heard today. We liked that the folk were kind, welcoming, gentle, and not afraid of being “those people”. I think we’ll be going back again and again :-D

Hanukkah is almost over – only 3 days left. Hanukkah is about the preservation of the Jewish people celebrating a band of Jewish warriors reclaiming the Temple and Elohei working a miracle to keep eight days of light burning one a 1 day supply of sacred oil the enemy had not found to destroy. Likewise, the birth of Messiah Yeshua (the true Light of the World) generations later, is also a miracle – starting with conception and ending with an atoning death on Calvary. 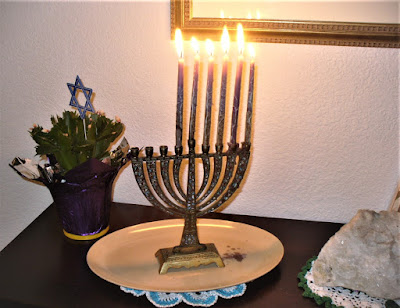 The entire message of Messiah Yeshua’s birth in Bethlehem is all about the cross.

And THAT – the cross – is hardly ever mentioned in churches in America anymore because it if offensive. I am glad the fellowship we found today still preaches the cross … people need to be offended into reality today because the world is going to hell and dragging America with it.