I have had fun designing things around a boy theme this year to honor my little grandson’s presence in our lives ;-) We never – in a million thoughts – dreamed of a grandson … or any more grandchildren after our daughter’s surgery more than a decade ago that removed one of her diseased ovaries and left her with a remaining ‘defunct’ ovary, ‘incapable of pregnancy’ according to the surgeon.

((((SURPRISE))))! 3 years ago Elohei had other plans for our family ;-) Our grandson was born as his sister was graduating high school: she graduated the first of June, and he was born the end of June. Both of our grandchildren are literal blessings from Elohei as our daughter was told at 16 she ’would never have natural children of her own’ – I was with the doctor that day she was told that devastating news. I comforted her as best I humanly could, got busy praying, and started a 100 piece layette for my future grandchild totally believing in and trusting in Elohei’s faithfulness to heal and bless. Our granddaughter was born 3 years later and we felt elation and thankful that Elohei had graced us with a perfect, beautiful granddaughter. We NEVER expected another grandchild – especially 18 years after the first; he surprised everyone, including his mother and father. LOL

Anyone reading my Blog knows by now that our little prince is this ‘gamma’s’ pride and crowning joy though we cannot visit him - or him us, at the moment due to complicating circumstances.

Even so, I am getting pleasure out of designing items for boys this year. I started with a Philippine theme because he is ½ Filipino, and then kinda ricocheted all over the place after the Frog & Philippine flower slippers … so the main theme this year is "BOY THEME" :-D

But with my 1st Bazaar this year starting in 2 weeks & 2 days from now, I need to beef up my Bazaar Cache: I have been crafting every day – all day since the kitchen remodel was finished. What could be more boy mode than our own Pacific Northwest ‘monster’; the ever present and ever elusive Sasquatch? With Sasquatch in mind, a Sasquatch earflap hat began to formulate in my mind’s eye, and I worked it up all day long yesterday finishing it early this morning around 2 a.m.: 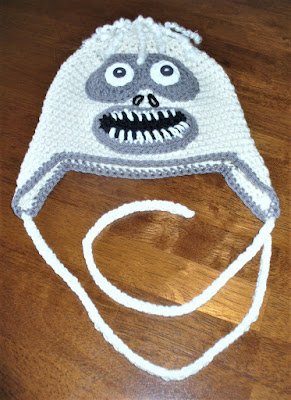 Early yesterday afternoon I went online and took inspiration from these 2 representations on the creature … we, personally, have never seen one, BUT we DID HEAR one while wilderness camping in the Cayuse Pass region (my idea – I thought it would be fun and a good Home Education experience: I had NO IDEA …) with our granddaughter when she was 9 years old (she is 21 now). We had a big beautiful wolf then (1/2 Timber & ½ Gray wolf: she has since passed on and is waiting for us to join her at our Heavenly cabin), and even the wolf was rattled when she heard the weird and eerie howling in the dark dusky dawn. Precious – our wolf – jumped straight up from where she had been lying by our sleeping bag and her hair stood straight up from head to tail while she stood looking in the direction of the unearthly sound. It was really freaky. And unnerving. Hubs and I had been raised in the deep country and we have NEVER heard ANYTHING like that. I went to our granddaughter’s sleeping bag and brought her into our sleeping bag and Precious stood guard over us, keeping a close eye on Alyna. While lying there listening to the weird and strange vocalization and whispering to each other about what kind of creature would make that kind of sound, Hubs and I decided to scrap the wilderness camping experience as soon as dawn broke and finish our camping at our traditional camping place, Millersylvania State Park, where it is lighted and populated; our wolf was still so spooked that she stayed close to Alyna's side while we packed up and boggied outta there. And a loooooooooong time ago, when our daughter was about 12 years old, we were camping in Cougar, WA, and actually saw huge footprints with 6 toes, in a region around Merrill Lake where we were hiking – we have never seen the creature, but our experiences have solidified our belief in Sasquatch, even if people mock us: we KNOW what we have SEEN and what we have HEARD. For the past 12 years I have refused to travel through Chinook Pass again until recently, when the desire to revisit Tipso Lake got the best of me last Spring.

While I can’t personally vouch for the appearance of Sasquatch … I can vouch for the reality of Sasquatch ;-) And I pulled MOD Sasquatch Earflap Beanie design together by utilizing certain features pulled from these 2 internet pictures; and I used Aran yarn because IF Sasquatch migrated to North America from Asia via the ancient land-bridge, MPO is that his hair would not be brown - it would remain true to the Abominable Snowman coloring: like MOD Sasquatch Earflap Beanie pictured above ... 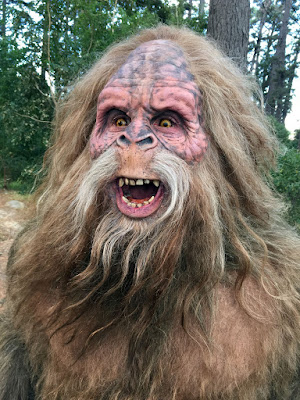 I replaced the red splotchy facial area features with a medium gray coloring because I think that would be more characteristic. MPO 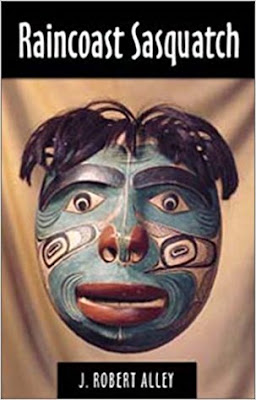 I used the hair idea of this Sasquatch face mask of what Sasquatch looks like; according to the Native Americans in the Pacific Northwest: Southeast Alaska, Coastal British Columbia & Northwest Washington from Puget Sound to Yakutat.

And the garlic? Well, I am cooking a garlicy Chicken meal :-) Chicken soup was the ancient Jewish equivalent of penicillin. And a high dose (41 cloves of garlic?) can reduce the number of days sick with a cold or the flu by 61% (!) … well, I have been sniffling the past 3 days and Hubs mentioned this recipe last night during one of my sneezing fits – so I am baking it … and watching the little birdies at the Bird Feeder :-D 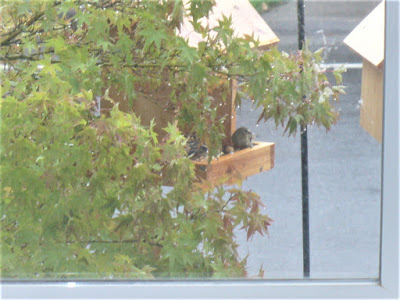 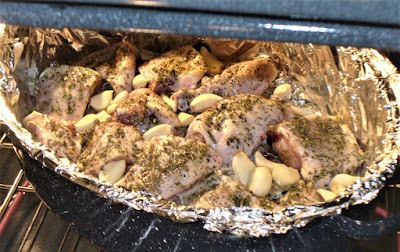 This French provincial recipe sounds strong and bitter tasting, but it really is quite delicately delicious. This recipe is one of our basic Fall/Winter meals. It is excellent accompanied by roasted spuds and a green vegetable side dish.

I line my baking pan with foil because I am a lazy haus frau, and the foil makes for easy cleanup ;-)

This recipe is attended to periodically, so it does take time to cook. But it is worth the effort!

READ THE ENTIRE RECIPE BEFORE BEGINNING …

Blend bay leaf, rosemary, salt & pepper (I use a coffee grinder to mix it up) and season the chicken skin with the mixture. Put the chicken in a small roasting pan. Pour oil over chicken and surround it with the garlic cloves.

Bake, uncovered for 45 minutes. Drain off all the fat and discard. Add wine, cover, and lower heat to 350-degrees. Cook an additional hour, basting occasionally. Remove cover and bake about 10 minutes more, continuing to baste.

Remove garlic from pan, mash and mix with the pan juices. Cut chicken into pieces if you have used a whole chicken, and pour sauce over them.
Posted by Val at 5:58 PM

Email ThisBlogThis!Share to TwitterShare to FacebookShare to Pinterest
Labels: Chicken with 41 Cloves of Garlic recipe