This is a delicious soup, and my favorite when it comes to a split pea soup recipe ;-) I cook this soup all day long in my crock-pot (instruction at end of post) but I am posting the recipe as originally written in my cookbook.

Simmering this soup a long time is what gives it the rich flavor you will enjoy. The flavor also improves with age; if needed add more broth to it when reheating.

And it can be frozen.

In a Dutch Oven pan, combine the peas and water. Bring the water to a boil, and cook the peas for 2 minutes. Remove the peas from the heat, cover the pan and let stand for 1 hour.

Add the broth, meat, celery, leeks, and onion. Bring the soup to a boil – reduce the heat, cover the pan, and simmer the soup for 1-1/2 hours.

Add the potatoes and carrots, and cook the soup for another 15 to 30 minutes (the peas should disintegrate). If the soup gets too thick, thin it with additional broth.

*CROCK-POT DIRECTIONS: Put ALL ingredients above into the crock-pot. Set to Low and simmer 6 – 8 hours. Stir occasionally while cooking.:

**IF USING FROZEN BROTH AND VEGGIES, set crock-pot to High and cook for 6 hours. Stir occasionally while cooking. 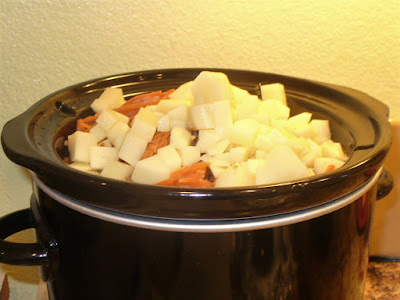 All of the ingredients - except for the split peas - was frozen so it looks like I overfilled the crock, but once it was plugged in and turned on, the ice melted and the ingredients were easy to push down into the broth.

After I got the soup underway, I was walking through the back livingroom past the sliding glass doors, and happened to catch a glimpse of a spot of light purple near my Patio Apple Trees at the far end of the back yard: CROCUSES! What a nice Shabbat surprise :-D And there were hyacinth leaves poking out of the past Fall’s flowerbed litter mulch too: 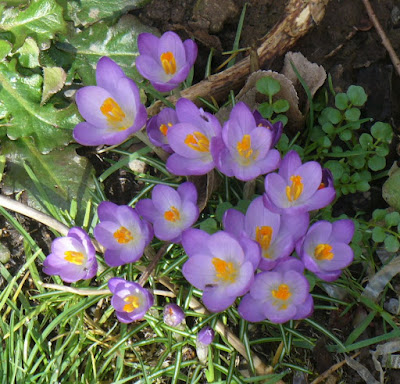 Early Crocuses in the back flower bed; it's still too wet to weed, but the that's okay ... the tiny flowers hide the weeds for now. LOL 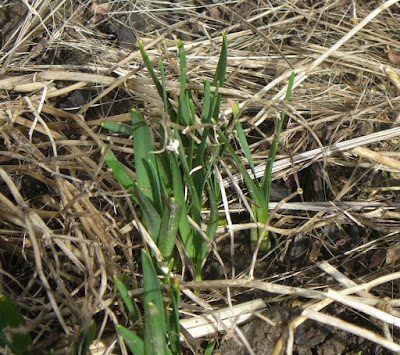 Hyacinth leaves pushing through in the back flowerbed

Then I walked with anticipation to the front livingroom, looked out the window, and saw that the early crocuses had come up in the front flower bed too – what a sight for winter weary eyes! So I ran and got my boots on and stepped outside to see what else was making an appearance; my eyes are so hungry for color and I can’t wait for winter drabness to be over … 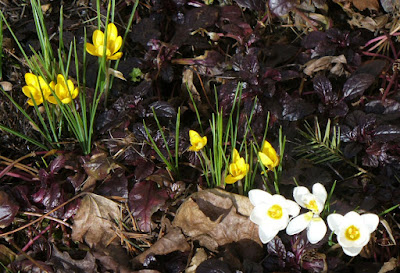 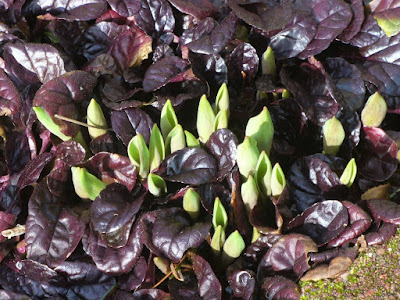 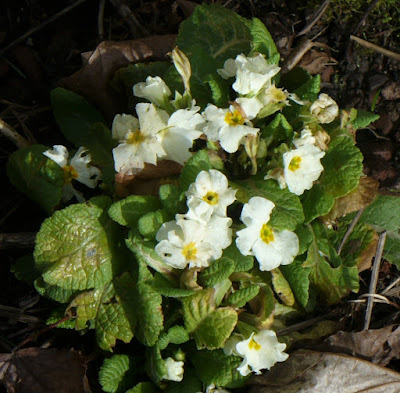 Primroses showing in the front flowerbed; a little bedraggled around the edges due to the stormy rainfall, but otherwise bravely and boldly heralding Spring on the horizon ;-) 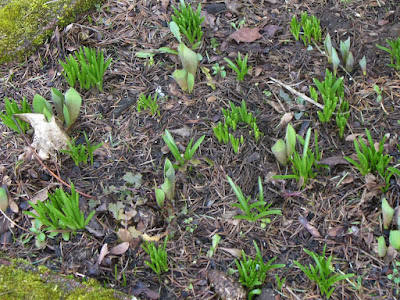 Wild Woodland Hyacinths and Tulips in the front flowerbed