Well, Wednesday and come and gone, and Shaun said they will be back tomorrow to finish up. He originally said the job would take 3 days, so I expected that he would miss his optimistic Wednesday deadline ;-)

He is a nice young man.

I am asking Elohim to bless him and favor him because of his character, and also because he has been so kind to me.

And he hasn’t moved in to cheat me; as most people – I have found out over these past 4 months – will try to do when dealing with a widow. Or just a woman in general, widow or not. 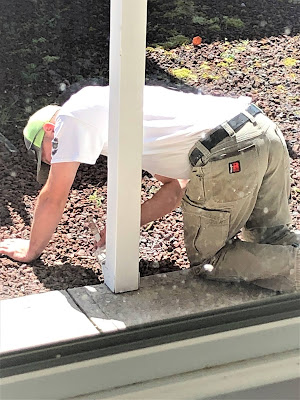 I specifically will not do business with a man that lords his position over his employees (I don’t like egomaniacs on principle), so I liked seeing Shaun get busy too; makes me feel better about the big $$$$ being paid out. 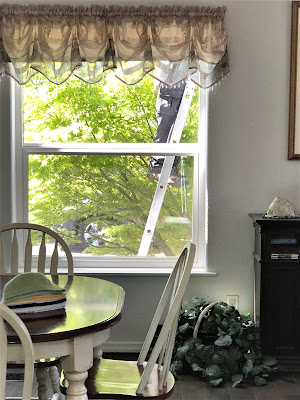 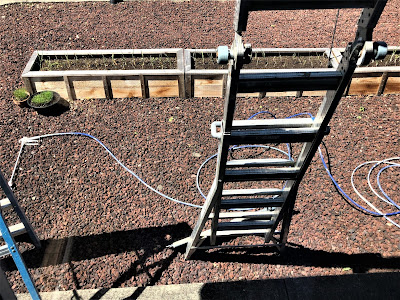 Gutters being painted. And nothing in my veggie garden boxes was damaged. The guys were really careful – I appreciate that in men. 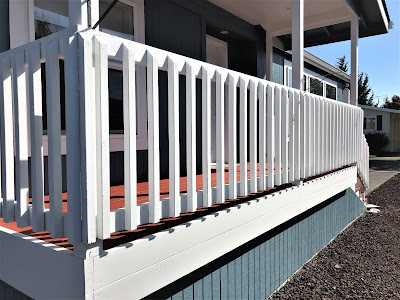 Everything looks so nice and bright!

I am going to enjoy sitting out here when everything is back in place ;-) 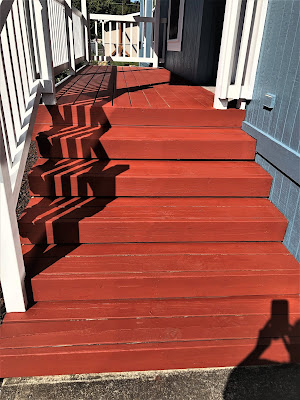 I had both sets of stairs and deck painted with safety sand in the paint. That is what Bob and I did with the last 2 houses we owned, and it sure made a difference when the rainy and icy months came around. Now that I am officially a Senior - and officially on my own, caution is a real necessity on the stairs. 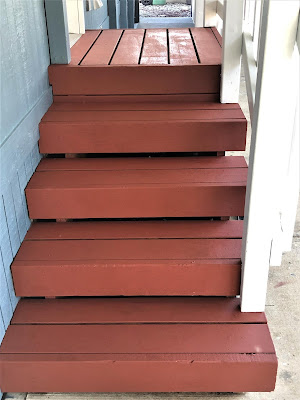 The Carport stairs and deck landing is still wet ... 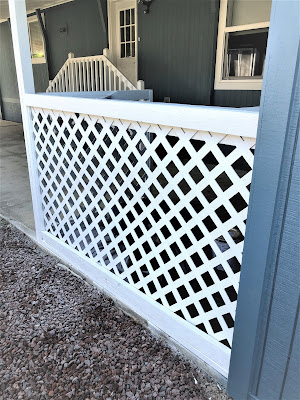 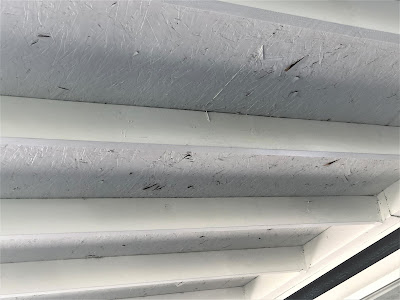 Carport ceiling is peeling as the wafer board does, but it looks better with a fresh coat of paint.

It doesn't look so shabby now when the sun sneaks under the overhang and shines on it. I am hoping the fresh applied paint may actually hold those loose pieces up there longer. 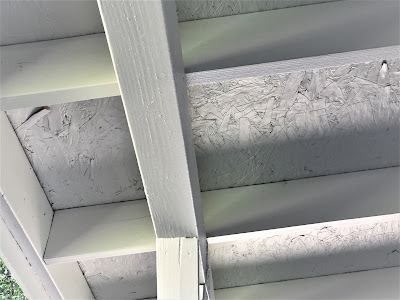 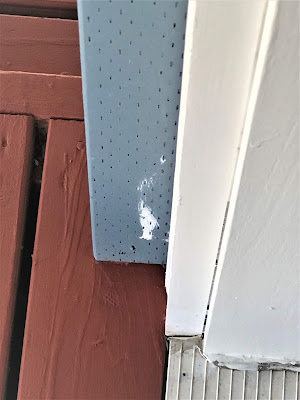 This STILL was not touched-up (https://jeastofeden.blogspot.com/2019/05/exterior-house-painting-day-1.html)

I think they missed it when their pizza was delivered and then got sidetracked when they started working again after lunch break. They were hungry and it got hot today.

I may have to stand over them tomorrow … 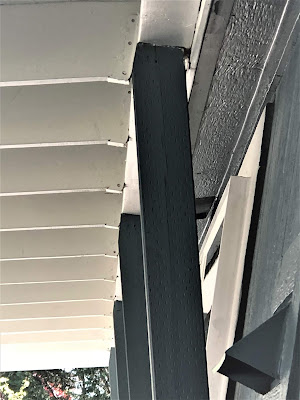 But these 2 were touched up.

I hope and pray tomorrow everything is finished and touched-up, and I can finally start to live in our home. I am really looking forward to settling in here without tripping over construction mess, and breathing in plaster dust.

The interior of our home has not had a thorough cleaning since the August nightmare altered our lives.

That was 8 months ago.

Bob got the better deal, for sure; his physical body died, but his Spirit will never die; and Bob is enjoying Yeshua’s company – who could ask for anything better!

Meanwhile, here on Earth, I would like to give the interior of our home a thorough Spring cleaning once and for all, without plaster dust settling over everything … or irritating my lungs because the ‘simple touch-up’ around the LED lights STILL is not done, and the dust is constantly being stirred up.

Hopefully tomorrow :-D
Posted by Val at 5:55 PM No comments:

Email ThisBlogThis!Share to TwitterShare to FacebookShare to Pinterest
Labels: learning to do on my own, widowhood, widowhood learning curve

Yesterday the fellas showed up bright and early to start painting the exterior of our home.

Before they started, I showed Shaun the 2017 House Inspection report and asked him to please check this issue out:

I Later saw him carrying repair sheet wood, so am assuming it was repaired before painting commenced.

When the windows were sealed, I did feel a bit trapped; the feeling didn’t quite morph into claustrophobia … but it did get a little edgy there for a while ... 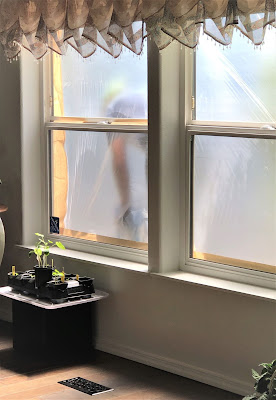 While they were painting the siding under the carport, they had their radio on and I heard Heart’s ‘Magic Man’ song come on loud and clear, and my hand stayed the spreading of the mayo on the sandwich I was making. Normally I’d be singing the song along with the radio – but now it is a bittersweet reminder that my Magic Man is no longer here with me. I teared up and had a good cry; then I wiped my eyes and nose, finished making my sandwich and ate lunch.

Swallowing each bite with a lump in my throat.

‘Happy Together’ by the Turtles, & ‘Magic Man’ by Heart were the 2 songs that best described US. And if we had “a song”, those 2 would be the ones.

So; yeah, it got a bit emotional in the kitchen for a few minutes.

And I felt Bob’s presence too.

This is something that needed to be done, and Bob & I had planned on doing it anyway: we just never figured on me having to do it alone. Widowhood wasn't in the figuring; and while ‘Magic Man’ was playing and after I had wiped my eyes and could breathe easy again, I could see … in my mind’s eye … Bob’s twinkling eyes and his sexy smile, and I could hear some his last words to me, "I have faith in you Baby". It made me feel confident.

I felt we are still doing this thing together: 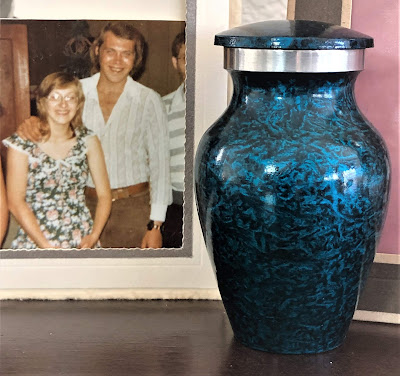 After the guys knocked off for the day, I walked around the house to do a little inspection of my own ;-)

It will be real nice when it is done – and I won’t have to worry about it for another 10 years … and maybe not even then: who knows what the next 10 years holds? I may even be in Heaven, walking those streets of gold with my 2 beloveds, Yeshua & Bob – the 2 loves of my life :-)

But, for now, this is one less Park Rule I have to concern myself with ... 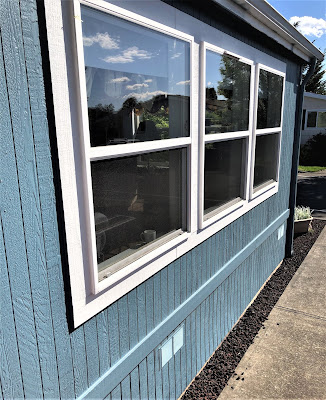 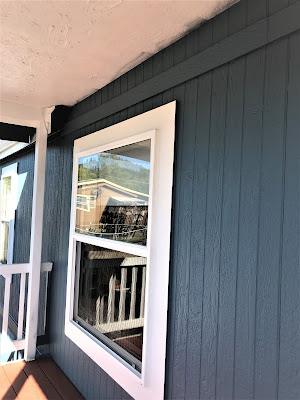 The ceilings and railings still have to painted ... hopefully that will be done today sometime. 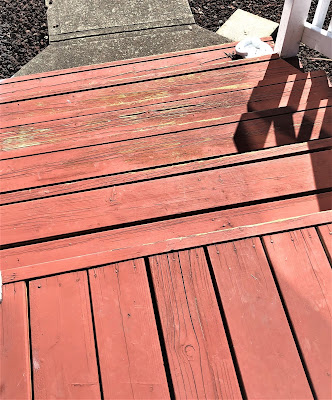 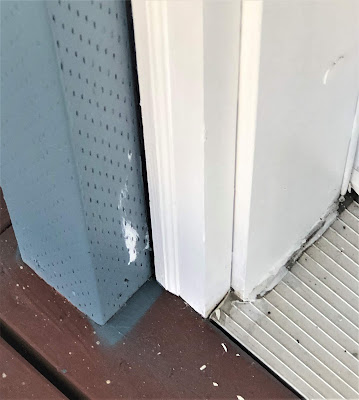 This will need to be corrected before they get paid. 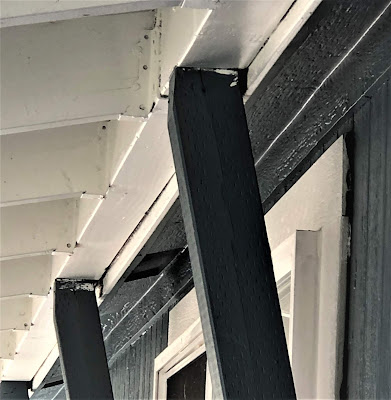 The fellas worked like dogs all day yesterday; and it got hot with the sunshine beating down on them while they sweated, so I cut them a little slack.

Until today – when what needs to be corrected will be pointed out before they get their pay ;-)
Posted by Val at 8:46 AM No comments: