There is so much to do around here before Fall arrives – hopefully Chris will get back from his vacation this week and start on our roof: we’d like to have that job completed before the PNW rainy season starts.

We haven’t taken but one day off in the past 4 weeks – we’re so stinking tired! Seriously: stinking and tired because there’s so much to do in such a short period of time, we are pushing ourselves to get things done; and end the day smelling like it and so tired we fall asleep on our feet if we stop moving most days. LOL 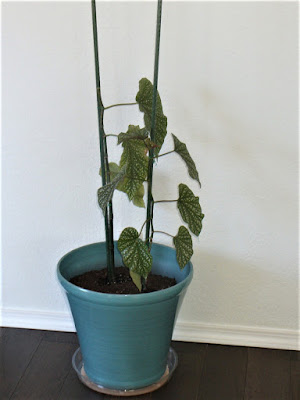 We repotted the Angel Wing plant the other day ... and in the process broke the top off the tallest one because it was awkward to hang onto while we tipped the old pot out; good thing this plant grows fast. 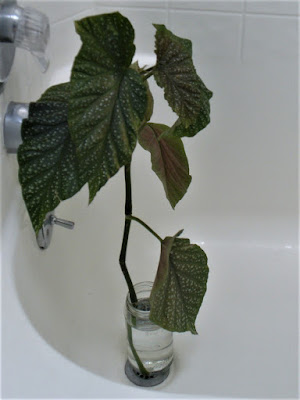 I stuck the broken top into a jar of water and put it in the spare bathroom under the skylight to root.

This morning, Hubs started building my planter boxes so I can transplant my flowers so they get a good root system build before that malevolent imp, Jack Frost, arrives with Fall (just 16 weeks off) and damages them beyond repair: 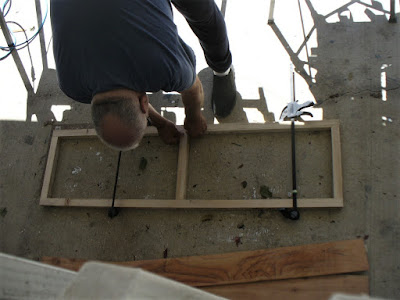 Bob building me my planter boxes ... 1 of MANY to be built. 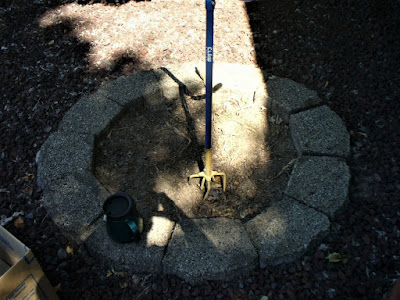 I tore into the circular planter out front - the dirt is set like cement! My digging claw barely made a dent in the hard stuff.

I finally put the claw aside because the tines were worthless on this hard baked stuff, and grabbed my handy-dandy little shovel and managed to loosen & remove several boxes of rocky fill-dirt – I would fill a large box with the crappy dirt and haul it to the large garbage can sitting in the 4x bed: I did this several times. We’ll haul it off to the dump later on: 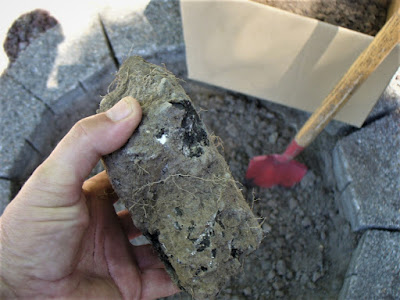 I can't believe they filled this circular planter with black-top chunks as well as rocky fill - what were they thinking ... WERE they thinking at all? 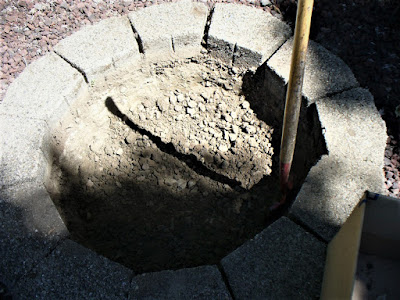 11-inches was as deep as I could dig in this rocky-hard-as-cement-crap. This will eventually be filled with good loose dirt and planted with Shasta Daisies. I like Shasta Daisies for curb appeal because they just seem to say “Hi, and welcome!” ;-) 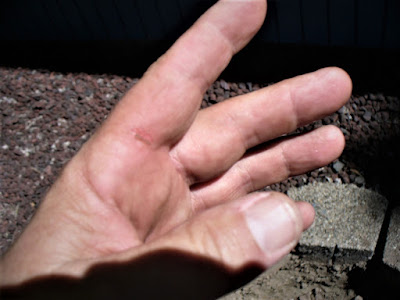 I worked up a good sized blister trying to dig through that crap; I didn’t stop until I could dig no more. The blister broke open.

After about 10 trips from the circular planter to the garbage can, I decided to take a short break to catch my breath, let my old muscles relax, and avoid a heat stroke – it’s HOT here today. While I was sipping my lukewarm coffee and wiping my sweaty face on my shirt sleeve, I watched Hubs working on my new planter box … 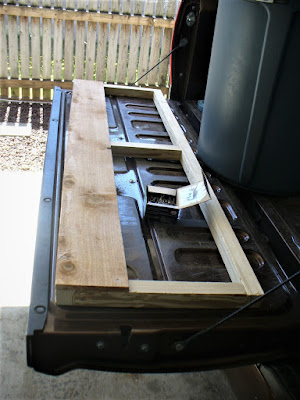 Bottom boards being laid down.

Hubs is using cedar boards to build the box even though he is allergic to cedar sap – and these boards are wet-cut, so they are pungent: this is a real labor of love, and I appreciate it. I love the smell of cedar, but I also know it will cost Hubs in more ways than one to build these boxes, but he wants to use cedar boards because it will last a long time before rot sets in. I have a good man and I never forget that. Elohim blessed me when He brought us together :-D 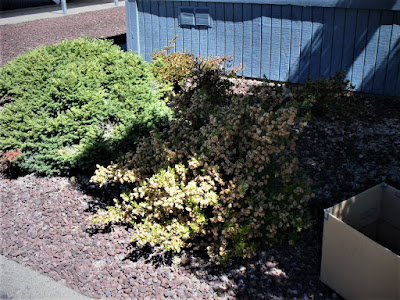 Next I tackled this ugly mess - ALL of it is going; I don't like any of it. I’m not a green  plant person, I like C.O.L.O.R in my landscape, so I'll plant cherry colorful flowers in this space … 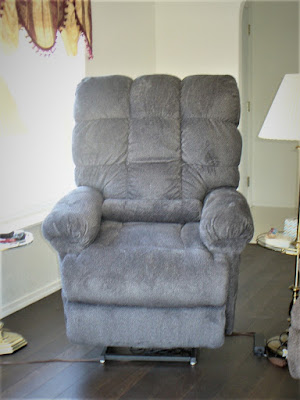 Bob's new recliner arrived while we were both working at our tasks; Bob is gonna love this lift chair; it will take pressure off his knees.

Last Friday we received a mortgage refund from the house we recently sold and it was exactly the amount needed to purchase a lift recliner for Hubs ... so we bought one for him Monday – and we thanked Elohim for ‘going before us and preparing the way’; we NEVER are able to come up with that amount of $$$ at one time, no matter how hard we try. Something always comes up that depletes the savings; but this time, thank The Lord, everything came together and it was possible ;-)

After the boys unloaded the new recliner, hauled it up the front steps, wrestled it into the house and set it up, I took another short break and finished the 1st book in The Clan of The Cave Bear series. We’ve read them before when Alyna was about 3 years old (she’s 21 now), but they are good reads that really pull you into the storyline, so I bought them for 25 cents at the Library Sale a couple weeks ago and we’re doing round two with them: 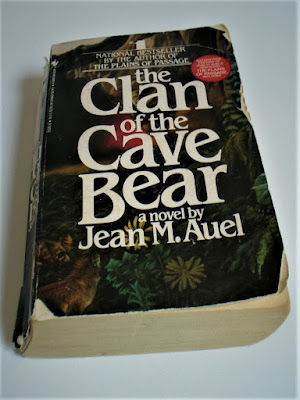 We finally laid off work around 3 p.m.; it was just too darned HOT to continue. But we felt accomplished with what we had done so far. We had time to get to the dump before they closed the gate, so off we went … 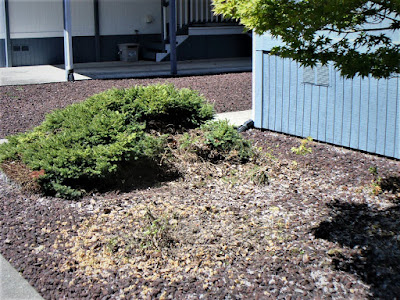 I made a good dent in snipping these bushes down to nothing until it got too hot to do anymore: 3 azalea bushes pruned down to nubs for easier removal; and 1/3 of the evergreen bushy shrub pruned out, but even the big handpick failed to break up that crappy ‘dirt’ around the azaleas’ main root balls! Unbelievable. I'll get back “on it” tomorrow. 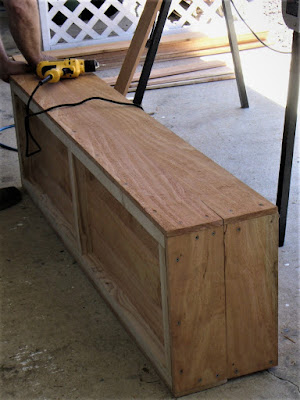 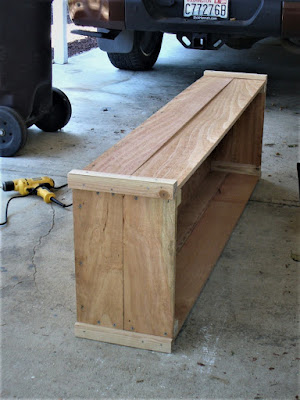 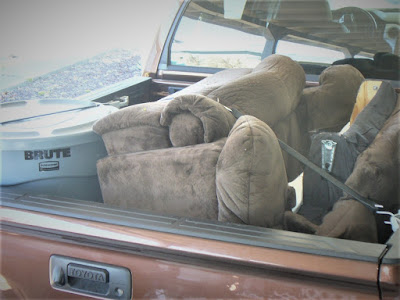 Bob's old recliner went to the dump with a large garbage can of that terrible fill-dirt and 2 large garbage bags of shrub pruning’s.

The garbage can will probably be filled again tomorrow, and hauled off again; but then it will be used strictly for catching rain water for my plants: the can is clean, no garbage has ever been in it – just this ‘dirt’, and that can be cleaned out with a simple swish of the garden hose.

I’ll start the 2nd book of this series after I post this. And I’m so beat from working so hard today that I may fall asleep in my recliner before I finish Chapter One. LOL 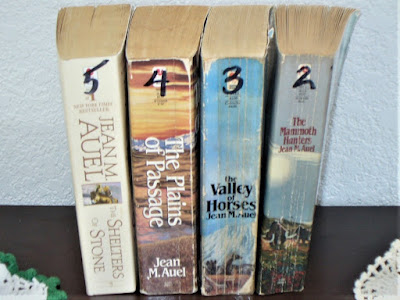 Starting on Book 2 tonight ... and I may start a new design series on this earth timeline because I think the Pleistocene era is interesting.
Posted by Val at 8:30 PM No comments: