cnn anchor twits can’t take what they dish out … so they throw childish temper tantrums and wonder why no one takes them seriously or considers them adults.

Stone was punished for his {offending tweets apparently violated the company’s policy against harassment and intimidation}, BUT R.A.C.I.S.T. black nationalist, lemonhead lemmon who openly condemns Caucasians and Jews from his cnn ‘host’ stool can continue to spew his racial dribble? I find it ironic that lemon would whine and bitch like the queen he is about Stone’s tweets when HIS ARE THE SAME AND SO MUCH WORSE. And tapper’s claim to fame? Basically that he dated monica lewinsky a few weeks before the blue dress made National Headlines – seriously, 2 political whores whoring for the media; hardly noteworthy to anyone but them … and I’m sure Stone was onto something with his tweets about tapper. As for the growling, sneering, rabid navarro who thinks 'republicans need to grow a spine' - why doesn't she? If a simple tweet from Stone can bunch her pullup (as in baby diaper) panties into a painful twist, maybe she should leave the playground, sit down, SHUT UP, and "grow a spine"; in short, be the  adult she thinks everyone needs to be, and act accordingly instead of behaving like a sniveling, bitching, racist crybaby like lemonhead lemmon and political whore tapper. Where to start on bloated-faced, whiney-voiced, sissified kristol? It is crystal clear that cnn's chubby buddy kristol isn't too bright ... maybe if HE got OFF twitter and stopped feeding on obamanite BS, he'd shed a few pounds and clear the paranoid racist cobwebs from his addled brained mind. In short: squat, crybaby, sissy-voiced, chubby, angry, racist kristol isn't too crystal when it comes to reality - Stone nailed that one too. bernstein is a traitor - e learned a LOT from his watergate years, and has been implementing those tactics ever since. That he {contributes} that 'knowledge' in every way imaginable to cnn is scandalous behavior, not heroic antics. bernstein is a 'malignancy' in the journalistic arena; and like any cancer, when disturbed, it spreads its poison like wildfire - infecting everyone and everything it touches. And blow? he's a rabid obamanite with a bone of racial contention stuck in his craw.

In summation … these political media whores are all amped up and outraged because their political gods’ clay feet were shattered and their FAKE gold plated characters are tarnished, underscoring the rot beneath the façade. cnn’s staff of woefully ignorant and blatant arrogant racist queens and wannabe kings are throwing a temper tantrum. And like any red faced brat that has been spanked, they plot revenge, too stupid to realize that they, themselves, will reap the karma they think to avoid. Brats are an annoyance, but they are never taken seriously, and wise ADULTS never give them free rein to do as they please. These brats will be brought up short in sort order. The obamanite reign of insanity is coming to a close; they may win a few skirmishes, but in the end, they WILL LOSE the war they started. It's in the writ they refuse to see.

So consumed by the raw hatred they feed on and pass off as journalism and real news, cnn's brainwashed minions and the rest of the obamnites are too stupid to realize they are stoopids being taken for a ride on a crazy train that’s gone off the rails …

Well, today was the 1st of my scheduled Fall/Winter Bazaars – I am only doing 3 this year; 9 was just too much last year, so I decided to cut them back since I am in it for the fun and socialization more than I am for the $$$. I get a kick out of seeing people admiring and buying my original designs … and I like putting one day every week or so aside from the end of October to the start of December each year to chat with strangers and visit with long-time friends ;-)

This morning, while dawn was breaking, we started the adventure early since it takes roughly an hour or so to drive from our home to Rosburg Hall; depending on the traffic. The highway was pretty open and the drive was fairly peaceful until the other side of Cathlamet, where we met an army truck crawling slowly along our lane ahead of us – what on earth was an army truck doing in the boonies? That was a strange sight to see on a dark highway shrouded by the shifting specter of low-lying river fog. We passed it and continued on, drinking our coffee and talking about everything and nothing in general to stay alert and clear the cobwebs. And then – about 40 minutes further on, as we were entering Graysriver; just the other side of the Covered Bridge turnoff, we met another army truck crawling along. It was getting downright freaky to be truthful: I didn’t like it. 2 army vehicles silently creeping through the dark fog-shrouded-early- morning hours on desolate dawn-rising country backroads just doesn’t set right with me. It was kinda sinister. And just plain weird. Why were they there? What purpose were they serving? Why all the secrecy and covert action? Too much activity and too many question for such a sleepy head … so we passed that one too. And reached the Hall mere minutes later.

We always enjoy spending time in that neck of the woods: Hubs is related to nearly everyone in that region, and I spend many, many, summer days in that region, walking for hours from my mother’s house in Skamokawa to Graysriver, Altoona, Pillar Rock, and Naselle when I was a teenager: I’d literally be gone all day long. In those days, one could walk freely along the highway and byways without being accosted or molested – I would never have allowed my children or grandchildren to walk hours from my home to another county today! It would not be safe.

Anyway, while there today … we enjoyed the festive atmosphere, the customers, the relatives, the new faces, and the profits ;-)

In short, we had a great time and came home richer than when we left :-D A lot of older stuff sold; but I do not have pictures of those items to post – my last laptop ate them when it went crazy. I am glad, though, that they sold, because now I can make NEW things to replace them. LOL!

And the cute crocheted UFO & MOD Aliens that I worked up and tagged a few days ago, was one of the items that SOLD right off … some lucky little boy will get it for Christmas: (https://jeastofeden.blogspot.com/2017/10/ethnic-roots-winter-soups-country.html).

All in all it’s been a good day.

Next week we’ll be setting up in Rose Valley, a little closer to home; it will be our first show there. We spend a lot of time in Rose Valley, but I've never done their Bazaar: I'm excited - I like a change of scenery.
Posted by Val at 6:38 PM No comments:

We get our meat in bulk packages from an old-fashioned meat market that raises, butchers, and sells fresh butchered meats. We make the 5 hour long drive twice a year, but we are thinking of cutting our meat consumption in half this year, so we’ll only be making the drive every Spring from now on.

Due to the meat packages we purchased in May this year, we have an over-abundance of pork sausage. So while looking over the freezer fare the other day and seeing the stacks of pork sausage, I thought of this recipe and decided to make it this morning. I like sausage when the weather turns chilly – I like it fresh fried with eggs and toast/pancakes or waffles … or fried ahead and packed into an impromptu lunch with hard-boiled eggs and challah bread either at home or quickly packed up for a spur of the moment daytrip.

These patties are heady with fall/winter spices and they smell heavenly while being put together and fried. And the taste is, of course, wonderful! 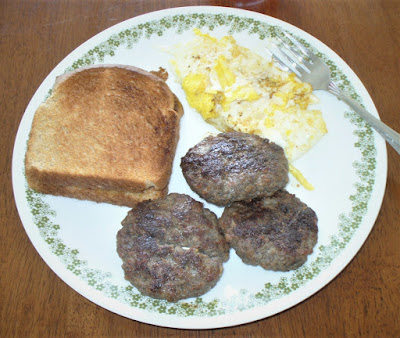 If there are any leftover patties … they can be wrapped tightly and frozen for up to 3 months.

In a 1-2 quart pan over high heat, bring wine and pickling spices to a boil; remove from heat and let cool to room temperature – about 45 minutes. Pour through a strainer into a large bowl; discard solids.

Shape about 1/3 cup (about 3 oz) pork mixture into an oval patty about ½-inch thick. Place on waxed paper-lined baking sheet. Repeat to shape remaining mixture into patties, stacking them in layers separated by sheets of waxed paper.

Fry patties in a 10 to 12-inch frying pan over medium heat, turning as needed, until browned on both sides and no longer pink in the center – about 10 to 15 minutes total. Serve and enjoy!