My day started out with a 2 strike call, concerning our bank … 1 more strike and I am moving my account to another bank.

I KNEW being forced by our bank to close our old account with them and open a new account in my name would spell trouble with a capital T, but no one would listen to me – they were “educated”, and supposedly “knew the way things work”.

This morning, giving in to a hinky feeling I had, I called our bank to inquire about my Social Security deposit: NOTHING SHOWING.

Just about what I predicted would happen when our bank forced me to do what I did not want to do. I asked them THEN if there was going to be a problem, and they said, “no.”

Well, THERE IS A PROBLEM Houston!

So, after I hung up, I drove into town to the Social Security Office and asked what the hold-up was, and would this month be skipped due to the confusion?

I was told that my Social Security Benefits had been sent TO THE CLOSED-OUT ACCOUNT, so NOW it has to BE SENT BACK to the SSA and get “redirected” BACK to my new account. What a F#@&ing mess! All to benefit the bank's stupid accounting system. It sure as hell isn’t benefiting me.

I was pretty peeved with BOTH institutions.

And I have bills coming due – so I came home and called every one of the creditors, explaining my situation; some were understanding and gave me a compassionate grace extension to pay them when the $$$$ arrived: some were snarky and want their monies BEFORE the benefits will arrive, or “service will be disrupted and will need to be reinstated with a $35 fee attached.” To which I responded, “Well. I can’t control the government, and I can’t control the business world”, before hanging up; before they gave me anymore snarky lip-service about circumstances that are out of my hands. 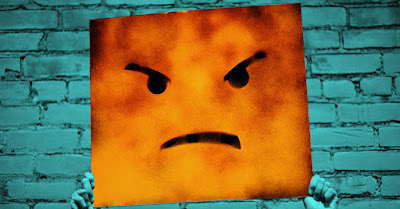 Needing to redirect my thoughts and burn off some tension, I went outside to water my garden beds, and saw that I have a baby zucchini:

Feeling better after spending time chilling with my veggies, I decided to walk around the Park for full-body/emotional balance. I noticed 2 more houses have gone up for sale since I last make the Park mile loop – that makes 8 houses since Spring that have been sold due to Candy’s insane egomaniac overreach.

And someone else likes big metal spheres, because there was a new one in place on the back end of the Park loop; remember the 1st one I posted?(https://jeastofeden.blogspot.com/2019/06/getting-stuff-done.html) 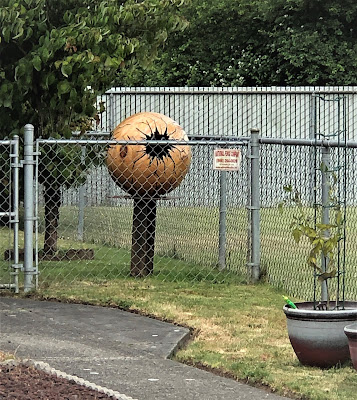 On the last leg of the homestretch lap, I noticed raven decoys had been set out on one corner lot – I like campy things, so the ravens kinda drew my eye … 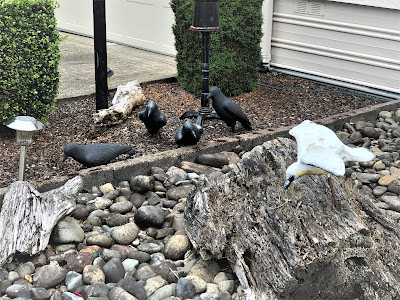 And, THIS also caught my attention, walking past the clubhouse: 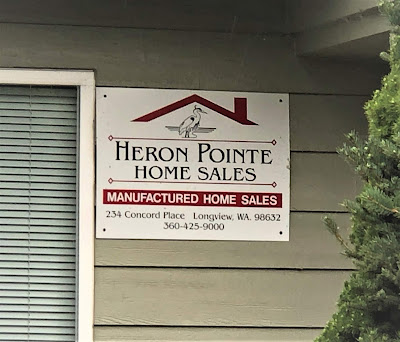 ILLEGAL ACTIVITY. This is a Real estate violation; it is illegal for mobile home parks to have on-site realtors, freezing out freelance realtors. But, Candy Scott thinks Laws do not apply to her – she and Ron Cook have a lot in common concerning that mindset. If we had known about the crooked foundation Heron Pointe was operating on, we never would have bought a home here. Now, I am stuck here.

Then I felt raindrops, and was thankful home was only a few feet away …

At home, I was further reminded of Candy’s tweaking to suit her own ends:

LONGEST 2 WEEKS IN HISTORY.
(https://jeastofeden.blogspot.com/2019/05/retirement-was-short-lived.html). It has been FOUR weeks since the Office blowout with little hitler. If his house “has sold”; he must BE the buyer, because he is still here, and shows no sign of moving on.

Yeah: I am peeved.

BUT, I do believe karma is paying attention ;-)

I got the mail and opened my envelope for space rent due, and read the enclosed notion, wondered if Candy realizes that the karma she “believes in” recently paid her a visit? Probably not; she is too busy telling herself she is untouchable. But, I see things differently than she does. I really DO believe people who create their own drama deserve the karma they reap: like hitler, Candy whips up drama and serves it with wicked glee to everyone (except her pets, Ron & Tessa), about everything. And that is why HALF the Park has sold and fled in the past 22 months …

Candy is all about Candy.

So, now little hitler will reap what she has sown: 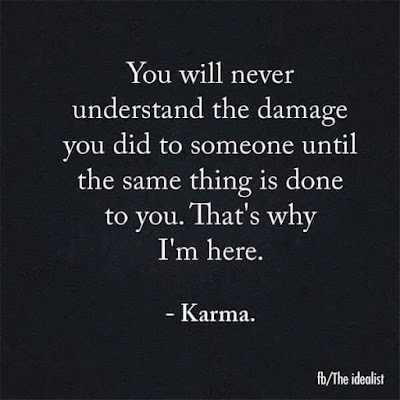 It did start raining pretty good during Dinner - I hope my rain barrels are filling this time. And when I took the garbage out, I saw a beautiful rainbow in the sky :-D

Though the rainbow and lightning was pretty cool to see, Tessa’s house is not; homes like this are NOT supposed to exist here at Heron Pointe – but Tessa, like Ron, is one of Candy’s pets, and she will not bring them to heel.

Park rules STATE clearly that decrepit structures like Tessa’s are to be issued a warning to be cleaned up, and IF IGNORED, tenant is to be evicted. Candy bitches every month in her worthless newsletters that “homes must be maintained as not to be an eye sore in the Park.” YET, she steadfastly REFUSES to deal with Tessa’s rebellion to ‘maintain’ her home and her lot. Tessa’s house looks like a condemned building, and the yard looks pretty much the same as the house.

That American horror house covered with black mold and badly in need of a fresh paint-job, and the wildly over-grown yard is my view everyday under the idle {management} we currently have.

But the rainbow was spectacular :-D

And the rest of the park is beautifully landscaped, and the home are carefully maintained: Candy is quick to make sure the rest of us toe the line (https://jeastofeden.blogspot.com/2017/07/downtime-day.html)

Karma sees everything everywhere; and karma never forgets an address ;-) 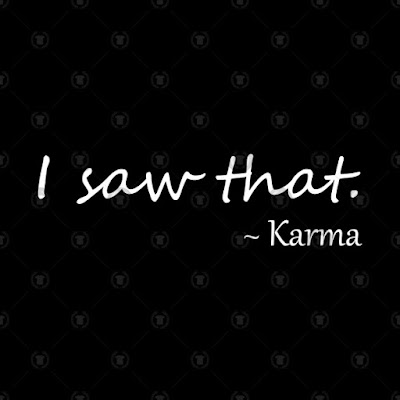 Karma plays by the “3 strikes, you’re out” rules.

The game has been set in motion, as Candy noted in her July newsletter, highlighted above.

I can be patient.

I wonder how long it will take before she realizes karma has her address on speed dial. 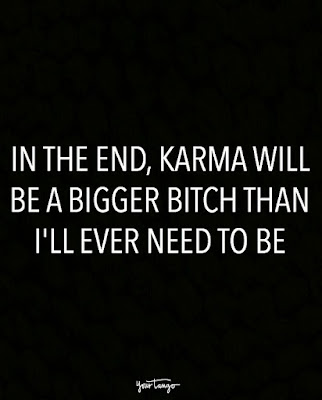